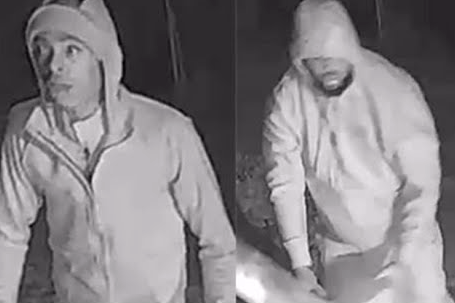 Philadelphia police are searching for two men who set fire to a home in East Mount Airy on Saturday, Dec. 21, 2019.

Two suspects who lit a home on fire in East Mount Airy on Saturday are being sought by arson investigators after video of the incident was recovered by Philadelphia police.

The fire occurred around 4:15 a.m. in the 7400 block of Rugby Street. Footage of the incident shows two unknown males dousing part of the property with a flammable liquid. Soon after, flames are seen leaping from the side of the building after the suspects launched a Molotov cocktail, police said.

Authorities said a mother was at home with her child at the time of the fire, according to FOX29. When she heard the fire alarm, she noticed flames outside near her air conditioning unit and was able to evacuate safely with the child.

Anyone who recognizes the men seen in the video or has information about this incident is asked to contact Philadelphia police at (215) 686-TIPS or email tips@phillypolice.com.