Scrutiny of Michael Rashid has intensified following an op-ed he wrote, advocating marriage as a means to end Black poverty, and the discovery of his inflammatory social media posts 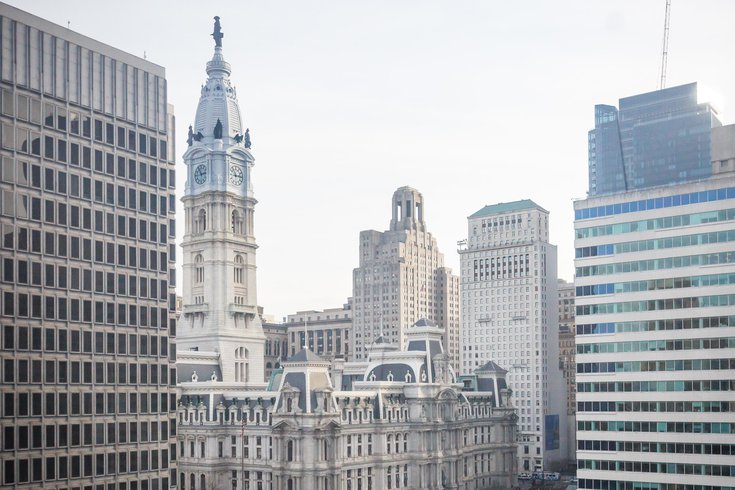 Michael Rashid became director of the Philadelphia Department of Commerce a year ago. Now, at time when the city should be relying on the department for its financial recovery from the effects of the COVID-19 pandemic, officials are instead faced with controversy caused by Rashid's 'toxic' managerial style and inflammatory social media posts.

As Philadelphia emerged from its COVID-19 lockdowns a year ago and city leaders began wondering how to get back thousands of jobs and deal with full streeteries and empty office buildings, Mayor Jim Kenney appointed Michael Rashid to lead the city's Department of Commerce.

Rashid was a retired health care executive and consultant with a sterling resume that included service on President Obama's National Council on Minority Health and Health Disparities. 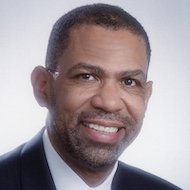 And in the single year he's headed the department, it's gone from grappling with COVID-19 to a new, additional crisis involving Rashid's judgment, leadership and what some are call "bullying" tactics, especially against Black women, multiple current and former staff say.

Then there's the rogue op-ed he wrote, insisting marriage and childbearing are keys to ending poverty across the Black community that was published days before Thanksgiving.

Dig a bit more and find Rashid's history of inflammatory messages on Facebook about Christianity, or maybe hear about the time the department head called the story of Schindler's List mere moneymaking "propaganda?"

According to the city and sources in City Hall, since Rashid took over the Commerce Department have been multiple departures of key staff.

The department is in such disarray that high powered firm Accenture – retained by the city for $505,000 in taxpayer dollars for strategic planning – is focusing on "actionable insights for staffing and operations," including a recent staff survey.

Kevin Lessard, a spokesperson for the mayor's office, explained that most of the vacancies – 13 of 19 – are due to the budget increase following austerity cuts during the pandemic. Yet, six vacancies in the comparatively tiny Commerce Department are the direct result of staff attrition, also known as people "moving on."

And, there reportedly is about to be a seventh person leaving this week.

Rashid took the helm of the city's conduit for its private business community on Nov. 30, 2020. It's been a difficult year after an already difficult pandemic, but the key department vacancies are particularly notable.

In one of the more inflammatory anecdotes about the department head, a source said Rashid once called the story of Oskar Schindler, as detailed in the book and Steven Speilberg film "Schindler's List," mere moneymaking "propaganda." The Academy Award-winning film depicted a true story of Jewish survivors of the Holocaust.

Rashid insists that the comment was taken out of context, according to a statement provided via the mayor's press office.

The kind of context that would make the comment inoffensive is unclear. "It was insensitive and inappropriate for me to make," Rashid said, adding that he's attempted to provide "steady leadership through incredibly challenging times."

One source, a current employee whose name is withheld for concern of retribution, said Rashid's commentary and "toxic" management style have alienated Black women, in particular.

Just recently, staff exploded after enduring a year of Rashid's bloviations and microaggressions and demanded that Black women be respected and listened to, this source said. Another, a former employee, said she has since left the department and is finally "happy."

"Not only was my experience and knowledge ignored, but I, along with other Black women, were consistently dismissed, humiliated and belittled in front of each other in meetings and in front of our staff," she said. She added that working under his leadership is what she assumes the 1950s were like for Black women.

"I know I have much work left to do to build the open, honest and accountable Commerce Department that the City deserves," Rashid said in his statement. "I will be working with the Employee Relations Unit for the City to ensure our Department can fulfill its mission in serving the people and businesses in Philadelphia while ensuring our employees feel supported and valued."

PhillyVoice started looking into Rashid's background after a curious op-ed published Nov. 21 by the Philadelphia Tribune. The piece was published under the headline, "The best path to wealth building." It was not authorized by the mayor's office, though in the first sentence and in the article's tagline, Rashid identified himself as Philadelphia's commerce director.

City staffers were blindsided by the essay, which advocates that getting married and having kids is the primary way Black Americans will end poverty.

"While the Mayor has consistently supported the need to build wealth in communities of color," Lessard said, "the message relayed through the op-ed and its focus on marriage is not an official position and far too narrow a look at the issue."

Lessard cited the systemic and institutional barriers and intersectionality of these barriers, saying the Kenney administration is focused broadly on dismantling those for all people of color, not just people getting married and having children.

Whether LGBTQ couples factor into Rashid's vision of ending poverty or how "it's cheaper to keep her" than get divorced, as Rashid wrote, factors in issues like domestic abuse, feminism, or modern family structures also is unclear.

At the time of Rashid's appointment, Kenney declared the Northwest Philly resident had an "unmatched combination of entrepreneurial passion, long-standing relationships, and a business savvy that will be crucial for Philadelphia" amid the COVID-19 pandemic.

Crucial is right: Pew Charitable Trusts reports that the city's jobs are still down 8.2% since comparable periods in 2019 before the pandemic.

After retiring from health care in 2014, Rashid worked as a private consultant. On Facebook, he indicates a connection to PHLpreK provider, Mecca Academy in Northwest Philadelphia, as of August 2020.

PHLpreK is the no-cost quality pre-K program started by the Kenney administration. It's arguably the flagship initiative funded by the Philadelphia Beverage Tax, commonly known as the soda tax.

The posts, all still discoverable by PhillyVoice around mid-day Thursday with a cursory search in the Facebook app, appear to violate the social media policy for city employees, which calls for "common sense," especially for those working in highly-visible, public positions – like being the director of a city department.

The Kenney administration said it followed its exempt hiring policy and vetted Rashid with a questionnaire and background check from the Office of the Inspector General. Yet, this process is not as thorough as the one the administration followed in making Kenney's first appointments after he won the mayoral election in November 2015.

In that process, staff supplemented its research of job candidates with at least basic searches of the internet and social media.

In one particularly provocative Facebook post, Rashid takes to quoting Malcolm X, observing that "Jew Town" has Jewish shops but that Black neighborhoods have no such community investment. 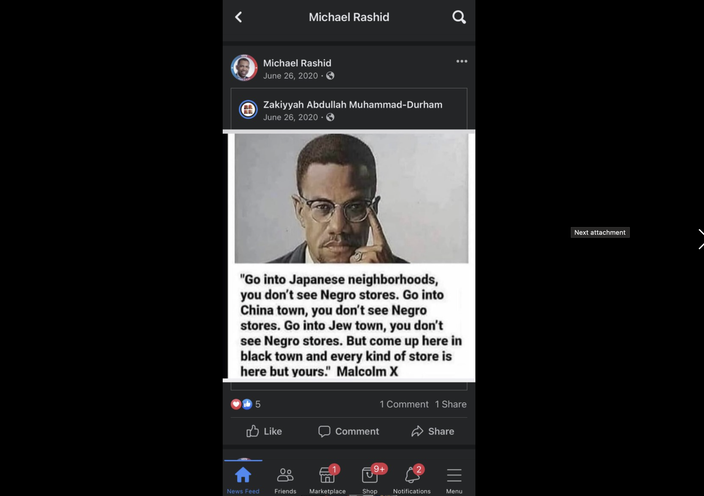 He also shares content quoting former French President Jacques Chirac saying that "white miseducation" prevents "black retribution." There is no evidence of Chirac saying this, though the now dead French president was known as a friend of former colonies in Africa and believed in Western powers atoning for the sins of slavery and colonialism. It could have been said by him, but no source, at least in English, could be pinpointed. 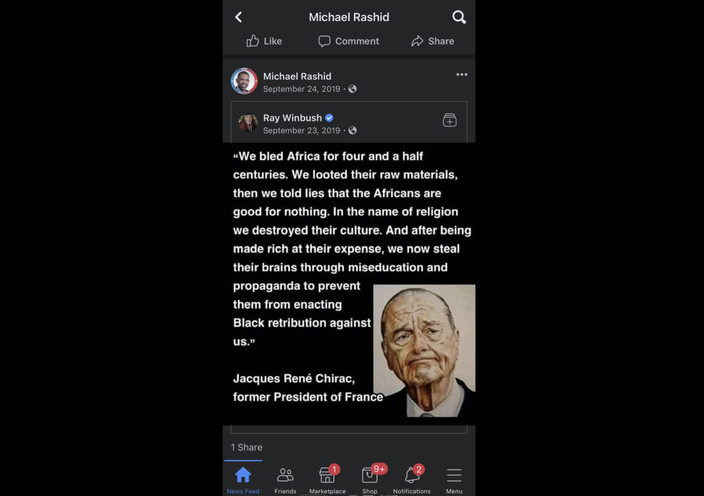 In another Facebook post, Rashid criticizes the way some Christians depict Jesus Christ, saying that a white Jesus is a "psychological tool" that "subliminally engrains the myth of white superiority into the subconscious minds of people of color." 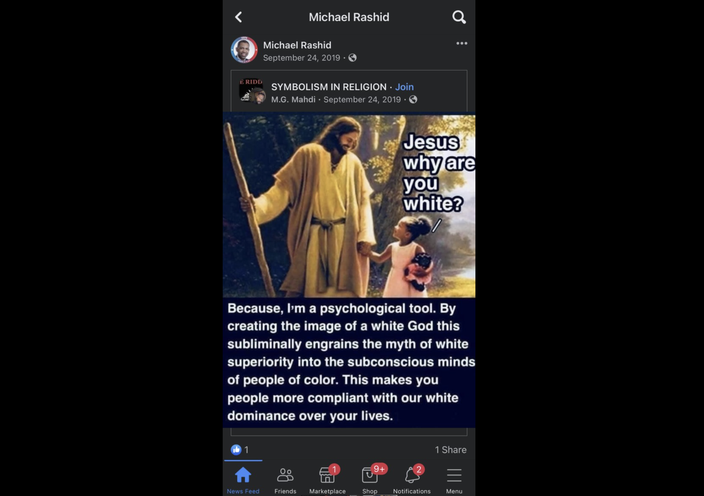 The Jesus post pales in comparison to his share on April 29, months after he had taken charge of the Commerce Department.

That post, a share from Instagram, reads, "Black culture has too (sic) stop glorifying Thugs these n***as haven't shot one klansman or racist's (sic) cop. Only you and your family." 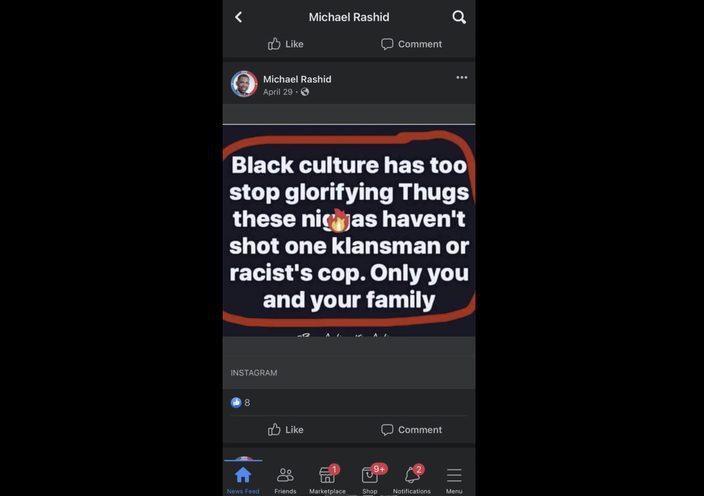 Asked if Rashid endorsed shooting police officers so long as they were deemed by the assailant as racist, neither Rashid nor the mayor's office directly answered the question.

Kenney said he doesn't support the messages in any of the posts, calling them "inappropriate and offensive." City officials also said that at least one of the sampling of posts PhillyVoice provided via email – the one about racist police – appears to violate the social media policy for Philadelphia employees, and as a result Rashid will be given "retraining."

And that $505,000 management consultant? The results of the recent staff survey should become public – eventually.

Josh Kruger is an award-winning journalist in Philadelphia. He spent several years as a columnist with an alt-weekly newspaper and his byline has appeared in publications like The Advocate, the Philadelphia Inquirer, WHYY, Philadelphia magazine and the Philadelphia Citizen. He brings a unique combination of lived experience with homelessness, addiction, HIV, and local government service to his writing, working for years in communications under the Kenney Administration. His latest print piece, "Jim Kenney's Very Bad Year" appears in the December 2021 issue of Philadelphia magazine.