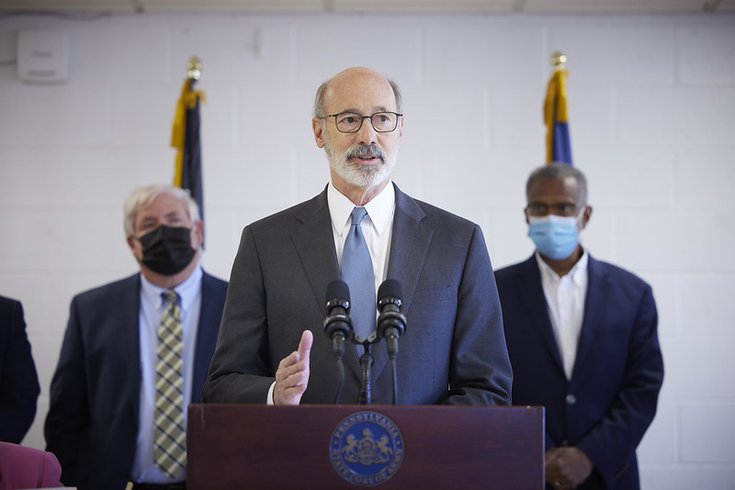 'This is a veto against harmful legislation that puts public safety at risk across the commonwealth,' Pennsylvania Gov. Tom Wolf said Thursday.

Pennsylvania Gov. Tom Wolf has vetoed a bill that would have made Pennsylvania the 22nd state in the country to allow all gun owners the right to carry an unchecked concealed weapon.

Wolf said Thursday that the measure would have worsened gun violence across the state, as well as put more residents and law enforcement in harm's way.

"This is a veto against harmful legislation that puts public safety at risk across the commonwealth," Wolf said.

The Republican-sponsored bill would have ended Pennsylvania's license-to-carry system and made carrying a concealed gun without a permit legal. Gun owners would not have needed to obtain a concealed carry license and pass a background check performed by law enforcement.

The legislation would have also allowed for open carry without a permit in Philadelphia and reduced the legal carrying age from 21 to 18 years old.

As the measure passed through both houses of the General Assembly last month, Wolf pledged to veto the bill, arguing that it would put concealed firearms in the hands of the wrong people.

"Domestic abusers and other dangerous criminals should not have the ability to carry hidden weapons in our communities," Wolf said.

Supporters of the bill argued that it would have strengthened second amendment rights and that gun owners who go through the necessary criminal background checks to obtain a concealed firearm permit are the least likely to commit an offense. Under current law, gun owners can carry their weapon visibly on their belt without a permit, but could be charged with a felony if the firearm is concealed.

But opponents of the measure, including Wolf, cited the increased number of gun violence-related deaths across the state. For example, Philadelphia has tallied a record 512 homicides this year. Wolf also cited an 11% higher rate of homicides in states without concealed carry licenses.

"Each year there are more than 1,600 victims of gun violence in Pennsylvania," Wolf said. "These victims and communities deserve to have meaningful legislation passed to address the scourge of gun violence."

No law enforcement agencies in Pennsylvania came out in support of making unlicensed concealed carry legal across the state, according to Wolf.

"I stand with them, domestic abuse survivors and advocates, responsible gun owners and victims of gun violence who have expressed their opposition to this dangerous bill," Wolf said.

About 360,000 license-to-carry background checks have been processed so far this year, with nearly 11,000 having been rejected, according to Wolf. More than 311,000 concealed carry permits were issued in Pennsylvania last year.

I just vetoed Senate Bill 565. It would have made it so people didn't need a license to carry a concealed firearm

We must take action on gun violence and keep Pennsylvanians safe.

Zero law enforcement agencies supported this bill. I stand with them and victims of violence.

There are 21 states where permitless concealed carry has been legalized, according to the U.S. Concealed Carry Association. Among the states that allow the practice are Arizona, Texas, Maine and New Hampshire.

In Arizona, license-free concealed carry led to a 44% increase in gun-related aggravated assaults in the state over the course of six years after it was approved in 2010.