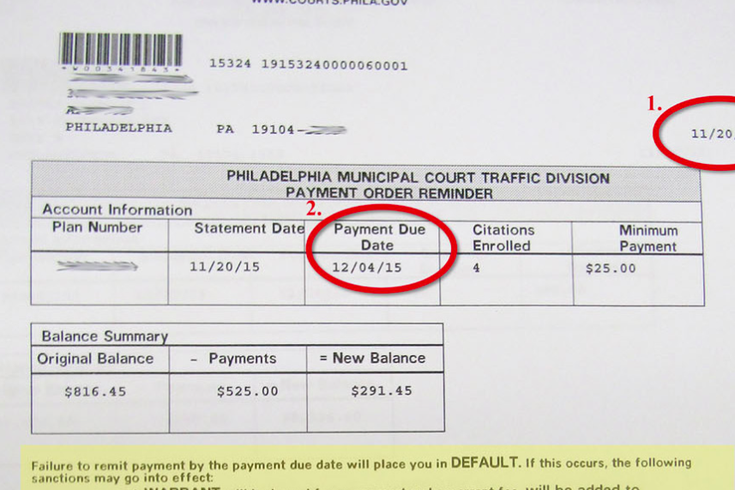 An undelivered payment order reminder from the Philadelphia Municipal Court Traffic Division is one example of mismanagement cited by the City Controller in the Mail Distribution Center.

A new report from the Philadelphia Controller's Office details systemic mismanagement in the city's Mail Distribution Center that has impacted tens of thousands of Philadelphians, according to estimates.

The findings, issued by City Controller Alan Butkovitz, come from an initial investigation into the delayed delivery of time-sensitive documents and excess postage costs stemming from a failure to apply lower rates.

Investigators in the Controller's Office found, for example, 4,000 water bill notices that became backlogged in the Mail Center one day before the payment due date. They also found subpoenas for traffic court that were undelivered on the date of the court hearing, delayed municipal court notices and parking violation notices that were not mailed out within the 10-day period to contest or pay the fine.

“While our findings are part of a more in-depth investigation, we are deeply concerned with our initial discovery and we felt it necessary to report to the public immediately,” said Butkovitz.

In addition to delayed mail processing, investigators found signs that the Mail Center is wasting money on postage costs. Several skids of mail were processed at 48.5 cent rates instead of the presort rate of 39.1 cents, which Philadelphia has the capacity to utilize through its sorting machines. Three separate mail processing runs at the higher postage rate led to excess postage of $1,218, according to the preliminary report.

Operated by the Department of Revenue, the Mail Distribution Center is responsible for gathering all city-related correspondence to Philadelphia residents and those who do business with the city.

“We anticipate that the Revenue Commissioner will take immediate actions to improve the Mail Center’s operations,” said Butkovitz. “Any findings from our ongoing work that involve a criminal matter, as was the case in our investigation of the Sheriff’s Office and Charter Schools, we will forward to the appropriate agencies.”