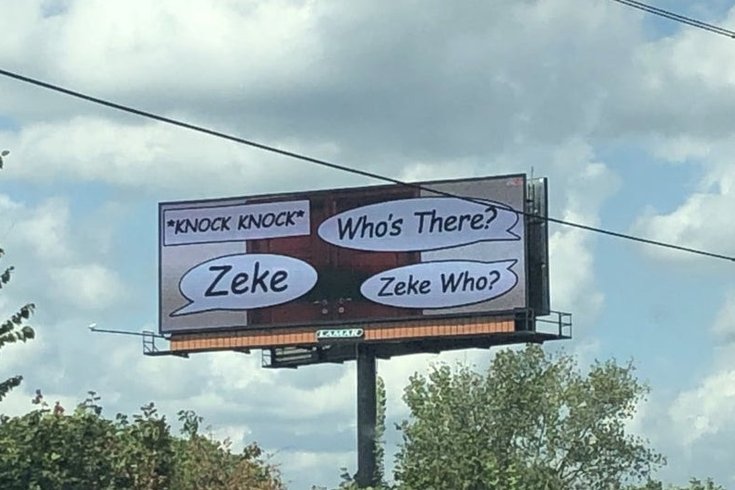 A billboard near I-95 in the Philadelphia area teases Dallas Cowboys owner Jerry Jones, and aggrieved running back Ezekiel Elliott, about their ongoing contract dispute.

The NFL regular season kicks off two weeks from Thursday, but Eagles fans are already in mid-season form when it comes to trash talk. On Wednesday, reports started surfacing of billboards in the Philadelphia area aimed at teasing their favorite targets: Dallas Cowboys fans.

The billboards are designed to troll Cowboys fans about the ongoing Ezekiel Elliott holdout situation. Elliott, one of the best running backs in the league, would like to be paid more money before the season begins. Cowboys owner Jerry Jones, the guy with the checkbook, seems less interested in the concept. On paper, it's a routine stalemate.

Then, last week, in a press scrum, Jones offered up a truly boneheaded remark when asked about Elliott after a preseason game.

"Zeke who?" Jones asked, jokingly. Elliott and his agent didn't enjoy the remark, according to ESPN, meaning there's now even more tension building between the two parties as the regular season draws close.

Meanwhile, Eagles fans are reveling in the dysfunction, so much so that some fans seemingly bought billboard space just to laugh at the Cowboys' misfortune, in at least two places in the Philly area:

While driving south on 95 I spotted this ad on a digital billboard. I'm not sure if you've seen this but, cheers to the #Cowboys
"Knock knock, whose there? Zeke, Zeke who?" Whomever sponsored it is a legend. pic.twitter.com/8FslxRw0j6

The exact locations of the taunting billboards aren't clear, though we're piecing together a quasi-map according to some who've seen the billboards in person:

There’s one on 322 headed to West Chester.

This is a pretty strong flex from Eagles fans, who are in a good mood ahead of this season. The Birds are expected to win the NFC East and contend deep into the playoffs, as long as Carson Wentz stays healthy. The Cowboys, meanwhile, don't pose much of a threat in the NFC East, or at all, while Elliott is away from the team.

Oh, and the Eagles won the Super Bowl in 2018. The Cowboys, meanwhile, have won three playoff games this during this millennium. That might also have something to do with it.