Gossip sites drew a tenuous connection between the two, but Pippen denied it all in an Instagram post 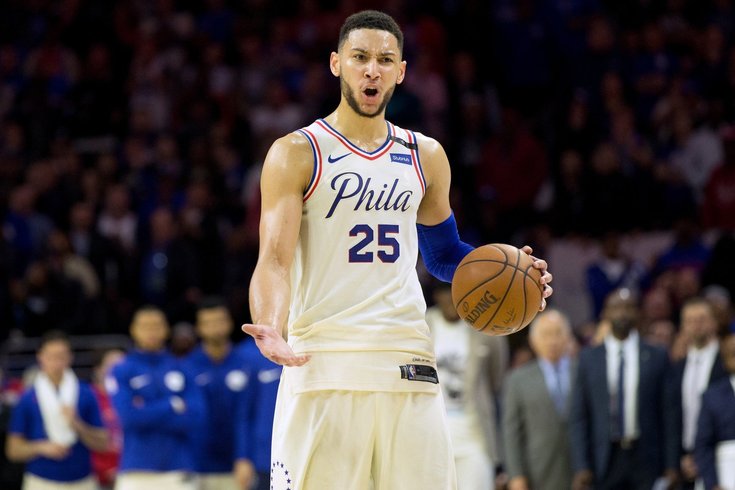 Ben Simmons, reacting to a foul call during the 2017-18 NBA season. Simmons was linked to Larsa Pippen, ex-wife of NBA legend Scottie Pippen, by gossip sites this week. The rumors appear to have been unfounded.

The two were reportedly spotted entering, and then leaving, a club called The Highlight Room in Hollywood on Monday night. There were no reports of the two actually being spotted together in the club; the closest anyone came to drawing a connection was that Simmons and Pippen happened to leave the club around the same time, though not together.

Watch Ben Simmons Allegedly Leave Dinner Date With Larsa Pippen Who Cheated on Scottie Twice With Future, But Made Pip Apologize to Her & Also Use to Be Kendall Jenner's Babysitter Who Cheated on Ben 6 Times (Pics-Vids) https://t.co/qv628jMlSn via @BasketballguruD pic.twitter.com/aoQ5cN7Vip

Instead, Pippen herself took to Instagram to shoot down the rumors, according to TMZ.

"I never even saw him, let alone left with him," Pippen wrote in an Instagram story. "He dated my BFFs sister, and I would never."

Pippen, 45, is close with both Kim and Kourtney Kardashian, according to TMZ, which would have made Pippen linking up with Simmons just months after he broke up with Kendall Jenner more than a little odd.

Simmons, 23, is weathering yet another interesting offseason. Just this month, Simmons shared his experience with feeling racially profiled at an Australian casino, and earlier this summer he received some backlash from angry Australians when he decided to forgo playing for Australia in the 2019 FIBA World Cup.

The Sixers kick off the regular season Oct. 23 against the Celtics.