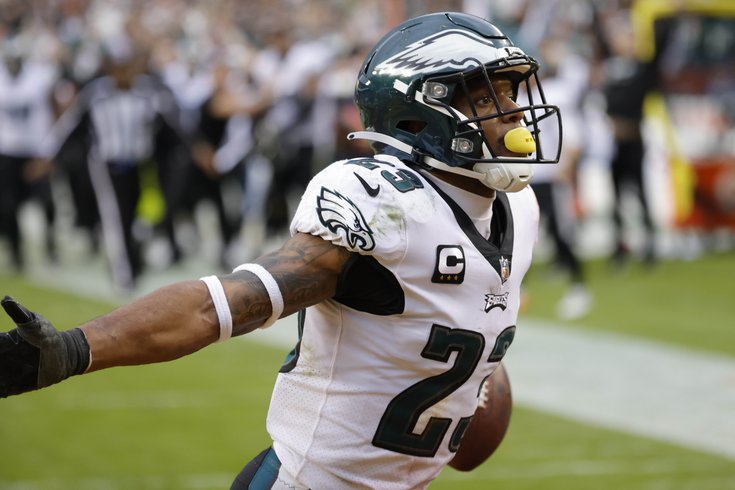 Rodney McLeod, the Philadelphia Eagles' safety who's working with the team on its new initiative to end gun violence in the city and the greater Philly region. The plan, which includes a new website and over $300,000 worth of grants, is a partnership with the city government and local community groups.

The Eagles are bringing out their defensive line against the huge wave of gun violence flooding Philadelphia through a new partnership with local community groups and the city government.

The multilayered initiative described in a Tuesday morning press release comes in the wake of Philly ending its most violent year on record, with 562 homicides. That surpasses the previous record of 500 set in 1990 and is a 13% increase compared to 2020.

In addition to the wave of violent crime gripping the city proper, in recent years, instances of violence have become more common at high school football games across the region.

A 7-year-old girl was shot and killed in August while Pennsbury High was playing Academy Park High in Sharon Hill and in September two teens were shot outside the Dunlap facility where West Philadelphia High was playing Central High.

Then in October, two shots rang out not far from the field where Cherry Hill West High School was playing Bridgeton High School. That came a few weeks before Camden High School's football team was disqualified from the playoffs for repeated instances of violence at their games this season.

In 2019, the Eagles hosted Camden High and Pleasantville High at their stadium for a game that was postponed after a 10-year-old was killed and two others were injured in a shooting that erupted during the third quarter of the game.

In the last six years Chester High School's football team has lost six players to gun violence according to its Coach Kaylin Johnson.

"It was hard going into the season and looking to your right and your left and those guys weren't there," Chester High's quarterback Isaiah Freeman said in the Eagles' press release.

The Eagles' safety Rodney McLeod understands the young quarterback's pain, as he spends a lot of time speaking with students at the region's high schools. He said shootings weigh heavily on the minds of many of the youngsters.

“It hurts to see so much heartache and suffering in our communities as a result of these senseless acts of violence," McLeod said. "No one should ever have to live in fear of going to school, hanging out at the playground or just walking out the front door."

He hopes the campaign will inspire community members to get involved and bring national attention to the issue of gun violence in the Philly area.

The Eagles' gun violence prevention program consists of two main components: $316,600 worth of grants for community groups working on gun violence and tangential issues and a new website called EndPhillyGunViolence.com, which was created in conjunction with the city.

The team will provide 32 community groups with grants of between $1,000 and $15,000 through the Eagles Social Justice Fund of the Philadelphia Foundation, which has given out $1.6 million to community groups since it was formed in 2018.

In total, groups addressing the issue of poverty are receiving $65,000 while organizations working on mentoring and education reform are getting $41,600 and $40,000 respectively.

The Social Justice Fund gets its money through donations from players which are matched by the team. It has an advisory board consisting of players and executives from the Eagles organization.

The new webpage, which is part of the Eagles' larger site, includes a map and list of resources available to city residents and will be complemented by an extensive social media and a series of public service announcements created by the team.

McLeod, a member of the Social Justice Fund's board who's been in Philly since 2016 when there were just 277 homicides in the city, said the campaign will not end when the season stops.

The exact causes behind the rise in gun violence, which is a trend nationwide, are unclear. The pandemic and the resulting economic crisis, a national reckoning over racial inequities in policing and a general sense of political turmoil are all possible factors.

Shootings in the City of Philadelphia have disproportionately impacted young Black men. Since 2015, Black men have accounted for about 75% of Philly's shooting victims, according to the statistics reported by the Philadelphia Center for Gun Violence Reporting, and 42% of the city's gun violence victims were younger than 24.

"We've talked about how Black Lives Matter," McLeod said. "We have to really live that out as a Black community and be there for our own people. It's frustrating when you see your race just deteriorating."