Get ready for Eagles-Saints with some hype videos, including Bryan Cranston giving a 'Breaking Bad' monologue 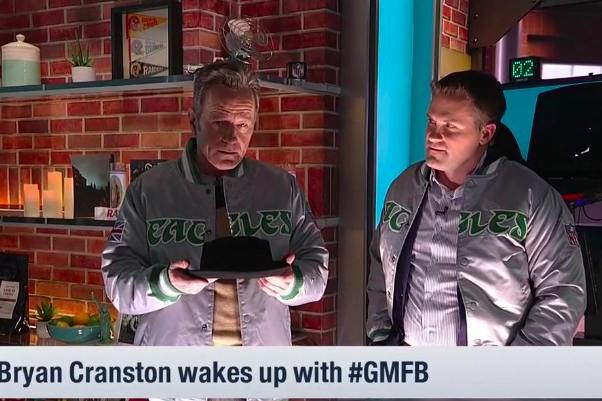 UPDATE: The Eagles, preparing for their divisional round matchup against the Saints on Sunday, released another video just over 24 hours before kickoff. Enjoy. You can see the previous video — plus a special message from Walter White to Nick Foles — below.

We're not crashing the party. We are the party.#PHIvsNO | #FlyEaglesFly pic.twitter.com/hZcDDXhVbg

The Philadelphia Eagles will get the rematch they crave this Sunday when they head back New Orleans to face the top-seeded Saints in the divisional round of the NFC playoffs.

After a 48-7 demolition in November, the odds are stacked against the red-hot Eagles—but not according to the most dangerous man in television.

In an appearance on the NFL Network's "Good Morning Football," Bryan Cranston donned an Eagles jacket and did his best Walter White to prove that in "Breaking Bad" terms, Nick Foles is his equal. The Eagles aren't the hunted. They're the hunters.

"Nick Foles is the one who knocks (teams out of the playoffs).”

Cranston is from California, so his support for the Eagles can only be attributed to the force that is Nick Foles.

As always, the Eagles released a hype video of their own for Sunday's game. While last week's video featured Malcolm Jenkins and harped on the team's doubters, this week's video is more of a social media roundup of everyone out there who can no longer deny Philadelphia's magic.

Nick Foles and Drew Brees, both graduates of West Lake High School in Texas, will meet again in the playoffs for the second time on Sunday. Darren Sproles and Malcolm Jenkins will face their old team. There are plenty of compelling plots in a game that figures to be one of the Eagles' most daunting matchups in years.

If Foles is the NFL's Walter White, New Orleans is in trouble.