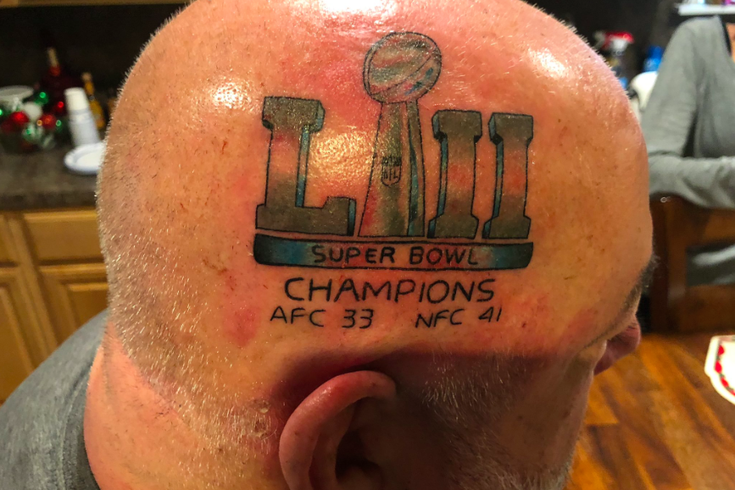 The bald Eagles fan best known in Philadelphia as "Tat Man" is hard at work covering virtually his entire body with team-related art.

He's now moved onto his head.

Chuck Soloman, who has more than 100 tattoos dedicated to the Eagles, recently got the Lombardi Trophy and Super Bowl LII logos completed on both sides of his head. It's just the beginning, according to Soloman.

Featured this week in Inked Mag, Tat Man's body has become a testament to Eagles history over the years. Some of it is fairly obscure and almost certainly was done on pure impulse. In addition to a Kevin Kolb tattoo, the 48-year-old business owner has tributes to Mike Quick and Eagles team reporter Chris McPherson.

Dedicated to one of the nicest guys and a true friend. Chris McPherson of the Eagles# fly eagles fly # NFL # eagles pic.twitter.com/Ss2keovMx6

His stomach features the implosion of Veterans Stadium and at least a half dozen player signatures that were made permanent overtop the autographs.

Getting the green flames put on pic.twitter.com/6cg80iTiYF

It's anyone's guess what the rest of the head tattoo will feature, but considering the quality of some of his other tattoos, we can probably expect it will turn out well.

The hottest lady from back in the day Marilyn Monroe in eagles green. What do you think pic.twitter.com/J88Qneg4sy

Who wants ink? Any eagles players out there want the hook up let me know. The shop do free work on you. pic.twitter.com/uUgOgd6MDO