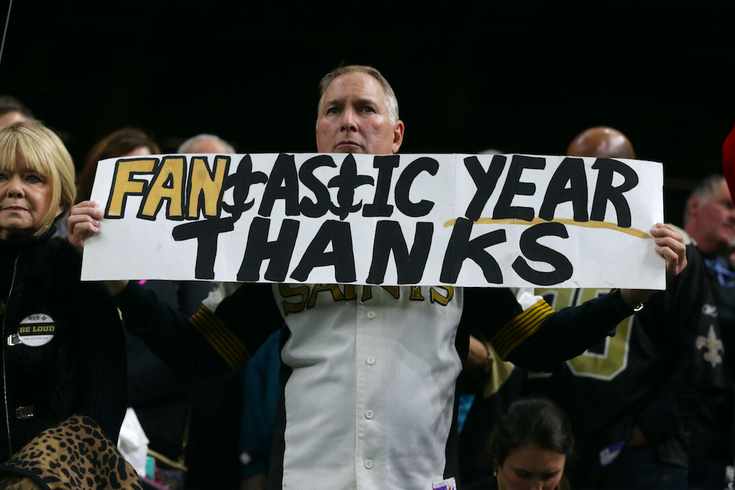 New Orleans Saints fan Larry Rolling of Covington, La., reacts after a loss in overtime to the Los Angeles Rams in the NFC Championship game at Mercedes-Benz Superdome on Jan. 20, 2019.

In other explosive Eagles news, veteran defensive end Chris Long was stunned by the reaction of a New Orleans Saints fan who destroyed his TV after Sunday's NFC Championship loss to the L.A. Rams.

Sports can drive people crazy. For example, this New Jersey man will spend the rest of his life in prison because he lost a $700 Super Bowl bet to his friend in 2013 — and killed him over it. The legalization of sports betting may have some unintended consequences of its own.

Much of Monday's NFL conversation, apart from Carson Wentz in these parts, has centered on the referees' no-call of defensive pass interference and a blatant shot to the helmet late in the Rams-Saints game.

Either call would likely have sealed a victory and sent the Saints to the Super Bowl. Rams cornerback Nickel Roby-Coleman later admitted he committed the penalty out of desperation.

Can you imagine if that had happened to the Eagles?

Something far worse than this might have wound up online. (Be sure to turn on your sound for this, and be warned that the video contains offensive language).

Everyone gets 1 TV in their life pic.twitter.com/ZIGt87biRT

What can you even say about that? Such pain, such anger, such an emphatic rage quit on the Saints and that poor, poor TV.

But leave it to Chris Long to find the beauty in this video.

Get the geek squad up in there and it’ll be up and running in no time. https://t.co/0DK4fpPWGw

I’ve watched this video 63 times and the sounds are remarkable. How this tv broke into so many different pieces, disintegrating in brilliant sequence. It’s artistic.

And the fact that he clarified his action afterward “shit pissed me off man.” I see.

Maybe this is a good time to reflect on the fact that football is a game. There's nothing at all wrong with it being a hugely important part of life in a home or community — quite the opposite — but being a fan should always stop short of carnage. If you find yourself punching a TV or burning hundreds of dollars of team merchandise over loosely connected politics, you're doing it wrong.