Four Flyers games postponed this week due to COVID-19 issues 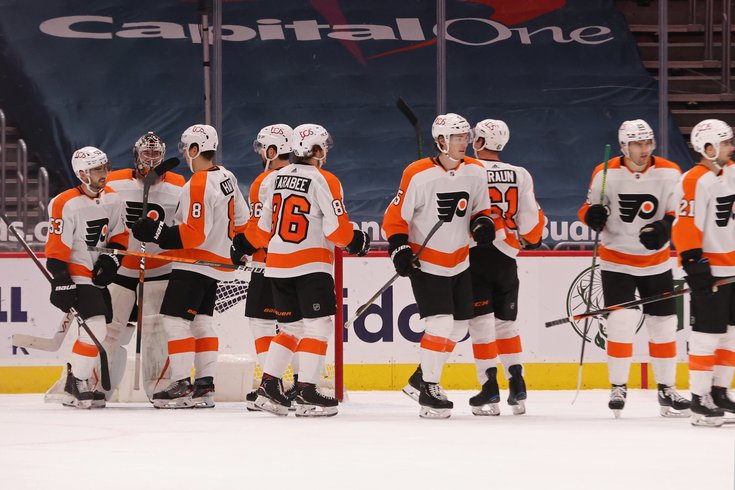 At least two Flyers players have been added to the NHL's COVID-19 protocol, the league announced Tuesday.

UPDATE: Make it four games that have been called off due to COVID-19 issues. The Flyers' scheduled matchup against the Rangers in New York City on Sunday has been postponed, the NHL announced. The league is hopeful that the team can begin reopening its facilities for practice on Monday.

UPDATE [5:10 p.m.] — We now have a better idea as to why the Flyers game against the Capitals on Tuesday has been postponed — and why it's a pretty fortunate thing that their games later this week against the Devils had already been postponed.

The Flyers have added a pair of players to the league's COVID list in captain Claud Giroux and defenseman Justin Braun. They join Travis Sanheim, who was previously placed on the list.

The COVID-19 pandemic has officially impacted the Flyers, as three games this week have been called off in accordance with the NHL's health and safety guidelines.

Tuesday night's matchup against the Washington Capitals has been postponed after a second Flyers player entered the league's COVID-19 protocol, the NHL announced. A rescheduled date for the game has not been determined yet.

The decision was made "out of an abundance of caution while the League continues to analyze test results in the coming days," the NHL said in a statement.

It's unknown at this point who the second Flyers player is to be placed in the NHL's COVID-19 protocol. Defenseman Travis Sanheim was added to the list on Sunday ahead of the Flyers 7-4 win over the Capitals.

The game went on as scheduled after all other Flyers players, coaches and staff tested negative for COVID-19, the NHL said.

The @NHL has issued the following statement regarding the @NHLFlyers.https://t.co/L9uSxijv1x pic.twitter.com/QuPlwbK4E7

Before Tuesday's postponement, no other Flyers players had been added to the league's COVID-19 protocol.

But the Flyers will now not play until at least Sunday, when the team is scheduled to travel to Madison Square Garden to face the New York Rangers.

MORE SPORTS: What they're saying: Pros/cons of trading Wentz, his preferred destination and who's to blame

The week-long layoff for the Flyers has come about as a result of COVID-19 issues facing the New Jersey Devils.

The Flyers and Devils were scheduled to face off at the Wells Fargo Center on Thursday and Saturday. But the NHL has postponed both contests in accordance with the league's COVID-19 health and safety protocols.

The Devils have not played since Jan. 31 and have since had five games postponed due to COVID-19 issues.

The Flyers at some point will need to make up these three contests during the shortened 56-game campaign. Given that the Flyers are only playing against East Division rivals during the 2021 season, rescheduling those games becomes even more important.

But it's also very likely, given the nature of the public health crisis, that the Flyers will have more games postponed this season. What we've already seen in the NBA, NFL, MLB, college football and college basketball is now happening in the NHL; games being postponed, players having to sit out, and teams having to pause activities.

The biggest question facing the Flyers now is whether or not more players are added to the league's COVID-19 protocol in the coming days.

A player being added to the NHL's COVID-19 protocol doesn't necessarily mean that he has tested positive for the coronavirus. But at the very least, it likely means that he has had some exposure to COVID-19. And if two Flyers players have already been added to the list because of a positive test result or exposure to COVID-19, there's a good chance that others could be as well later this week.