What they're saying: Pros/cons of trading Wentz, his preferred destination and who's to blame 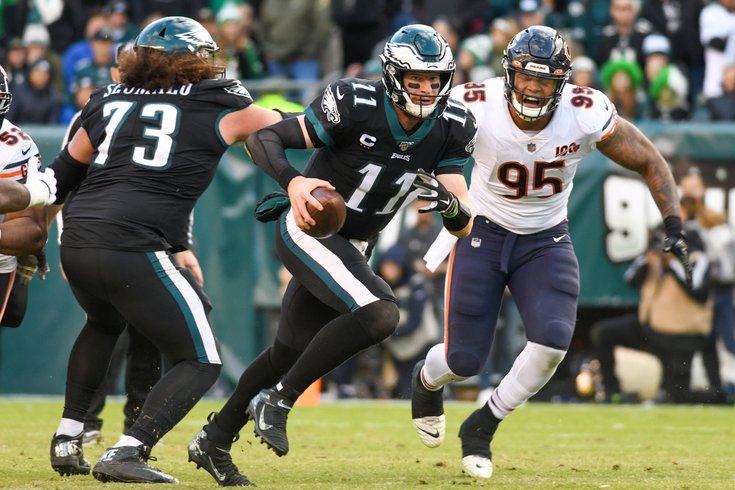 Carson Wentz runs the ball during an Eagles game against the Chicago Bears.

Normally, we try to mix up our Eagles coverage to focus on vary aspects of the team, especially in an offseason such as this when there's expected to be considerable changes up and down the roster. But this year, there's a single storyline that's been dominating the coverage of Philadelphia's football team, filling the space with so many rumors and so much speculation that there hasn't been time for anything else.

So, with that in mind, we decided to shift our focus away from Carson We—

Just kidding. Of course this entire edition of What They're Saying is going to be covering the latest on Wentz, his future, and how we got to this point. For more on that third topic, you can check out our detailed story from Monday that outlined some of the issues that led to the impending trade that will send the 28-year-old QB elsewhere.

With a Wentz trade possible at any moment, let's not waste any more time and dive right into our latest look at what they're saying...

Take the good with the bad

Over at BGN, Brandon Gowton listed all the pros and cons when it comes to trading Wentz, and unsurprisingly, the biggest of each category largely depend on the QB himself, and whether or not he's actually fixable. If he goes somewhere else and thrives, the Eagles will be left with some egg on their faces. But the same could be said about the flip side, if the team decides to keep him and fix him in-house, only to fail.

There really are no easy answers here, but it seems pretty clear that there's a much greater chance of Wentz fixing himself elsewhere and that a fresh start would be best for both parties.

• Wentz just might not be very good now. He’s 17-21-1 as a starter since tearing his ACL. He doesn’t appear to be the same athlete after multiple injuries (knee, back, concussion). He was arguably the worst full-time starting quarterback in the NFL last season.

• It’s hard to have supreme confidence in Wentz being “fixed” when there’s a lot of evidence to suggest he’s not a very coachable player. It doesn’t seem like he was humbled by his benching; he reportedly complained to Jeffrey Lurie and Howie Roseman after it happened. There’s a lack of self-awareness here. [...]

• Wentz could go on to thrive elsewhere. Maybe he rounds back to form under a new coaching staff. Maybe his new general manager finds a way to put elite talent around him, unlike in Philly. Maybe the new organization doesn’t coddle him as much and adequately holds him accountable.  [bleedinggreenation.com]

NBC Sports Philadelphia's Dave Zangaro offered up some thoughts on the pending Wentz trade. While he doesn't absolve the Eagles for their role in this mess — and it's a big mess — he believes that the QB deserves a fair share of the blame as well.

2. The Eagles royally screwed up this whole situation but let’s not absolve Wentz of blame either. He’s not innocent in all this. His Type-A personality and reported lack of accountability and unwillingness to be coached didn’t help matters. Did the Eagles create a culture that allowed those negative aspects of Wentz to thrive? Yeah, probably. But Wentz is a grownup too and he has even admitted at times that he needed to work on the relationship-building part of his personality. And he certainly could have handled things better when the Eagles drafted Jalen Hurts. Sure, the Eagles could have taken a player to help him and their decision to draft Hurts will always be a head-scratcher to me. But you just wish you would have seen more competitiveness out of Wentz. Despite all that went wrong in 2020, Wentz possesses the talent to overcome a lot and we never saw it.

With that said, I don’t think it will surprise anyone to see Wentz go elsewhere and thrive, especially if he’s put in a good situation. ... There’s a reason they were hesitating to try to trade him. If the relationship part of this could have been worked out, they know there’s still a talented player in there.

While it’s obvious now that the Eagles didn’t hire Nick Sirianni with just Wentz in mind, part of me wonders if they were still hoping things could be worked out with Wentz in Philly. Did they prefer that but felt like they ended up with no choice?  [nbcsports.com]

And Wentz also didn't do himself any favors with his on-field play either. In case you've forgotten just how bad it was last season for Wentz, here's a look at a minute's worth of plays that no fifth-year QB should be making.

i truly was on the fence about trading wentz, and then a friend sent me this video. pic.twitter.com/AHgmWUPVsb

MORE: None of this Wentz-Eagles drama makes any sense

The cult of Carson

If Zangaro was critical of Wentz, I'm not sure what adjective would describe the Inquirer.com's Marcus Hayes, who can't believe that Wentz still has defenders and went scorched earth on the Eagles quarterback.

"Wentz played awfully, blamed everyone but himself, then crippled the franchise on his way out of town," wrote Hayes, who went on to say of those who are unable to point a finger at Wentz, "Cults cannot condemn their leaders."

Marcus also says that once he's gone, he'll be among the biggest villains to have ever played in Philly, comparing him to famous fan enemies J.D. Drew and Scott Rolen.

Those claims are sad. Roseman, Pederson, and Lurie, at every turn, didn’t just bend over backward to accommodate Carson Wentz, they bent over forward, and sideways, too. They began these contortions even before Wentz arrived.

How has Wentz repaid them? With treachery. With petulance. With a fractured locker room, a shattered balance sheet, and no viable replacement.

He abandoned a group of teammates who defended and supported him through three consecutive seasons, in which his character was assailed by other teammates. Come to find out those assailants were right.

Carson Wentz is anti-Philadelphia in every possible way: soft, selfish, and stealing money.

He betrayed this franchise and this city like no athlete before him. Neither Drew nor Rolen left this sort of wreckage in their wake, but when their teams visited Philadelphia they were pilloried with boos and, in Drew’s case, was the target of thrown batteries — unthinkably boorish behavior, inexcusable and inappropriate.

Right now, the two teams being most linked to Carson Wentz are the Bears and the Colts, but Chris Simms told Mike Florio of Pro Football Talk that he's been hearing that Wentz would prefer a trade to the latter, where he would be reunited with Frank Reich and Press Taylor.

"FLORIO: For Wentz especially, he shouldn't want to go to Chicago because it's kind of like Philly.

"If I'm Wentz, I strongly prefer the Colts over the Chicago Bears.

"SIMMS: And I was told he does. I was told by some people I trust that he prefers the Colts' situation, certainly."  [via nbcsports.com]

MORE: McMullen: An impressive trade return for Carson Wentz shouldn't get the Eagles off the hook

History, like there was with Rivers and coach Frank Reich, is there between Wentz and Reich.

Reich spent two seasons (2016 and '17) as the offensive coordinator in Philadelphia with Wentz as quarterback. Wentz was having an MVP-caliber season in 2017 before suffering a season-ending knee injury in December that kept him off the field during the Eagles' Super Bowl run. And to add to the history, Colts receivers coach Mike Groh was Wentz's offensive coordinator in 2018 and '19, after Reich left the Eagles to coach the Colts.

If there’s one thing Reich believes he can do, it’s work with any quarterback. He’s the same person who didn’t even ask about Andrew Luck’s health status during his interview for the job in 2018 after Luck missed the entire previous season. Reich helped Rivers rebound from a 23-turnover season in 2019 to playing a significant part in the Colts making the playoffs in 2020 while committing nine fewer turnovers and having the third-highest completion percentage of his 17-year NFL career.

Reich couldn’t make Jacoby Brissett into a starter on a playoff team. But hey, everybody swings and misses at times.  [espn.com]

The biggest con? His head. And not in the way you might think — you know, his ability to accept coaching and take accountability and the concerns over his leadership and locker room personality. Instead, he's talking about his mental toughness in coming back from being benched for Hurts. If he can't bounce back from that, is there even a chance he comes back at all?

Where is Wentz at mentally?

Wentz just finished the worst season of his NFL career. He had 16 touchdown passes to go with 15 interceptions and the 50 times he was sacked. And to top off his disastrous season, the one-time franchise quarterback in Philadelphia was benched in favor of Hurts, who was selected in the second round of the 2020 draft.

That would bruise anybody's ego.

Reich got his wish in getting Rivers last season. If he really wants Wentz, it wouldn't be surprising if he got him, too, as the Colts try to build off the 2020 season and take advantage of the best years for building blocks like the aforementioned Leonard, Nelson and Kelly.  [espn.com]

So, let's say the Colts decide they want to acquire Wentz...

They're going to have to figure out the price, and based on how Zak Keefer and Stephen Holder lay it out, there's at least a chance that Ballard "won't get in a bidding war" and "his usual approach is to draw a line in the sand and hold firm."

Holder reported on Monday that Roseman's initial asking price was two firsts and an additional pick, similar to what the Lions received for Matthew Stafford. That's likely too high, and may not have sat well with Ballard.

If there’s one thing Colts general manager Chris Ballard has said again and again since he took over in 2017, it’s that he will not act out of desperation. Teams prey on desperation. Ballard’s thinking, on this front and others: He will not make a move just to make a move. He won’t get in a bidding war.

Veteran NFL reporter Greg Bedard noted over the weekend that the Eagles’ steep asking price initially led to some dial tones on the other end — it wouldn’t be a surprise if one of those dial tones came from Ballard.

Ballard’s usual approach is to draw a line in the sand and hold firm. It’s prevented the Colts from overpaying for free agents in recent years, and it’s one of the reasons they’ll enter this offseason with the third-most salary cap space in the league. It’s hard to find a bad contract on the entire roster.

But when it comes to the Colts and the quarterback position, the hole is glaring, the need obvious. Eventually, Ballard is going to have to act.  [theathletic.com]

Will a deal get done this week? Will one get done at all? Stay tuned...

MORE RUMORS: Could a mystery team outbid Colts, Bears for Eagles QB Carson Wentz? | Colts are 'definitely in on Wentz' but Roseman's asking price is high