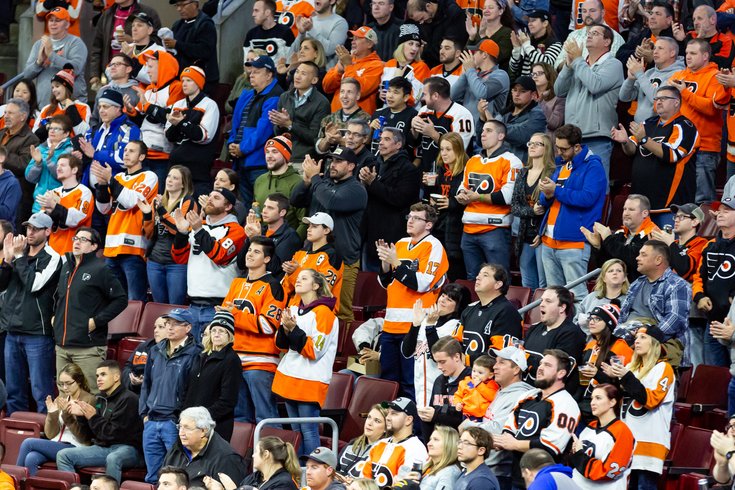 Fans of the Philadelphia Flyers during a game against the Arizona Coyotes at the Wells Fargo Center in South Philadelphia.

Hockey has always been considered a tough and grueling sport, but adding the outdoor elements into the mix could make life difficult for the Flyers and Penguins on Saturday.

Forecasts from the National Weather Service and Accuweather both call for a high chance of rain throughout the evening game at Lincoln Financial Field.

Crews were busy preparing the Linc's playing surface with ice this week in preparation for the annual NHL Stadium Series game.

There is currently a 90 percent chance of precipitation on Saturday evening, meaning the ice could soften and cause problems for both teams. Winds, although mild at 4-8 mph, could also play a factor that isn't typically part of hockey games. Temperatures are expected to be in the low to mid-thirties when the teams face off at 8 p.m.

For the Flyers, this will be their fourth outdoor game, and the fifth for the Penguins.

The 2011 Winter Classic in Pittsburgh was moved from 1 p.m. to 8 p.m. due to rainy conditions, while the Flyers 2012 matchup with the New York Rangers at Citizens Bank Park was pushed back from 1 p.m to 3 p.m. as a result of sun glare.

There's been no indication yet that the NHL will move Saturday's game, but fans planning to attend should be advised that they'll likely been for a cold, wet night.