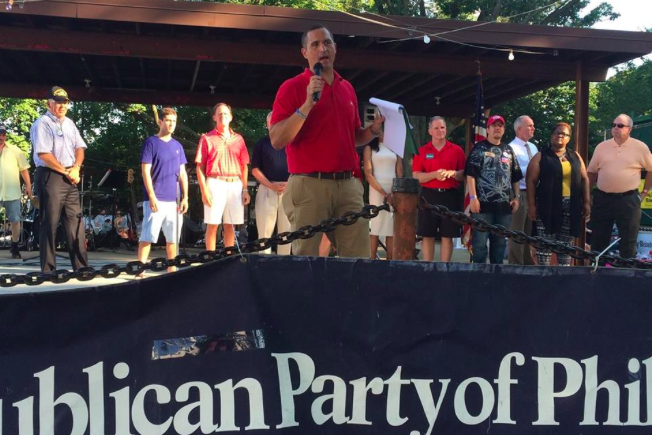 One week after a general election that seated the Republican Party in firm control of both the executive and legislative branches of federal government, Philadelphia's Republicans have issued a response to the wave of hate speech and hate crimes that have left many residents on edge.

On Monday night, at the closing reception of the International Unity Cup, Philadelphia Mayor Jim Kenney delivered an address that called for respect among neighbors and reiterated that hateful acts aren't welcome in Philadelphia.

During the course of the past week, many in Philadelphia and around the country have urged the nation's Republican leaders to denounce the hostile behavior of perpetrators who appear to identify with some of the platform and rhetoric spread by President-elect Donald Trump throughout the 2016 campaign season.

On Monday, Philadelphia Republican Party Chairman Joe DeFelice questioned the "media narrative" of guilt by association pinned on Republicans and conservatives, asserting that Trump should be seen as an antidote to undercurrents of extremism on both ends of the political spectrum.

Below is the full transcript of the Philadelphia GOP statement.

We have heard worries about an uptick in hateful activity after this extremely divisive election. Any violence towards somebody because of who they are or who they are perceived to be is wrong, and we condemn it. We must remain vigilant.

In our city Republican party we have Ward Leaders who are members of the African American, Latino, Asian, Muslim, Jewish and LGBT communities. Our supporters and voters are diverse and come from every ward in the city. Our party is made up of these people – so how could we, on the whole, stand for racism or oppression of any kind? Moreover, let’s remember this: despite the media narrative that Trump’s campaign was entirely racist, he improved his vote counts among Latino, Black and Asian-American voters. Perhaps something is wrong with the media narrative that lumps all dissent from 'progressive' values in with the most virulent racists. Maybe it’s the same reason why nobody in the media accurately predicted a Trump win – because they’re more focused on narratives than on reality. If we can learn one thing from this election it’s that people with well-thought-out, unprejudiced political views are tired of being branded as oppressors by progressives with no empathy and a penchant for hyperbole.

People voted for Trump because they have been left out during the Obama years. They admire his willingness to address tough issues that affect our country, such as illegal immigration, which have previously been branded ‘off limits’. They see America’s place in the world shrinking and heard a candidate of the left who promised more of the same. They hear intense derision and condescension from the mainstream media and the progressive elite. They were appalled by the lack of transparency and corruption of the Clintons. Are some people that voted for Donald Trump racist? Undoubtedly. Do some people that voted for Hillary (or Bernie in the primary) spit on the flag and justify violence against police officers as a political tool, as examples? Also, undoubtedly. The media needs to be careful that they’re holding everybody accountable, and not just conservatives, for extremism that exists at the fringe of every political movement.

The Philadelphia Republican Party opposes the one-party rule that has held back our city for decades, and is dedicated to building a more diverse and inclusive party. Contrary to the media narratives we’ve heard, we believe our President-Elect will actually be helpful in that regard.