More should go to immediate intervention methods due to the city's surge in shootings, Controller Rebecca Rhynhart says 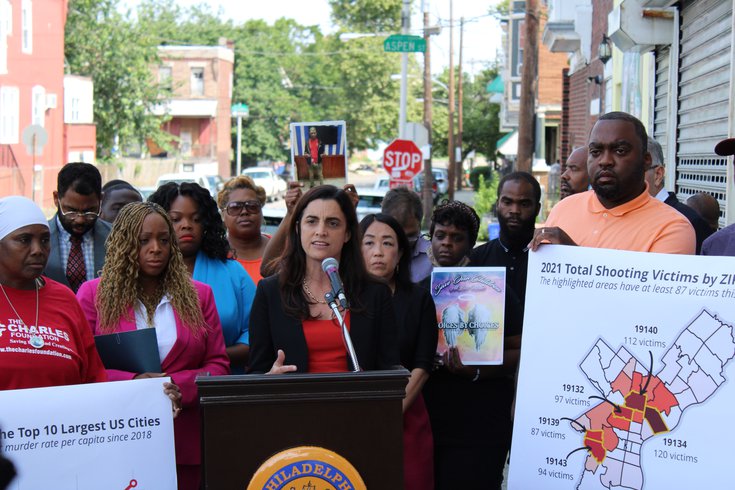 A report by City Controller Rebecca Rhynhart says most of the $155 million allocated to anti-violence initiatives in Philadelphia's most recent budget 'supports programs that will likely take years to produce measurable reductions in gun violence.'

With Philadelphia on pace for a record number of homicides due to a surge in gun violence, city leaders allocated $155 million in the latest budget toward anti-violence initiatives. But only a small portion of that funding will actually go toward efforts to reduce shootings in the short term, according to a report released Thursday by City Controller Rebecca Rhynhart.

The city's anti-violence budget for the 2022 fiscal year breaks down into two pools: $68 million in new funding and $87 million allocated to existing efforts. After examining how the money was allocated, Rhynhart's office concluded that "most of the funding supports programs will likely take years to produce measurable reductions in gun violence."

"Moreover, some of the funding characterized as anti-violence by the Kenney administration is earmarked for other uses and is not specifically focused on the gun violence crisis," the report says.

Rhynhart's office referred to the National Institute for Criminal Justice Reform in classifying the initiatives funded in the city's budget and determined that only 21%, or $33 million, was directed toward "intervention" — efforts to interrupt gun violence happening right now by targeting people who are most likely to shoot or be shot.

A majority of the money allocated toward intervention efforts, $23.3 million, was from the $68 million in new funds. Of that $23.3 million, $20 million will be dispersed in grants to community-based organizations working in the neighborhoods most impacted by gun violence. The grants, which have not yet been awarded, must be used on projects taking place between this fall and next summer, but the report from Rhynhart's office notes that grant recipients may use the funding on long-term preventative efforts.

The city's FY22 budget also allocated $6.6 million for the expansion of its Group Violence Intervention initiative and the Community Crisis Intervention Program. In an emailed statement to PhillyVoice, a spokesperson for Mayor Jim Kenney's office called the evidence-based programs "highly impactful and cost effective initiatives because they target residents most at-risk to be victims or offenders of violent crimes."

"Framing it in such a way that only 21% of funding for short-term strategies isn’t sufficient doesn’t actually provide adequate context to the impact that these initiatives at the current funding levels can have on the immediate crisis," the spokesperson said.

Rhynhart's office, however, said it's difficult to gauge their effectiveness because the city has not released evaluations of the programs publicly. The report advocates for using the community grants to fund programs that can provide evidence-based intervention to neighborhoods where they aren't as prevalent now.

Criminal violence intervention "organizations use credible messengers, also known as violence interrupters, to work directly with the individuals most at risk from gun violence, intervene before violence occurs, and connect them to social and economic resources," the report says.

"... Philadelphia's investment in CVI programs and the associated support services is substantially lower than cities with similar, and more successful, approaches. If Philadelphia were to invest at the level of New York or Los Angeles, it would cost about $55M annually."

Applications for community grants are open until Sept. 3 on the Office of Criminal Justice and Public Safety's website. A group of city leaders will begin considering organizations for funding on a rolling basis beginning Friday.

A point of contention between Kenney's office and the report from Rhynhart's office is what to make of the $13.3 million in new funding allocated to improving the Philadelphia Police Department's coordination with behavioral health specialists when responding to 911 calls related to mental health crises. The funding was added to the budget, in part, to address issues stemming from the fatal shooting of Walter Wallace Jr. at the hands of Philly police officers last October.

"While classified as anti-violence spending by the Kenney administration, these initiatives, while important, are not aimed at combating the city's gun violence crisis. For this reason, the analysis separates these initiatives into their own category," the city controller's report says.

Kenney's office, however, called the police reform measures "a short-term anti-violence strategy and a significant portion of the city's overall budget."

About 70% of the anti-violence budget is funding programs Rhynhart's office classifies as prevention, defined as mitigating risk of gun violence in the medium term, and transformation — addressing root causes of gun violence and improving socioeconomic conditions in the communities most impacted over decades. Ranging from after-school programming for K-12 students to blight abatement and juvenile justice services, these initiatives offer long-term benefits to residents but "typically take years to achieve a measurable reduction in shootings," the report says.

Some of this long-term spending also includes restoring funds to city services that had their budgets cut last year due to the coronavirus pandemic — $7,138,399 to Parks and Recreation and $2,978,274 to the Free Library, for example. And although Rhynhart and City Council members have advocated for increased funding to these services that "play an important role in creating safe and thriving neighborhoods," her office concludes that they don't necessarily qualify as violence prevention methods.

"These are important initiatives with long-term benefits to residents, but national experts are clear that the most successful anti-violence efforts are targeted to the hotspot areas where violence is most concentrated and are focused on the relatively small group of people who are most likely to be involved in gun violence," the report says.

With input from City Council, Kenney's administration developed its own categories for allocating anti-violence funds in the budget: community empowerment, healing, prevention, employment and careers and and safe havens for youth and families. When City Council approved the budget in late June, Councilmember Kenyatta Johnson, who chairs the Special Committee on Gun Violence Prevention, called it "a paradigm shift in how we deal with violence."