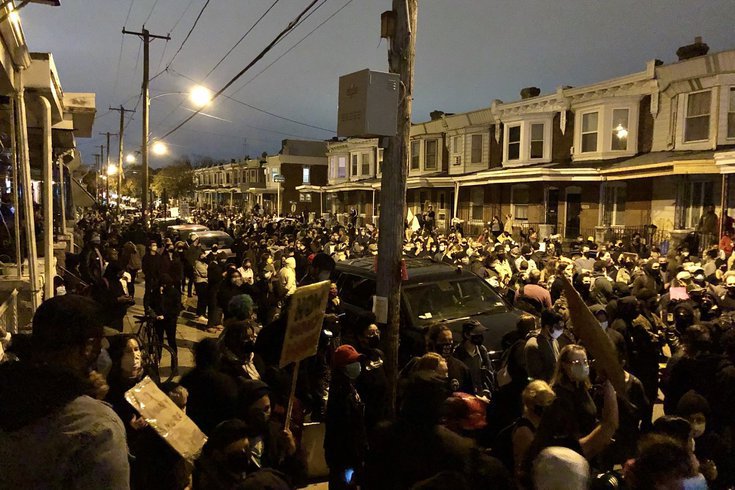 Walter Wallace Jr. was fatally shot by two Philadelphia police officers on Oct. 26, 2020. City officials have pledged a full investigation into the incident and on Wednesday released body camera footage and 911 audio from the case.

Philadelphia officials have released the body camera footage and 911 audio from the fatal police shooting of Walter Wallace Jr., whose death last week prompted civil unrest in the city and became a focal point of national conversation.

The two officers involved in the shooting also were identified for the first time Wednesday.

"We understand that the materials released today will be very painful," Kenney said. "It will elicit anger, rage, distress, evoke more questions, and rightfully so. The video footage contains graphic and violent images, and may be intense and traumatic for some to watch."

Wallace, a 27-year-old Black man, was shot on Oct. 26 by two police officers who responded to a disturbance on the 6100 block of Locust Street in West Philadelphia.

More than 11 minutes of footage and audio recordings were released by the city in a Dropbox file here, but the link later appeared to be broken. The body cam portion of the materials were later uploaded to YouTube by NBC10.

The contents of these recordings are extremely disturbing and difficult to absorb.  They paint a wrenching picture of the moments and interactions that transpired before and after Wallace was shot, as well as the grief of family members and neighbors who were present at the scene.

The audio recordings include several 911 calls from neighbors and family members. Transcripts from the 911 calls were not released.

In the hours after the Oct. 26 shooting, another video recorded by a civilian witness showed Wallace approaching two police officers with a knife in his hand.

The officers, who did not have Tasers, pointed their guns at Wallace and ordered him to drop his knife. When Wallace continued to advance toward the officers, they fired at least 14 gunshots and killed him.

The materials released Wednesday night show a more complete interaction and spatial relationship between the officers and Wallace in the moments before the decision was made to shoot him.

Outlaw identified the officers as 26-year-old Thomas Munz and 25-year-old Sean Matarazzo, both of the 18th District. Munz joined the department in 2017 and Mattarazo in 2018.

City officials said "Officer 1" in the videos is Munz and "Officer 2" is Matarazzo.

This is the first time the Philadelphia Police Department has made body camera footage public in a fatal police shooting.

Kenney said the video has been released to ensure transparency as investigations continue, and to hold city institutions accountable.

"We know this moment is incredibly painful given so many failures over generations to protect all of Philadelphia's residents, especially those who are Black or Brown," Kenney said.

The determination of how much video to release was made in full consultation with the Wallace family, who wanted the public to see everything from the arrival of the police officers at the scene to the moments before he was transported to Penn Presbyterian Hospital.

"The Philadelphia Police Department and the District Attorney’s Office consulted with the family and are acting in accordance with the family’s wishes," the city said in a statement.

Wallace's family said he was experiencing a mental health crisis at the time of the shooting. They have said police arrived at the scene the day Wallace was shot after a family member called 911 to request an ambulance, not law enforcement intervention. Wallace suffered from bipolar disorder and had been taking the mood stabilizer lithium.

In the aftermath of Wallace's death, peaceful demonstrations over the shooting devolved into riots and looting in several Philadelphia neighborhoods. Those incidents have resulted in more than 200 arrests and injuries to 57 police officers during confrontations with protesters.

The shooting became a flashpoint in the 2020 presidential election, provoking debate between Donald Trump and Joe Biden in the final days before Election Day.

On Wednesday, Outlaw described a comprehensive plan for the police department to fully implement its behavioral health crisis co-responder unit, which will be embedded within police dispatch centers. The program had been announced in October, just weeks before Wallace was killed.

Beginning next week, police dispatchers will receive crisis intervention training for the program. The police department also is developing a decision tree for dispatchers to follow during calls with residents, asking questions that help in determining the appropriate response. The unit is expected to be fully operational by 2021.

Bowen, elaborating on the program, said the collaboration will empower dispatchers and officers to work together efficiently in responding to urgent behavioral health crises. A pilot will get underway across the East Division by the end of this month.

Outlaw and Krasner have pledged full and fair investigations into the shooting of Wallace. Key facts of the case still have not been disclosed to the public, including the department's history of interactions with Wallace, but officials last week had promised to release the body camera footage and 911 audio recordings by the end of this week.

Krasner's office will investigate whether criminal charges should be brought against the officers, a process that may require a grand jury for further review of the case.

Philadelphia Fraternal Order of Police Lodge 5 President John McNesby released a statement late Wednesday supporting Munz and Matarazzo. He claimed the police union had been urging the release of the materials since the day after the shooting, and rebuked the city for its "false narrative" around the incident.

"City officials held an hour long press conference casting blame on these officers for this incident in which they were forced to make a split-second decision," McNesby said. "This is baseless and not supported by facts. These officers followed their training and police department policy. It’s completely inappropriate that these officers continue to be vilified for doing their job."

Clergy members urged Philadelphia residents not to respond to the videos with violence, and pleaded with communities across the city to refrain from chaos in the face of tragedy and injustice. They implored police to examine the department's policies on Tasers and assignments, questioning whether Wallace might still be alive if a senior officer had been dispatched to the scene.

Wallace's family has said they plan to seek justice, but they do not wish to see the officers charged with murder.

Wallace's funeral will be Saturday at the Church of Christian Compassion, 6121 Cedar Ave., in West Philly. The viewing will begin at 9 a.m. and will be followed by a ceremony at 11 a.m.