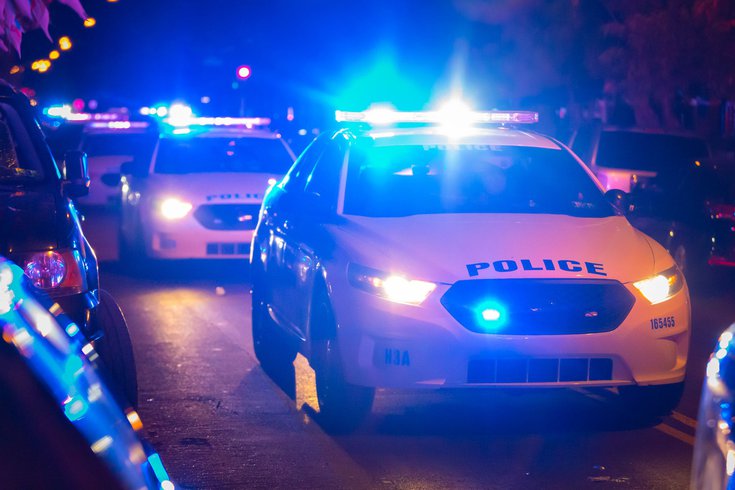 Philadelphia police could soon be prohibited from using less lethal munitions — such as tear gas, rubber bullets and pepper spray — when responding to demonstrations in the city. This photo shows a line of police vehicles on Pine Street in West Philly on Oct, 27, 2020, responding to demonstrations in the wake of the fatal shooting of Walter Wallace Jr. by police. There are no reports of police using less lethal munitions during the protests following Wallace's death.

Philadelphia could become the first city in the United States to ban the use of "less lethal" munitions by police when responding to demonstrations.

City Council passed a bill Thursday after several months of hearings and in the midst of new civil unrest after the police shooting of Walter Wallace Jr. in West Philadelphia. The legislation bans the use of tear gas, rubber bullets and pepper spray as a means of quelling protests in the city, which had already placed a moratorium on the use of tear gas.

Before the ban becomes an ordinance, it requires approval from Mayor Jim Kenney.

Council members began reviewing the matter in response to the protests that followed the police killing of George Floyd in Minneapolis in May. Police used less lethal munitions against protesters and bystanders in West Philadelphia on May 31, and again on June 1 during a protest that took place on Interstate 676.

"We chose a public process of listening, of truth telling, of accountability, driven by the voices and experiences of the people we serve," said Councilmember Helen Gym, who sponsored the bill. "In banning the police use of less lethal munitions in response to demonstrations, we are answering the calls of our constituents. This is a moment where repairing trust between our residents, public officials, and police is essential."

Philadelphia's overall response to the protests in May and June is still subject to an independent review.

Two lawsuits also have been filed against the city and the Philadelphia Police Department for their use of less lethal munitions in West Philadelphia and on I-676.

"Residential neighborhoods are not war zones," Gym continued. "Demonstrators are not enemy combatants. This is a first step in working with our communities to build a new model for public safety that is driven by their needs and their vision for the future."

City Council's Public Safety committee heard testimony from Lynda Garcia, director of the Policing Campaign at The Leadership Conference. Her coalition consists of more than 220 national organizations working to promote and protect civil and human rights.

"A new paradigm of public safety should not just change policing policies and practices," Garcia said. "Local leaders must engage and work with communities to develop solutions to social and public health challenges and to shrink the footprint of the criminal legal system — including police — in Black and Brown people's lives."

Chris Romano is a local business owner who was among those cornered by police on the hill beside I-676. He told council he experienced serious complications from tear gas and continues to deal with trauma from the incident.

"I was exposed to copious amounts of tear gas that resulted in uncontrollable vomiting," Romano said. "For days after, I experienced complications such as blurred vision, a swollen and sore abdomen. "At times, the sound of children playing brings back memories of the incessant screaming I heard on the hill that day. The smell of smoke from a nighttime backyard fire has resulted in flashbacks of the tear gas and pepper spray in the air that day."

University of Pennsylvania physician and health policy researcher Joseph Nwadiuko provided testimony to City Council on the dangers of rubber bullets, which he said cause severe injuries 91% of the time they strike the torso or head. Tear gas can burn the skin, elevate a person's blood pressure and cause eye damage that can lead to glaucoma and blindness.

Philadelphia police have made 212 arrests during the past three days amid the unrest following Wallace's death in West Philadelphia. Authorities reported 57 officers were injured and 18 police or fire department vehicles were damaged.

There have been no reports of police using tear gas, rubber bullets and pepper spray on protesters.

City officials said there will not be another curfew in place on Oct. 29, but residents are advised to remain home unless leaving for essential purposes.