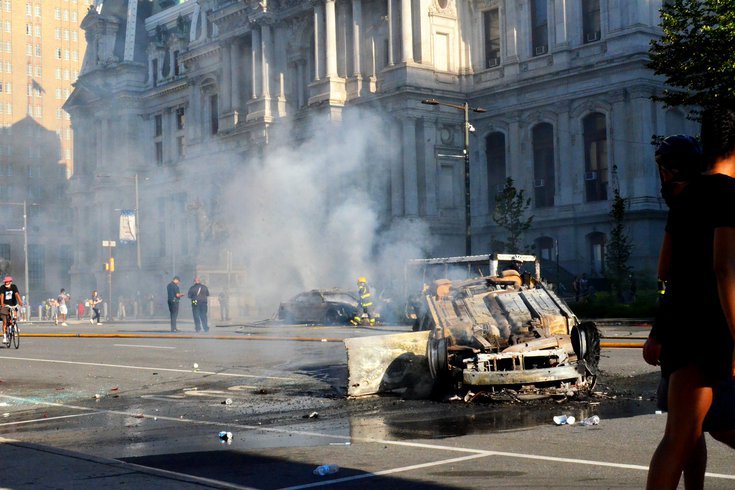 Federal arson charges charges were filed Thursday against four men allegedly involved in the burning of police vehicles in Philadelphia on May 30, 2020. What began as peaceful demonstrations for George Floyd became chaotic that afternoon, sparking a wave of civil unrest in the city. Above, a vehicle was flipped amid the demonstrations.

Four men are facing federal arson charges stemming from the civil unrest in Philadelphia last May following the police killing of George Floyd in Minneapolis.

The charges were in connection to two incidents on May 30, when peaceful protests devolved into riots in Center City.

A Philadelphia Police Department vehicle parked on the north side of City Hall, near Broad and Market Streets, was set ablaze when Matchett, Miller and Smith allegedly threw combustible materials inside the car. A road flare placed inside the car had already started a small fire.

At approximately the same time, two Pennsylvania State Police vehicles were parked near the on-ramp to I-676 at Broad and Vine streets to prevent protesters from gaining access to the freeway. After the vehicles' windows were smashed, state police equipment and riot gear were stolen.

Tabri allegedly threw a lit road flare into one of the vehicles, igniting a fire that engulfed the SUV.

"If you are a protester trying to communicate a legitimate message, engaging in mayhem obscures that message," McSwain said. "It also turns public opinion against you and, most significantly, it can land you in federal prison for a very long time."

McSwain noted that Smith is a prominent activist and teacher in West Philadelphia.

"To state the obvious, that is not why he is now in federal prison," McSwain said. "Mr. Smith was not in any way targeted by my office. I knew nothing about Mr. Smith or his affiliations until the investigation was nearly complete and the proposed charges had been written up by dedicated and capable, career federal prosecutors."

Smith was profiled by Philadelphia Magazine this month as an influential activist and organizer with the Philadelphia Coalition for Racial Economic and Legal Justice. He currently has a civil rights lawsuit against the city for its response to the protests earlier this year.

His lawyer, Paul Hetznecker, criticized the charges as a political effort, noting Smith was arrested shortly before Election Day and months after the alleged incident took place.

"Utilizing the awesome power of the federal government to target activists and select them for federal prosecution during one of the most important social justice movements in our history sends a dangerous message," Hetznecker told the Inquirer. "The prosecution of my client, Anthony Smith, a respected teacher and political activist, is part of a broader effort by this administration to criminalize and quell dissent expressed by progressive political movements."

The charges were announced in the midst of another round of civil unrest sparked by the police shooting of 27-year-old Walter Wallace Jr. in West Philadelphia. McSwain said the conclusion of the arson investigation was coincidental, but serves as a lesson to those who commit crimes.

"We are drawing a clear line between protest and illegal activity – and we support protests," McSwain said. "It's part of our job to protect it. I don't think, logically, it makes sense to say allegedly burning a police vehicle has anything to do with legitimate protest."

Multiple people were seen in the area of the Philadelphia Police vehicle burned near City Hall, making the investigation a difficult process of identification.

All four defendants are charged with two counts of arson and one count of obstructing law enforcement in the commission of their duties during a civil disorder.

If convicted, all four men face a mandatory minimum of seven years in federal prison and a maximum sentence of 65 years in prison, followed by three years of supervised release and a fine of up to $750,000.

Matchett previously was facing charges for his alleged role in inciting riots in Atlantic City after Floyd's death.

"There is no right to riot, loot, rob, commit arson or destroy," McSwain said. "If you engage in violent civil unrest, and you commit a federal crime in this district, we will come after you as hard as we can. You will go to jail. It is not worth it."

In June, prosecutors announced similar arson charges against 33-year-old Lore-Elizabeth Blumenthal, who allegedly was involved in the arson of a Philadelphia Police sedan and SUV. The vehicles also were parked on the north side of City Hall on May 30.

McSwain said his office does not discriminate when bringing charges in these cases.

"We do not investigate people at the U.S. Attorney's Office. We investigate alleged criminal behaviors," McSwain said. "A defendant's race, ethnicity, gender, political affiliation or group membership make no difference to me or to anybody else in my office. In our investigations and prosecutions we only care about whether or not you committed a federal crime. And if you did, you will face the consequences."

The charges announced Thursday are unrelated to the civil unrest prompted by the shooting of Wallace, which remains under investigation.

Police Commissioner Danielle Outlaw said several department vehicles have been vandalized and damaged over the past few days, which have seen widespread looting and confrontations between protesters and riot police.

"The FBI remains committed to protecting the rights of individuals to peacefully exercise their First Amendment freedoms," said Philadelphia Division Special Agent in Charge Michael J. Driscoll. "Violence and destruction of property jeopardize the rights and safety of all citizens, including peaceful demonstrators. Today’s indictments send the message that if you seek to hijack peaceful protests to pursue violent and extremist agendas, the FBI and its law enforcement partners will bring you to justice."