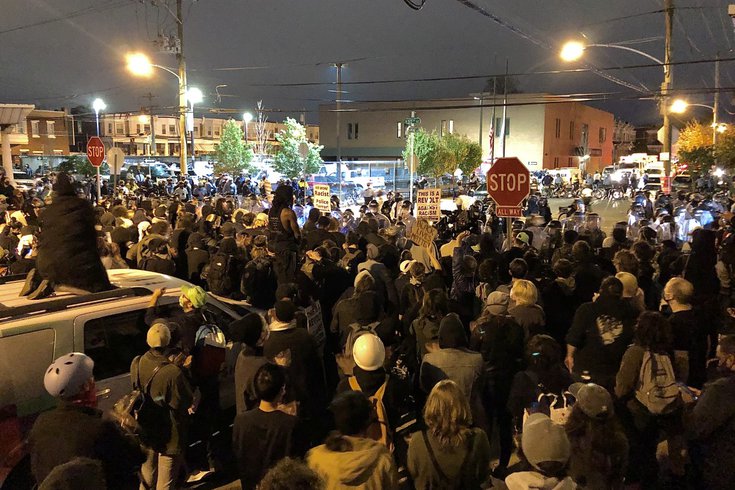 Demonstrators march in West Philly on Tuesday, one night after Walter Wallace Jr. was shot and killed by police in Cobbs Creek. Above, protesters come face to face with officers at 55th and Pine streets, near the 18th District police headquarters.

On Wednesday afternoon, Philadelphia Police Commissioner Danielle Outlaw said the city will release the recordings once Wallace's family and attorney have had the opportunity to review the evidence.

The city was under a 9 p.m. curfew Wednesday following two nights of protests and looting sparked by the shooting of Wallace in West Philadelphia.

The curfew was lifted at 6 a.m. Thursday, as details began to emerge of a van filled with explosives found by police in the area of Logan Circle on the Benjamin Franklin Parkway. It's unclear at this time whether the van has links to the ongoing civil unrest.

On Tuesday night, rioters ransacked businesses in the Port Richmond section of the city. In West Philadelphia, peaceful protests became contentious as demonstrators threw rocks and debris at officers in riot gear. Police said bricks — and what appeared to be blood — were among the projectiles thrown at officers.

Hundreds have gathered peacefully to speak out against social injustice. But their voices are being drowned out by others taking advantage of this time to sow mayhem.

I signed this proclamation so commonwealth resources can be provided quickly to protect lives and property. https://t.co/6nn7scX5ZC

Wolf has called in the National Guard to support the city's efforts to maintain peaceful demonstrations and to defend city businesses against looting.

A total of 81 arrests were made Tuesday night into Wednesday, including 53 for commercial burglaries and eight for assaults on police officers, officials said.

One person was arrested for arson, another for aggravated assault, four for robberies and several others for disorderly conduct, code violation notices, criminal trespass and vandalism.

At least 297 looting incidents were reported on Tuesday night into Wednesday morning, a large number of them in the area of Castor and Allegheny avenues, where about 1,000 rioters gathered.

Philadelphia Police Commissioner Danielle Outlaw condemned the lawlessness in a press briefing on Wednesday, noting that the criminal activity in Port Richmond served no purpose related to the incident in question.

Wallace, a 27-year-old Black man, was shot by two police officers who responded to a disturbance Monday on the 6100 block of Locust Street. His family said he was experiencing a mental health crisis and claimed their 911 call was for an ambulance, not police intervention.

Wallace was seen on video approaching two officers with a knife in his hand. The officers, who did not have Tasers, pointed their guns at Wallace and ordered him to drop his knife. When Wallace continued to advance toward the officers, they fired at least 14 gunshots, causing fatal injuries.

Outlaw and District Attorney Larry Krasner have offered assurances of a full investigation into the circumstances surrounding the use of deadly force. Few details of the case have been made public and the identities of the officers who shot Wallace have not been released.

On Wednesday afternoon, Outlaw said the city plans to release audio of the 911 call and body worn camera footage from the shooting in the near future. Police will give Wallace's family the opportunity to review the evidence before it is made public.

Police say looters have changed their strategies from the incidents seen during riots in May and June, following the police killing of George Floyd in Minneapolis. Their focus has shifted to big box stores in locations where meet-up locations and escape routes, such as bridges and highways, are most accessible.

Rioters also are communicating in private group texts to identify target locations, making it more difficult for police to anticipate which businesses will be hit before incidents occur.

"We have to adapt as we see them adapt," Outlaw said.

Investigations into commercial burglaries across the city will remain ongoing. The city will continue to assess reports of looting from businesses and will explore the feasibility of providing financial relief, as was done after the incidents in the spring.

Mayor Kenney said the city will assess the possibility of additional curfews on a day-to-day basis.