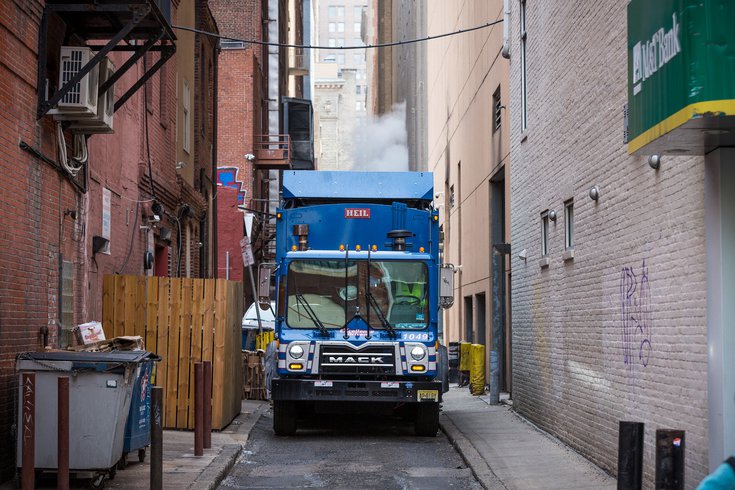 Councilmember Cherelle Parker introduced an ordinance on Thursday that would impose fines on each individual piece of debris illegally dumped on the street in order in order to 'crack down' on companies who are not properly disposing of trash.

Illegal dumping is a major issue in Philadelphia neighborhoods, and is becoming a major issue for City Council. The city has seen an increase in reports of illegal dumping since the onset of the pandemic, causing a nuisance for residents and, at some points, contaminating soil and groundwater.

As part of a larger effort by city lawmakers to crack down on illegal dumping and reduce neighborhood blight, Councilmember Cherelle Parker introduced an ordinance on Thursday that would increase enforcement of illegal dumping and impose heavier penalties for violations.

Current law allows the city to impose a fine of up to $2,000 for illegal dumping without the use of a vehicle, or up to $5,000 for dumping using a vehicle. Those maximum fines remain the same regardless of the size or capacity of the dump, which for some areas of Philadelphia can block entire city streets. Parker's legislation would treat each large piece of debris as its own violation and impose separate fines on each large piece of debris, rather than one single fine on the entire dump.

For example, City Council estimated that a dump of 20 tires on the street could garner up to $100,000 in fines, rather than one fine of just $5,000. Parker said that revising the standards for illegal dumping could improve enforcement of current laws against violations and crack down on companies who dump debris on the streets and create blight.

"We're cracking down on people and companies who do not properly dispose of their trash," said Parker. "Not only is dumping an irresponsible business practice, but it's also disrespectful to the community. The trash left behind is harmful, unsightly, and premeditated. This legislation makes every single item within a single dump subject to violation. Previously the whole dump was subject to one single violation."

Property owners would also be subject to a fine if they do not clear the debris from their property. Parker addressed quality-of-life issues in her five-point community policing initiative. The plan, which was released at the beginning of April, calls for improvements to the Philadelphia Police Department, including support for the addition of 300 bike and beat patrol officers.

In her plan, Parker points to the city's challenges in addressing mounting quality-of-life issues, particularly in the wake of the pandemic. Things like graffiti, blight, abandoned cars, potholes, and tractor trailers parked in residential neighborhoods have become the focus of community meetings and discussions among residents, in addition to the city's growing number of homicides.

"Many of these quality-of-life issues should be viewed as 'low-hanging fruit,' in the sense that addressing them goes a long way in affirming citizens' faith in government," Parker wrote in the plan. "But they also minimize criminal activity in the affected areas. By not effectively addressing these quality-of-life issues, people are increasingly perceiving their community as less safe. The perceptions compounds upon itself, and for many, perception has become reality."

Illegal dumping was also the subject of a City Council hearing on Thursday afternoon, organized by Councilmember Jamie Gauthier. Currently, Gauthier is leading a budget campaign urging city leaders to address these quality-of-life issues in the city budget and increase spending to do so.

The #JustServicesPHL campaign aims to use city funding within the budget to address issues like the city's 311 system, abandoned vehicles, dumping, and broken streetlights in need of repair. Each of these issues, Gauthier said, impacts the public safety of many communities throughout Philadelphia and creates blight, increasing levels of violent crime.

"Just joined 200 volunteers to pick up 8 tons of trash in Kensington. I hope thru #JustServicesPHL we can find ways to create an illegal dumping task force. If we had people cleaning & monitoring sites, it'd lighten the load on existing city staff & create jobs" - @YaFavTrashman pic.twitter.com/lDGJvlGd1o

In an analysis of 311 requests conducted by the City Controller's Office, Rebecca Rhynhart found that 59% of 311 calls about illegal dumping were in 14 zip codes with the highest rates of gun violence in the city.

Still, budget constraints in the city have led to an overall divestment in resources for quality-of-life issues like dumping and sanitation as city leaders fight the crisis of gun violence that has plagued the city over the last two years.

"No matter what neighborhood you live in, no matter what your zip code is, you deserve to have a safe, clean street," Gauthier said during the hearing.

Gauthier will hold another City Council hearing on abandoned vehicles on Friday, May 13 as part of the #JustServicesPHL campaign. City Council will continue to debate and hold hearings until the June budget deadline.