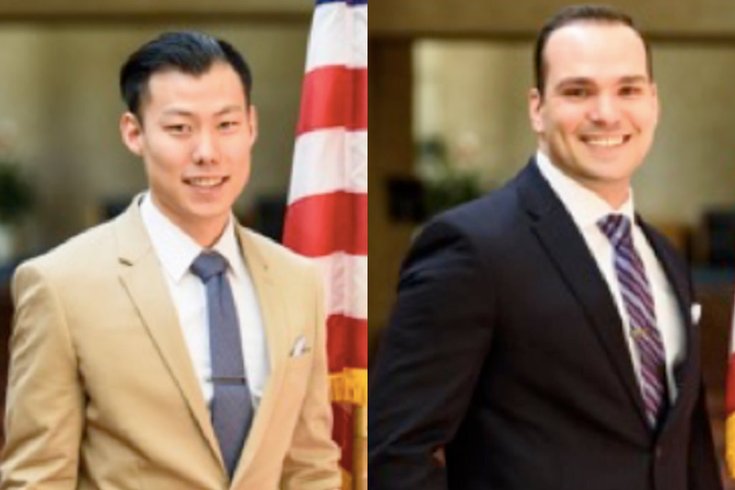 Former Marines Zenas Pak and Anthony Pandiscio, both of Philadelphia, have found that transitioning back to civilian life brings its own set of challenges.

The path to a higher military rank brings its share of challenges. But it is well-worn and direct.

Former Marines Anthony Pandiscio and Zenas Pak are just two of many military personnel who found that transitioning back to civilian life brings its own set of challenges.

And they're not always so straightforward.

"Leaving behind all of the other Marines and going back into civilian life, you kind of feel alone and unsure of the path to walk," Pandiscio said. "In the military, things are very neatly laid out for you. You know how to get to the next rank.

Pandiscio and Pak, both of Philadelphia, each credit the nonprofit NS2 Serves with helping them navigate their way forward as civilians. They are completing the nonprofit's 11-week residential program, which trains veterans as SAP analytics software specialists.

"We give them a certification in something that's in great demand," said NS2 chairman Joe Kernan, a retired vice admiral and Navy SEAL commander. "There's thousands of companies that use SAP software."

The nonprofit flies the veterans to Leesburg, Virginia, where they spend 60-to-70 hours each week studying the ins and outs of SAP analytics software. NS2 Serves not only covers their room and board, but provides a monthly stipend.

More than 125 veterans have graduated from the program since it launched three years ago. Nearly all of them had a job lined up by the end of the program, Kernan said.

BACK IN THE CLASSROOM

Pandiscio and Pak hope to join the success stories on May 10, when they graduate at the Army Navy Country Club in Arlington, Virginia, not far from the Pentagon.

"It's a great opportunity," Pak said. "For someone like me, without a college degree, finding a job out in the workforce is difficult. It opened up a lot of doors for myself and helped me get back on my feet."

Pak, 26, of North Philadelphia, spent four years in the Marines, advancing to a squad leader while stationed in eight different countries, including Jordan, Israel and Djibouti. After being discharged in October 2015, Pak enrolled in a few college courses, but says he struggled to find his footing.

Pak learned of the NS2 Serves program through his sister, an SAP employee. Being back in a classroom — and one filled with veterans making a similar transition — is refreshing, he said.

"It's good to be back in that type of environment," Pak said. "We put all our work, all our hours, and all our time into our studies. To finally pass it is an indescribable feeling."

Pandiscio, 29, of East Falls, spent eight years in the Marines, serving as an infantryman. He was deployed five times, including tours in Iraq and Afghanistan, before being discharged in 2014.

He learned of NS2 Serves as he completed his bachelor's degree at St. Joseph's University. Despite earning a degree in business intelligence and analytical data, he applied for the program.

The workload has been intense, Pandiscio said, forcing his fellow classmates to join together. Due to their military background, Pandiscio said the teamwork is the easy part.

"Marines, we tend to have a bit of an ego and a pride," Pandiscio said. "We definitely have to humble ourselves once you come to the program — and realize we don't know everything. I have to push my nose into those books and study."

As Pandiscio describes it, a firehose of new information gets turned on each morning. It doesn't get shut off until evening and the veterans are typically studying well past dinner.

"Once the instructor stops teaching the lesson, we have to turn and sort through that information on our own, so we can understand it and apply it," Pandiscio said. "It's just very fast-paced."

But the rewards — graduation and a job in the civilian world — are just around the corner.