The fire occurred at Philadelphia Energy Solutions in Southwest. Officials say no employees were injured; it is the second fire at facility this month 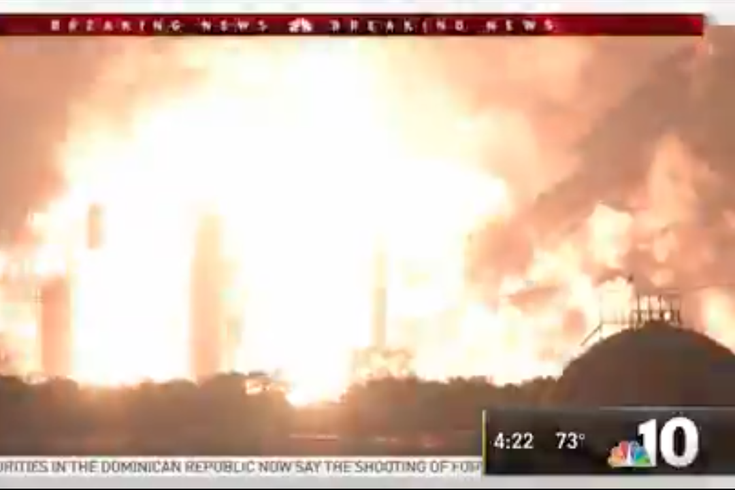 An explosion erupted at the Philadelphia Energy Solutions Refining Complex on Friday, June 21, 2019. No one was reportedly injured, but it resulted in a three-alarm fire. And the explosion shook homes in the surrounding neighborhood, Delaware County and South Jersey.

Firefighters were called to the Philadelphia Energy Solutions Refining Complex in Southwest Philly around 4 a.m. Friday after a vat of butane reportedly exploded causing a large fire.

Firefighters have contained the three-alarm blaze at the 150-year refinery complex, however it was not under control as of 7 a.m., according to the Philadelphia Fire Department's Deputy Fire Commissioner Craig Murphy. No injuries or evacuations have been reported.

Murphy said the fire was "substantially different than when we got here," and that the city's firefighters were working with Philadelphia Energy Solutions to make sure the flames did not spread.

Commuters reported seeing large flames light up the sky around 4 a.m. from the Schuylkill Expressway and in South Philly. NBC10 reported that homes as far as South Jersey felt the explosion.

MORE: This fire is at Philadelphia Energy Solutions Refining Complex. ABC News reporting this is the second fire this month. People heard booms and explosions around 4 am. @WKBW pic.twitter.com/owdcQBDaj7

Landed at 5 a.m. and immediately greeted by an oil refinery fire. My Uber driver is yelling and swearing. Welcome to #Philadelphia! pic.twitter.com/pt3EhsLpbd

Absolutely incredible images we’re getting out of Philadelphia where there is a fire at an oil refinery. There are reports of several explosions. Right now there are no reports of injuries. I’m following this story closely. #FirstAlert @Live5News pic.twitter.com/oYGy3c3JMK

Just witnessed this explosion heading to Philly airport.. praying no one was hurt pic.twitter.com/S0fcN50HaT

The Philadelphia Fire Department had put out a shelter in place warning for nearby residents and businesses east of the fire, which occurred in the vacinity of  31st Street and Passyunk Avenue, as precaution due to smoke plume, according to the Office of Emergency Management.

By 7 a.m. that warning had been lifted. The office also said refinery officials found "no detectable inhalants."

Due to a fire response at the PES refinery at 3100 W. Passyunk Avenue, Philadelphia Fire Department is asking residents and businesses east of the fire location in South Philadelphia to shelter-in-place until further notice. pic.twitter.com/WIC1Oc8y1u

The cause of the fire is still unclear.

Philadelphia Energy Solutions' two adjacent refineries at Girard Point and Point Breeze refine 335,000 barrels of crude oil every day, according to the company's website. The complex says it's the largest on the U.S. Eastern Seaboard.

This is the second fire this month at the Philadelphia Energy Complex. A much smaller fire occurred there on June 10. It sent up a plume of black smoke that was visible in part of Southwest and South Philly, and it was quickly contained.