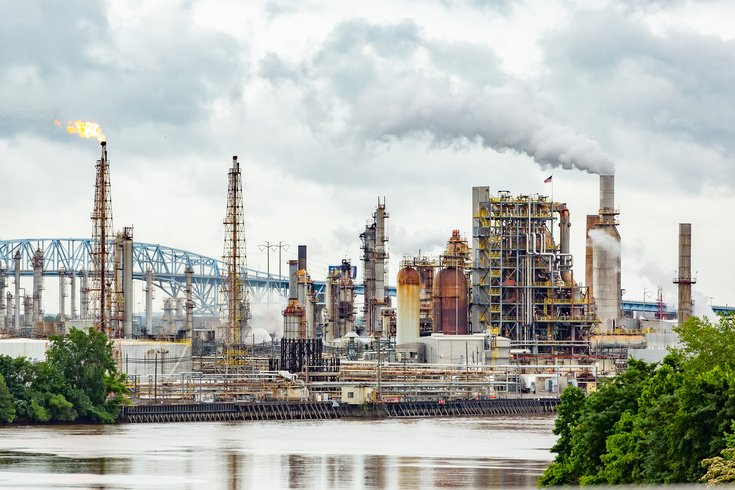 The explosion Friday morning at the Philadelphia Energy Solutions refinery in Southwest Philly does not pose any immediate danger to the surrounding neighborhoods, according the city's health department.

The Health Department does not have any findings indicating any danger at this time, spokesman James Garrow said in an email. Preliminary testing – both at the refinery and in the adjacent community – did not reveal any ambient carbon monoxide, hydrocarbons or hydrogen sulfide.

"Samples were also taken from up- and downwind of the refinery and were transported to the Air Management Service Laboratory and are currently being tested for the presence of air pollutants," Garrow said.

The two samples were tested for 61 chemical compounds at the Air Management Services lab. Neither sample found any chemical compounds to rise above – or near – safety levels set by the American Conference of Governmental industrial Hygienists.

"To be able to see a visible plume, that means the concentrations are very high," said Peter DeCarlo, a chemistry professor whose research includes taking air quality measurements throughout the world. "For people who are downwind from that, that can exacerbate a number of respiratory problems, asthma in particular."

The plume would dilate as it traveled farther from the refinery, DeCarlo said. People who live east of the refinery likely would be the most affected, including some South Jersey communities like Camden and Cherry Hill.

There's also the possibility that gas products, including formaldehyde and carbon monoxide, entered the air, he said.

By late Friday afternoon, Garrow said the smoke had dissipated and any danger stemming from the plume had passed. The health department had not seen any increase in asthma-related complaints attributable to the smoke.

Firefighters responded to the refinery around 4 a.m. after a propane tank reportedly exploded, prompting a huge fireball and a three-alarm fire. No major injuries were reported. Firefighters had the blaze contained, but not under complete control within a few hours.

Propane is produced in large quantities during the petroleum-refining process to produce gasoline. The colorless and odorless hydrocarbon is then further refined to be sold as liquefied petroleum gas (LPG).

The fire department initially reported that a butane vat had exploded.

The U.S. Environmental Protection Agency reportedly is working with city officials to place air monitors along the refinery perimeter to check air quality levels. Air monitors also could be placed within the surrounding community.

"If they can get away from it, that would be great," said Roman,  chief executive officer of the Jane and Leonard Korman Respiratory Institute. "But that's difficult to do when that's your livelihood and that's where you live. The recommendation is to stay indoors and close the doors and windows.

"If you're a jogger and you like to exercise, this is not a good day to go out there."

The lungs regularly filter out pollutants and other particles, Roman said. But the concentrations of irritants stemming from the explosion could be enough to overwhelm those defense mechanisms.

"An event like this could trigger an exacerbation," Roman said. "That exacerbation increases shortness of breath, your ability to get oxygen and could put you in the hospital."

Dr. Wissam Abouzgheib, a pulmonologist at Cooper University Health Care in Camden, said such explosions carry two major respiratory risks – the immediate heat of the explosion and the plume of smoke that ensues.

The heat exposure could cause major airways to swell, particularly in the lungs, which have a very fragile lining, he said. Symptoms are immediate and include shortness of breath, coughing and wheezing. Anyone within close proximity to the blaze, including firefighters, could be at risk.

"If it's not recognized and treated – and treated immediately – the airways could shut down," Abouzgheib said. "For residents who live very close, if they were close to the heat generation, they need to be very careful."

"If patients have significantly underlying lung problems and they're seeing particles near their houses, it's a good idea to avoid that area for now," Abouzgheib said.

Breathing in large particles could cause bronchospasm, a sudden tightening of their airways, he said. Symptoms include wheezing, shortness of breath, chest tightness and coughing.

People who experience severe symptoms should head to the emergency department, Abouzgheib said. Those experiencing mild symptoms should avoid further exposure and visit urgent care or their primary care doctor.

Located off the Schuylkill River, the Philadelphia Energy Solutions refinery is the largest oil refinery on the East Coast.

The refinery is the single-largest source of particulate emissions in Philadelphia, according to the city's Office of Sustainability, and accounts for nearly 16 percent of the city's carbon footprint – and that excludes the fossil fuel products exported off-site.

The byproducts of refineries include carcinogens such as benzene and toluene, DeCarlo said. That places neighboring residents at long-term health risk, too.

"We can't lose sight of the fact that there are people who are still living downwind and get exposed to it on a daily basis," DeCarlo said. "There's the acute, immediate impact of this fire and then there's the chronic exposure that people are going to be exposed to continually at lower levels."

As a climate scientist, DeCarlo said, ideally, the United States would move away from fossil fuels in the long term. But for now, he said society needs to consider moving them away from large population centers.

"I understand where we are and our need for our economy to run with fossil fuels at the current time, but making a refinery in an urban area is probably not the best place to put that," DeCarlo said. "There are other refinery complexes that are outside of large urban populations. Maybe we should think of where it makes the most sense to do this."