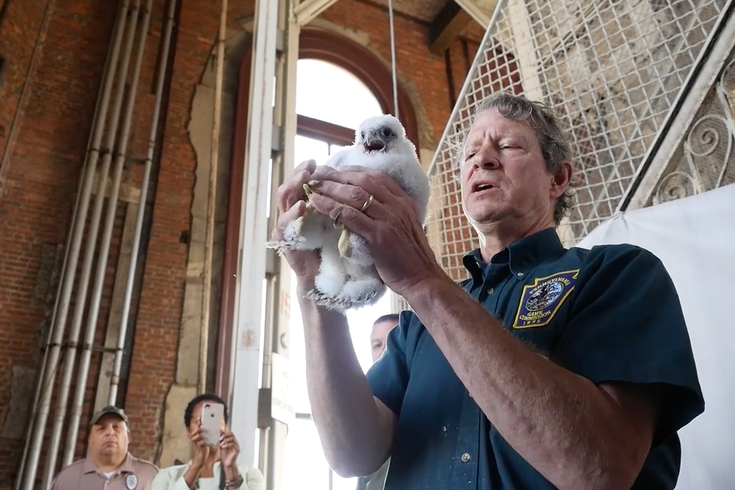 Art McMorris, the peregrine falcon coordinator for the Pennsylvania Game Commission, holds a 20-day-old falcon that was hatched in the nest atop of Philadelphia City Hall.

New video posted online Tuesday documents the annual visit to the peregrine falcon nest atop Philadelphia City Hall by an expert on one of the most powerful and fastest bird species in North America.

The video was produced by Urban Video Productions, the visual arm of Philly-based city planning and design firm Urban Engineers. Some members of the company's video team recently started a podcast called "Bird Nerd," which explores how birds interact with the man-made environment and conservationism.

On its second episode, Art McMorris, the peregrine falcon coordinator for the Pennsylvania Game Commission who leads the nest visit to City Hall in the video, explains how peregrine falcons evolved, died off, and have ultimately reemerged in Pennsylvania.

Michael Mullin, a videographer with Urban Video Productions and a host of "Bird Nerd" accompanied McMorris when he ventured up the tower below Billy Penn in May and interviewed McMorris for the podcast's latest installment also released Tuesday.

The peregrine falcons they visited on City Hall have been documented up there since the 1940s, McMorris tells Mullin, and the current mother falcon has been there since 2009.

Here's the entire episode of "Bird Nerd" from Urban Engineers, if you want to know more.

McMorris conducts a nest or banding visit like this every year at the end of spring.

"We keep our visit as brief as possible," he said in the video. "We only do essential things. And the only reason we do that is to aid the recovery of the population so there is a net benefit to the birds."

Once he was up there, he verified the nest results — how many falcon chicks there are, the location of the adults, and the ages of the young. In the video, he gives the newborns exams and identifies that they're 20 days old and healthy.

"Good for you little guy," he cooed.

McMorris also latched on identification bands to help track where the new peregrine falcons go and where they nest once they grow older, in an effort to track growth and population density.

These falcons haven't always enjoyed such a fruitful existence in the commonwealth.

From the 1950s to the 1970s, peregrine falcon populations in their native North America crashed due to DDT poisoning — a powerful insecticide now banned in most countries, in part because of its effect on wildlife. It eventually brought the species close to extinction.

Today, Pennsylvania is considered a population source, mainly due to conservation efforts like banding and widespread pesticide bans. Peregrine falcons were taken off the Endangered Species List in 1999.