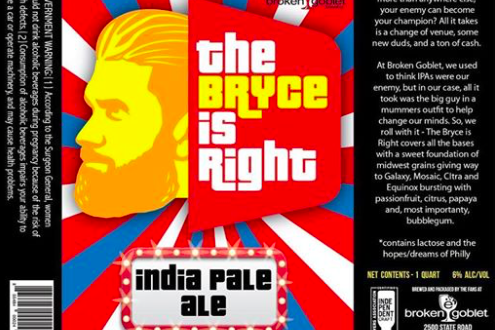 Under his new mega-contract, Harper will be in Philadelphia for the next 13 years, giving the Phillies a legitimate superstar to help them reach the elite level the city relished a decade ago.

RELATED: What they're saying: Bryce Harper got paid, and the Phillies still have money to spend

It didn't take long for Philadelphia to find edible and drinkable ways to celebrate Harper's arrival. Two of the city's favorite items to consume — beer and soft pretzels — are now going to be available in Bryce Harper form.

Broken Goblet Brewing in Bucks County announced it will debut a Bryce Harper beer, "The Bryce is Right," in May.

"The Bryce is Right covers all the bases with a sweet foundation of midwest grains giving way to Galaxy, Mosaic, Citra and Equinox bursting with passionfruit, citus, papaya and, most importantly, bubblegum," the brewery said of the upcoming IPA.

Philly Pretzel Factory also is evidently selling Bryce Harper-shaped custom soft pretzel, if you're in the know and ask the right baker to fulfill the order.

We have talented bakers @ our stores, including the Langhorne team who welcomed the latest Phillies acquisition w/ this amazing piece of food art. Now that is one tasty beard! Feeling inspired? Contact your local store w/ your custom pretzel request #pretzels #foodart #sportsfans pic.twitter.com/MIuBLWRiOz

With 13 years of Bryce Harper ahead of us, we can only hope there will be more of these promotions to come. It's safe to say Philadelphia's seafood scene is in for a boom if Mike Trout signs here in two years.