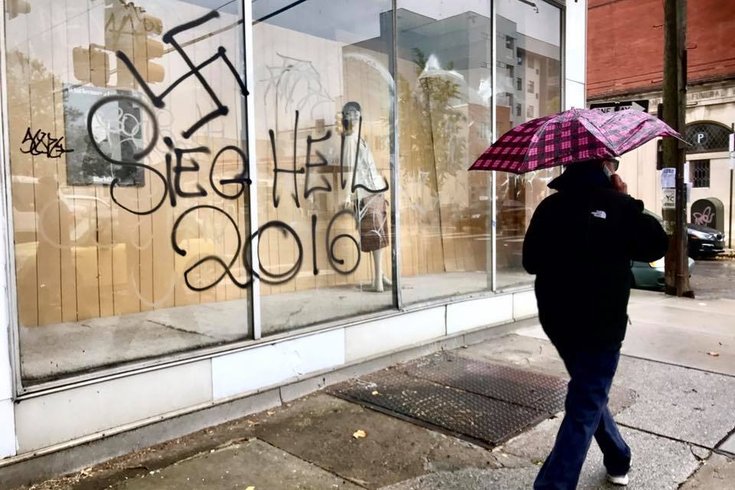 This photo shows one of two swastikas that were spray-painted on the window of a closed business at 1300 S. Broad St. in South Philly. The phrase "Sieg Heil" is German and translated it means "Hail Victory." It was a common chant at political rallies in Nazi Germany during the 1930s.

Philadelphia’s district attorney has announced the creation of a six-member "hate crime task force" to "vigorously prosecute" hate crimes in the city.

District Attorney Seth Williams told Philly.com on Monday that the six prosecutors, one in each of his office’s six designated zones, would gain expertise in the correct handling of all hate-crime cases.

The formation of the task force comes at a time when there's been a reported rise in hate crimes, both nationally and locally, following the election of Donald J. Trump as president of the United States.

Incidents reported in Philadelphia have included black students at the University of Pennsylvania being added to a racist GroupMe called "N***** Lynching" and swastikas painted on a South Philadelphia storefront, among others.

A joint statement issued Monday by Williams, City Solicitor Sozi Pedro Tulante and Police Commissioner Richard Ross said their offices will "continue to prosecute any and all hate crimes to the fullest extent of the law," adding that "violence or damage of property will not be tolerated."

Pennsylvania’s crime code has no statute on hate crime, with the closest offense being “ethnic intimidation,” which covers the "malicious intention toward the race, color, religion, or national origin of another individual or group of individuals" but does not cover incidents targeting the LGBTQ community. In addition, an ethnic intimidation offense is filed in connection with another crime.