Victim of the crime had displayed Clinton signs 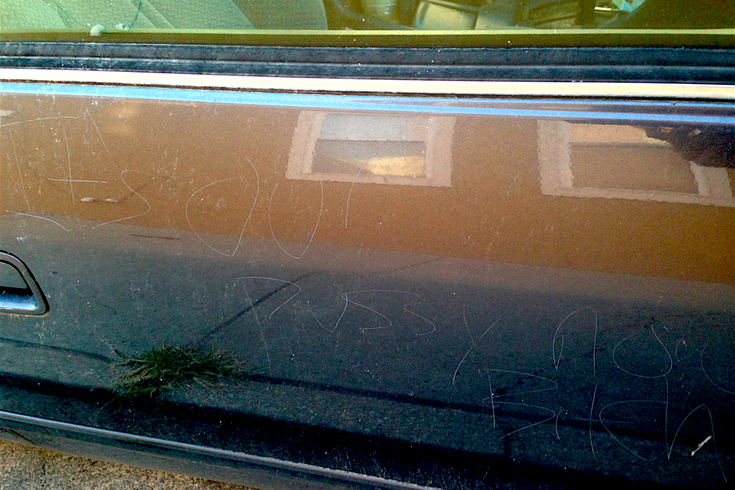 Drexel University professor Adrienne Juarascio awoke Saturday, Nov. 12, 2016, to find her car had been keyed by a vandal. The person scratched the word used by President-elect Donald Trump when discussing women in a recording of Trump released during the 2016 presidential campaign. Juarascio, of South Philly, said she voted for Hillary Clinton this week and had Clinton campaign signs displayed at her home. PhillyVoice has edited this photo to make its content more visible on digital displays.

In what has quickly become a disturbing pattern since Donald Trump won the U.S. presidency, yet another vandal has maliciously damaged property in South Philadelphia, this time the car of a research psychologist at Drexel University.

On Friday night, at 18th and Reed Streets, Adrienne Juarascio discovered the following message carved into the passenger side of her parked Toyota Camry: "It's our p---- now, B---h."

It's language ripped straight from the final feverish weeks of a presidential campaign that has exposed a deeper division in American communities than seemed imaginable six months ago.

"I'm not sure [why I was targeted]," Juarascio told PhillyVoice on Saturday morning, a few hours after she reported the incident to Philadelphia police. "I am a big Hillary supporter and had signs at my house. Maybe somebody saw me get out of my car going home."

"Now that they have a leader who's given rise and spoken to their fears, they feel vindicated and that these behaviors are implicitly accepted." — Adrienne Juarascio

On Wednesday morning, police responded to a report of two swastikas spray-painted on the window of the former Meglio Furs building at 1300 South Broad Street, one of them a replacement for the "T" in Trump's name. Later that afternoon, offcials reported two other acts of vandalism in South Philadelphia, including a racial message sprayed on a car ("Trump rules black b---h") and another swastika painted on a utitlity box.

Black students at the University of Pennsylvania were then hit on Friday with a racist cyberattack inviting them, en masse, to join a GroupMe page called "N---- Lynching."

Juarascio, who'd read in horror about all of these incidents, gathered her thoughts and took to Facebook to denounce the wave of crime:

"I’ve lived in Philadelphia for over a decade and have never once felt unsafe living in the city. When three days after the election, "It's our p----y now, B---h" gets keyed into my car door, it’s hard to ignore the impact that electing a misogynistic, racist, xenophobe as our president will have on the people of our nation. The growing number of incidents of intimidation and harassment that have occurred since Tuesday should be terrifying to all of us. And since we can’t count on our new president to condemn the outpouring of racist, sexist, anti-semitic, and homophobic insults from some of his supporters in the past couple days, the rest of us will need to continue coming together to fight hatred in all of its forms. So, to whoever decided to key my car, thanks for providing an extra burst of motivation to help make my community a better place in every way I possibly can."

Philadelphia Mayor Jim Kenney wasted no time condemning the string of local incidents this week. On Saturday morning, he issued a yet another statement about Thursday night's alleged attack on a gay man at 4th and Oregon Streets in South Philadelphia.

"It is difficult to express the full extent of the devastation and anger I felt upon learning of this hate crime," Kenney said. "To the victim, you have my sincerest apologies, both as the mayor of this city and as someone who resided in South Philadelphia for most of my life. I will do everything I can to ensure that neither you nor any other Philadelphian feels unsafe because of who they love.

"To the people who committed this crime, we will do everything we can to see you face justice," the mayor added. "Your actions have no place in the City of Brotherly Love and Sisterly Affection. Now more than ever we must be focused finding unity and common ground with our fellow Philadelphians, not letting hate divide us." 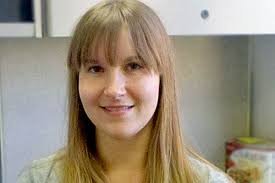 Police told Juarascio they believe the incidents in South Philly may be linked to a group of suspects, including the unidentified man seen in a surveillance video released on Thursday.

"I think generally people are kind and compassionate here," Juarascio said. "My experience has been wonderful. I expected this maybe in other parts of the country, but not here. It's surprising and disappointing."

A recent Ph.D. in clinical psychology, Juarascio said that whoever is responsible for these acts is displaying the personal profile many believe helped lift Trump over the top by carrying swing states on the electoral map.

"I think it's that people have felt marginalized or excluded from our current president or from liberals around them who live a different lifestyle," Juarascio said. "Now that they have a leader who's given rise and spoken to their fears, they feel vindicated and that these behaviors are implicitly accepted."

Even though Juarascio feels "less safe than I did a couple days ago," she said she's not letting this experience paralyze her.

That doesn't excuse any of this vulgar vandalism or the hateful spirit driving it, she added.

"I think we need people who did vote for Trump for other reasons to come out and denounce this," Juarascio said. "I hope our Republican elected officials come out against this. Trump has to do the same. It's the only way we can come together after such a trying election."