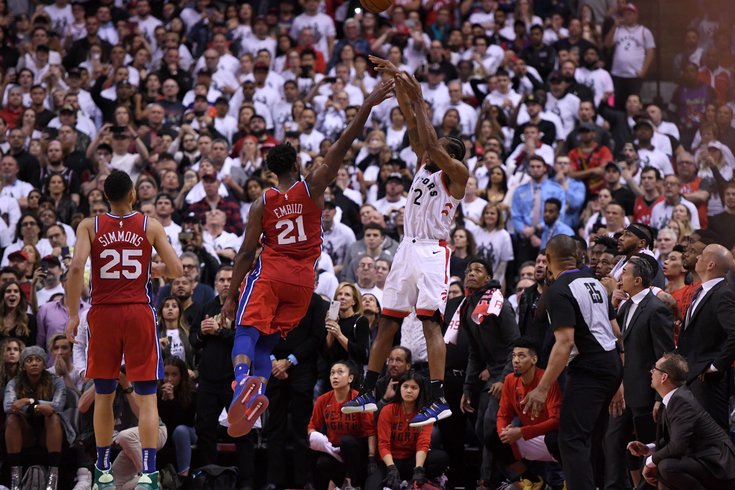 On Sunday night, Kawhi Leonard forever etched his name in the annals of Philadelphia sports' most crushing, gut-punch losses, when his corner fadeaway at the end of regulation bounced four times on the rim and through, sending the Sixers home after two rounds of the playoffs for the second consecutive year.

While devastating, it certainly wasn't the worst end-game loss in Philadelphia sports over the last 30 years. I don't know if this is of the "too soon" variety or not, but here's a sadistic ranking of the top 10 such losses, in countdown form:

We didn't know it at the time, but the 2013 season was the one-year window in which the Eagles had a chance to make some noise under Chip Kelly, before the rest of the NFL figured out how to stop him and he couldn't adapt. In a home playoff game, the Eagles took a one-point lead with a Zach Ertz TD from Nick Foles with a little under five minutes to go.

However, a long kick return by Darren Sproles (then of the Saints) that included a horse-collar tackle penalty by Cary "Sconces" Williams set up an excruciating clock-bleeding drive by the Saints, who ended it with a walk-off field goal.

The biggest missed opportunity in the game was a horrific drop by Riley Cooper, which you can re-live at the 2:56 mark.

There's also an argument here for the Eagles' 2010 home playoff loss to the Packers.

The ending of this 2008 game was a lot like the ending of the Eagles-Saints game above, in that the Eagles scored to take the lead late, but again, a long 14-play, clock-burning drive resulted in the lead changing hands.

With about three minutes to go, the Eagles got a couple first downs, before four consecutive Donovan McNabb incomplete passes ended the season.

Led by Jameer Nelson, the No. 1 seed Hawks built a 30-1 record heading into this matchup, but a John Lucas III three-pointer with six seconds left sent St. Joe's home.

Nelson had a chance to tie it going to the other way, but his jumper fell well short.

I actually had this higher on the list, but after crowd-sourcing my order to the other sportswriters for PhillyVoice, as well as some other friends, two different people (including our Kyle Neubeck) said that it should be lower, "because, well, it's a f****** horse."

But Philly really could have used this win from it's hometown horse. "Hometown horse," lol. I typed it, and it's so dumb that I'm just leaving it. Anyway, it was 2004, and the Eagles had just suffered three straight crushing losses in the NFC Championship Game, and none of the four major sports teams had won a title in over 20 years. It reminds me a bit of the episode in The Office in which Kevin loses his parking spot. He had recently just lost his girlfriend, but he fought to get his parking spot back, which felt like a big win.

Except in the case of Smarty Jones, Philly didn't even get its small win. After winning the Kentucky Derby and the Preakness, in the third leg of the triple crown at Belmont, Jones had the lead heading down the stretch, and then...

Ugh. I remember that people who weren't even sports fans were super into this. Like, my mom, for example, was more hyped up for this race than any sporting event I can remember, including my own. In other words, the scope of this race reached a broader audience than, say, a Flyers appearance in the Stanley Cup might.

Another quick anecdote: Have you ever wondered if people get so annoyed by the Phillie Phanatic that they assault him? Well, it happens. The Phanatic went to Belmont the day Smarty Jones raced, and he was harassing an old co-worker of mine, who was a Mets fan from Staten Island. My friend warned the Phanatic to leave him alone, or else he was going to punch him in the face. The Phanatic, of course, did not heed this warning, and, well, my friend made good on his threat.

Apparently, the guy inside the Phanatic suit was cursing at him in a muffled voice, lol. The moral of the story for the Phanatic: You can pretty much do whatever you want in the confines of Citizens Bank Park, but once you leave that comfort zone, all bets are off.

Obviously, you just saw this, but...

There's little worse than the "alive one moment, game over the next" nature of a sudden death overtime goal in hockey. It happened to the Flyers in title-clinching fashion.

It was such a weird goal, too. Nobody even seemed to know what was happening until the Blackhawks players were going nuts on the ice. Brutal.

4) Phillies lose to Cardinals in NLDS, Ryan Howard tears Achilles on series-clinching out

The 2011 Phillies won 102 games, but they lost in the decisive Game 5 series finale against the Cardinals by the score of 1-0. That loss was bad enough, but to add injury to insult, Ryan Howard tore his Achilles on the final out of the season.

Howard would never be the same, and the Phillies' run of great seasons would come to an end with only one World Series championship to show for it.

In Game 7 of the Conference Finals, Patrik Elias put the Devils ahead 2-1 with 2:32 left in regulation, sending the No. 1 seed Flyers home.

But that's not at all what that game is remembered by. It is far more well known by Scott Stevens ending Eric Lindros in the first period.

Lindros would never play for the Flyers again.

Yes, the Eagles' loss to the Panthers in the 2003 NFC Championship Game was a horrific performance, and the 2004 Super Bowl was an extremely disappointing loss, but they don't hold a candle to the expectations that went unmet in the 2002 NFC Championship Game against the Buccaneers, a team the Eagles had previously owned, and one that hadn't won a cold-weather game, like, ever, or something.

With the Eagles facing a 10-point deficit, but driving, you know what happened. Don't actually watch this:

Had the Eagles scored on that drive, they probably weren't winning anyway, but Barber's INT sealed the fate of an Eagles team that seemed to under-perform in its most crucial moments.