District teachers have been without contract, raises for nearly five years 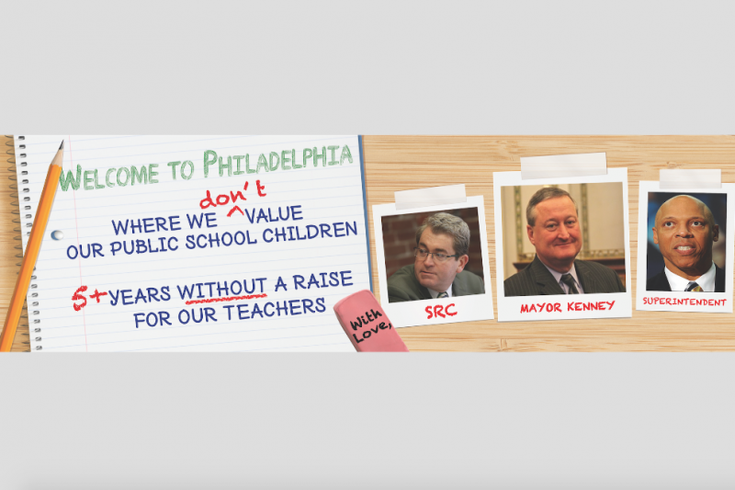 A Philadelphia teacher raised thousands of dollars through a GoFundMe campaign to put up a billboard on I-95 shaming city and school district officials.

Commuters who drive along I-95 in Philadelphia will catch a glimpse of a billboard shaming city and school district officials over teacher contracts and raises. Or lack thereof.

The billboard was the brainchild of George Bezanis, a social studies teacher at Central High School, who raised more than $5,000 through crowdfunding to have it created and placed along I-95 south right before the Center City exit.

The sign, which is now up, reads, “Welcome to Philadelphia, where we don’t value our public school children,” alongside photos of School Reform Commissioner Bill Green, Superintendent William R. Hite Jr. and Mayor Jim Kenney.

Kenney got a spot because of the city’s role in helping to fund the public school system. He unveiled his annual budget proposal to City Council for fiscal year 2018 on Thursday, and it didn't include plans to increase school district funding.

The district’s teachers have not had a contract or raises in nearly five years, which Bezanis said on the GoFundMe page is forcing teachers to flee to jobs in neighboring districts and is ultimately hurting the city’s students.

“As each month passes with no agreement in sight, Philadelphia loses more and more great educators to other surrounding districts. It is the over 100,000 children in the district, however, who suffer the most because of this lack of a stable workforce.”

He said he plans to continue to raise funds to keep the billboard erected until the school district and Philadelphia Federation of Teachers reach a contract agreement.