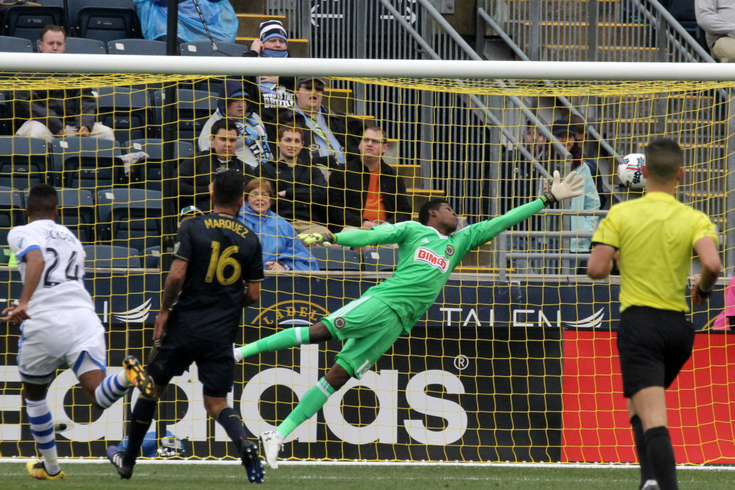 You could feel it coming, right?

When Montreal pulled that goal back before halftime, it planted that seed of doubt in the minds of Union supporters.

There's no way they blow a three-goal lead, right?

After playing their best half of soccer since last summer, the Union slumped to a 3-3 home draw, looking mentally frazzled as the league's longest winless streak stretched to 15 games. The pressure to perform looks like it's weighing incredibly heavily on Union shoulders, with frustration and exasperation entirely evident as nothing seems to be going their way.

You can't start any better, right?

I showed up to the game ten minutes late and heard the "Doop" song going off while trying to park my truck.

For the second straight match, Jim Curtin's team came out strong, executed a solid game plan, and played like the better side in the first half.

On that first goal, they again pressed smartly and turned the opponent over in their own half of the field. Unlike the New York game, however, Philly was able to capitalize with a nice cutback and side-footed slot from Roland Alberg. 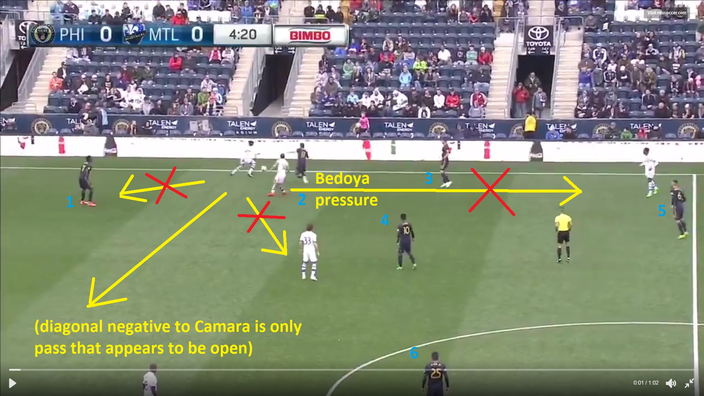 In the screenshot, you see that there are six players in the vicinity of the action. Even Ilsinho, the left winger, is in a position to press right back Chris Duvall if necessary.

It starts with pressure from Alejandro Bedoya, who is again pushing up from his number eight position. He angles Ambroise Oyongo into a short pass for Hernan Bernardello, who picks his head up, realizes he's bracketed, then stumbles into a bad back-pass.

The reason for that is because every other passing lane is blocked.

Bernardello realizes that he only has one way to go and he botches the play.

The key here is that Bedoya moving up from the eight spot leaves Alberg and Sapong in a situation to counter as a pair. That can't happen if Bedoya is playing as a ten unless someone from deep realizes what's happening and sprints forward.

The Union had trouble down the middle in this game, which has been the case throughout the season.

For everything that Haris Medunjanin does well, he is a defensive liability in transition. That's no secret; he basically told us in the preseason that he's not a ball-winning d-mid and that he will need help in those situations.

On the second goal, however, he has to do a lot better. 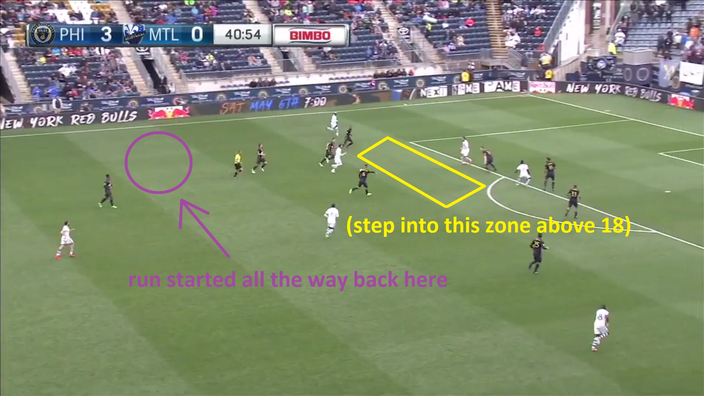 There's a lot going wrong on the first Montreal goal.

First, Nacho Piatti receives the ball with back to goal about 40 yards out. He turns, beats both Bedoya and Pontius, then moves into the area near the 18.

Second, you can see Medunjanin pointing to Jack Elliott to step into the space. Yea, he's in a position to make a play, but Elliott stepping up allows Piatti to slot a through-ball for Matteo Mancosu instead.

Here's what it looks like when Elliott peels with Mancosu and Medunjanin fails to do anything at all: 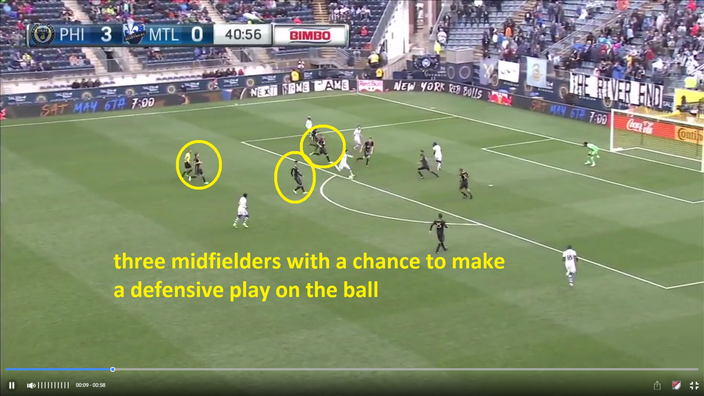 Piatti is free at the top of the 18 with two sagging center backs, two midfielders who couldn't win the ball, and a third midfielder who didn't even try to win the ball.

To Bedoya's credit, he took blame for the goal, explaining that he and Pontius could have been more physical in that situation or at least fouled Piatti.

The tricky thing as a center back is knowing when to leave your mark and step in this kind of situation. I don't know how the Union teach it, but center halves are usually told to step right around 20 yards out, which is right outside the box. If the attacker hits a through ball instead, you hope the recipient is offside. If not, then at least you're denying a shooting attempt from the ball carrier.

It's one of the hardest situations to defend as a center back, and while Elliott could do better here, he was really hung out to dry by his midfield.

On the second and third goal, there was a lack of urgency in defensive transition.

These weren't counterattacks, per se, with guys sprinting back to play "help" defense. One was a long ball and the other was a diagonal out to a fullback, with Montreal playing quickly and directly.

The second Impact goal was the product of a pinpoint cross and glancing header.

Keep an eye on Richie Marquez in this clip, as he seems to recognize the run between the center backs but can't position himself ball-side of Anthony Jackson-Hamel.

Jackson-Hamel pulls another one back for Montreal. They trail by only one now! #PHIvMTL pic.twitter.com/wCcOvc25tl

Elliott is correctly marking Piatti, who slows his run.

On the equalizer, it's the same concept – a quick ball forward and the Union failing to show urgency in assignment. 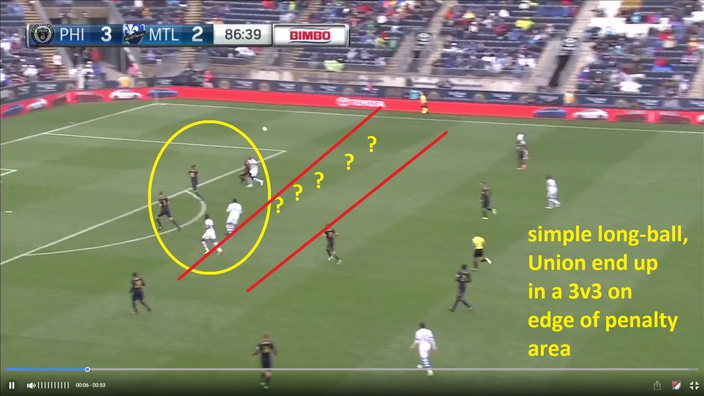 Ciman plays a long-ball over the top and somehow the Union are in a 3v3 situation just outside their penalty area. Bedoya and Medunjanin are not in the play. Derrick Jones, a defensive sub, is the second-highest player up the field.

Again, it's just way too easy, with the defenders scrambling to make a play while the midfield isn't in position to help.

Deservedly back on the score-sheet with a man's performance.

He drew a ton of fouls and added an assist and key pass to go along with the goal, but I thought the biggest positive was that he had four shot attempts. When C.J. is stuck in a rut, it's because he isn't getting looks. In this game, those looks came.

Better from Pontius, who got another assist with a Medunjanin knockdown.

He had two more before that, too, with a nod across the box for Elliott, which resulted in an Evan Bush save. The second header actually happened just before the second goal and kept the play alive.

I like Pontius on the right side of the midfield because he's on his natural right foot and playing in a position where he can cross the ball into the box. He tried two in this game. It eliminates that drag run to the inside, where he gets on his stronger foot, but he did try one coming the opposite way and cutting onto his left. That was his only shot attempt.

In the first twelve minutes he scored a goal, played a dangerous cross into the box, almost got on the end of a through-ball, and dropped a 50-yard dime for Pontius.

He probably could have hit the penalty better, but put enough force into it to get a deflection into the back of the net.

It's pretty clear to me that Alberg at the ten is the way forward for Philly. No, he doesn't have the steam to run a full 90 minutes, but what CAM does? Attackers are on the field to score goals, not play defense.

Wanted to highlight this pass from Roland Alberg... pinpoint deep dime into the channel. pic.twitter.com/zUTgY8aEln

Thought he got away with a cheap shot on Duvall in the corner, then suffered a revenge tackle about 10 minutes later.

His best contribution, playing on the left, might have been the little clip into the box for Elliott, who earned the penalty.

Otherwise, he finished with zero shots, zero key passes and zero assists in a game where the Union scored three goals.

He already said he should have done better on the Piatti goal.

Outside of that play, most of his work came on the right side of the field, which I found intriguing. I think he's comfortable on that side, but also tends to drift over there since Medunjanin will slide a little bit to other side since he's facing that way on his strong left foot.

It also speaks to Montreal's danger down the left, with Piatti and Oyongo being more effective than Duvall and Oduro in this game. 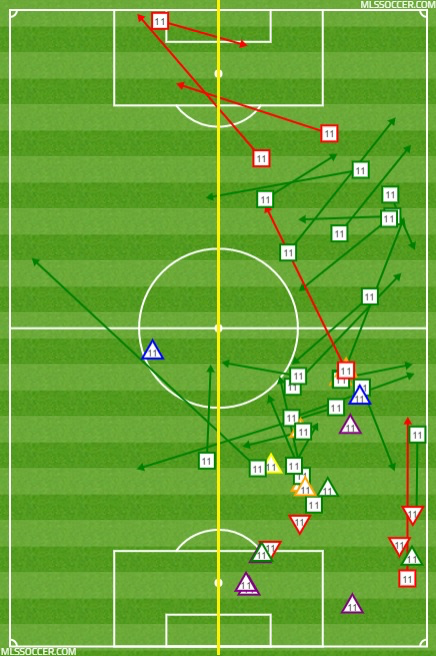 Secondary assist on the second goal for Medunjanin.

Again he passed the ball well and took some solid set pieces, but his defensive liabilities need to be addressed.

He was in there for the Piatti matchup but actually saw more of Oyongo in this game.

There was a 19th minute challenge on Piatti that I thought Gaddis won, but he was whistled instead. That frustration probably lead to the dissent caution a little later in the half.

People say Gaddis should have been closer to Oyongo on the second goal, but the left back takes a quick touch and puts in a perfect cross. I don't know how much blame you can give Ray for that, when Jackson-Hamel is running free in the box anyway.

Gaddis finished 3/3 in tackles with one interception, seven clearances, and six recoveries.

Oyongo logged two key passes from that side, one assist, and five failed crossing attempts.

Piatti had one key pass on Ray's side, two failed cross attempts, and the one shot on goal that had nothing to do with Gaddis.

For what it's worth, I didn't think he was any worse or any better than what we've seen from Keegan Rosenberry this year.

Excellent first half passing the ball and winning the penalty for the third goal.

We talked about how he could have stepped on the first Montreal goal.

On the second, the ball is over his head but he's not in the wrong position. On the third, there's slight bit of ball-watching as Blake spilled the shot.

He needs time to develop some chemistry with Marquez and understand his role on a team with a relatively soft midfield spine.

Same as last week, where he didn't account for a run right in the middle of that 18 yard area.

That was the second goal. The first goal wasn't his fault.

The third goal, then, was a situation with a lagging midfield and long ball that fell to Fabinho's mark.

He lost Oduro on a backpost run just before halftime, but the speedy Impact attacker didn't do much else in this game.

Duvall had a half-dozen crosses into the box, four which came in the second half.

On the third goal, he somehow ended up with Jackson-Hamel as the Union were trying to handle a simple long ball.

His attacking game was also a bit different with Ilsinho on this side of the field for the first time.

I don't think anybody is saving the first or second goal, but the rebound on the third is something you just don't see from Andre.

Probably should have iced the game with that 1v1 effort.

Only about 10 activities and seven passing attempts for Fabian in a 17 minute shift. He played in Bethlehem on Sunday in a 2-0 loss.

Brought in as a defensive sub, he was inexplicably high up the field when the Impact equalized.

Saghafi started the game well with a nice advantage call on the first Union goal.

His biggest issue was allowing Laurent Ciman to get away with persistent infringement on C.J. Sapong, who was fouled seven times in this game, eight if you count that fifth-minute advantage.

The situation with Ilsinho and Duvall could have been avoided if he had gone over to talk to the Brazilian after the hard corner foul.