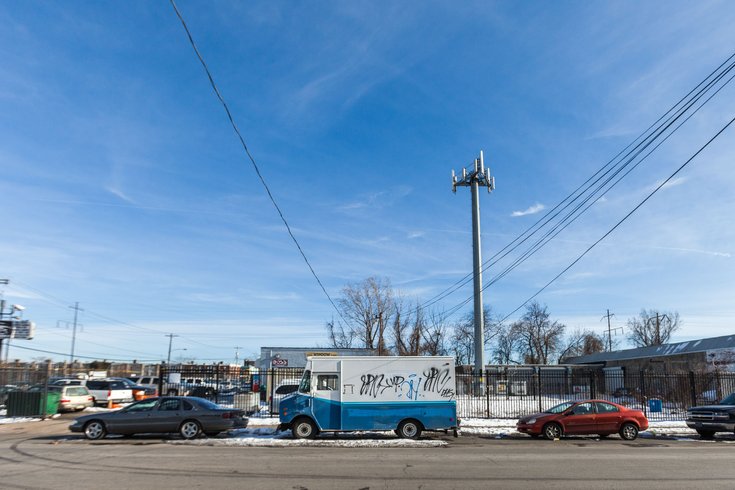 A converted Tastykake delivery truck in the Paschall section of Southwest Philadelphia.

Read More
Want to live small? Think big.
The tiny house movement is sweeping the nation. At under 1,000 square feet, these miniature homes offer simple living, stripped of years of accumulated junk. When it comes to owning just what you need, the freedom to explore life outside the bounds of stuff begins.
Television shows like Tiny House Nation chronicle tiny homes, and micro-apartment buildings that house narrow space dwellers are growing by the day in New York.
But Philadelphia is one city that hasn’t caught the house fever — yet.
Last week, a meeting of the Philadelphia Tiny House and Co-Housing Community Development brought about 15 people to Istanbul Restaurant just off South Street. The agenda: to articulate a vision for a tiny house community in a tough love town.
An eclectic mix of people from the city and the burbs showed up: set designers, teachers, retirement-age eccentrics. They began dividing into committees devoted to researching zoning rules, developing community relations and keeping the group connected with one another. Even at the time of this writing, a tiny community of tiny-housers is taking root.
Their dream, as of yet un-pinned down, is just good-natured potential, until it starts to take off -- or settle down on -- the ground. Just as motivations vary, so do their visions of success, and their roles in the motley pioneer band.

Realtor Tom Greene, who organized the group, believes in intentional community. A maze of contradictions, while he loves his freedom too much to settle down in a tiny house himself, the mission to realize a positive impact comes naturally.
“I’m a manifester,” Greene told PhillyVoice.com, “so I create things and generate ideas, and I have to bring people to them or they don’t succeed. And sometimes I help people who have ideas to see their ideas realized.”
In keeping with his mission, Greene helped create SoFair Farms, an eco-village of tiny houses in Fairfield, Iowa, a small town not far from the Maharishi University of Management. Greene graduated from Maharishi with a degree in Sustainable Living and a practice in transcendental meditation, serving as a teaching assistant for a course on tiny houses, and even building his own. If ever a group needed a spiritual leader, Greene is the self-appointed guru for the job.
A tiny house village in Philadelphia is a far cry from an enlightened reality just now. But could a community take root? It’s still early, but signs point to yes. It seems as though we're poised for a mass reaction against consumerism, given that most of us can no longer afford to furnish the American dream.
“Philadelphia's prime for tiny houses,” Greene said. “This generation is a tiny house generation. Because you’ve thrown away a lot of the old ways of working really hard, thinking there's going to be a pension and a paycheck at the end ... and making money off real estate the way we used to make money is gone.”
It’s hard for Greene to feel completely at home at North Bowl in NoLibs because he’s a generation apart from the millenials who hang out there. But what makes his vision clear is its breadth. While for real estate developers, the mega-mansion market’s collapsed, so has home ownership transformed for those looking to buy.
An attendee who asked to go by Stellarr Chance sees minimalism as a way to have it all. A Tastykake truck totaling 98 square feet that she bought on Craigslist will serve as a restaurant on wheels — both shelter for herself (and a “road dog”) as she tours the country and dining for her guests-of-the-evening. She'll buy fresh ingredients from farmers' markets along the way and cook them onsite.
“Wouldn’t it be neat to have a mobile underground restaurant and host little dinners in all the towns that I go to?” Chance told PhillyVoice.com. 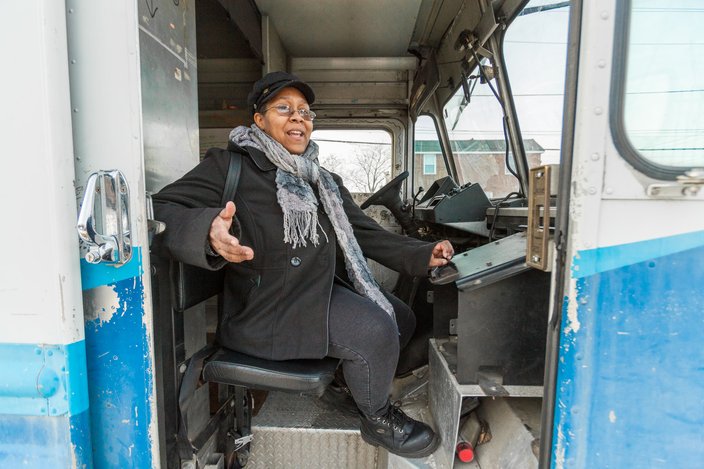 Stellarr Chance hopes to have her tiny house completed by June, in time for Colorado's Tiny House Jamboree. Thom Carroll / PhillyVoice.
She wants to take in the most popular places in the country, from Florida “just so I can say I drove to Florida in a truck,” fireworks factories down Route 1, Burning Man festival, the Grand Canyon and Seattle (ever since seeing Sleepless in Seattle for the first time.) For starters, once the truck is back up and running, an open house on South Street will get the word out: “Sometimes you have to be visible to become invisible.” Greene volunteered to fix the truck.
Is Chance concerned with food truck, or any, licensing regulations? Well, she hopes she can slide under the radar, living incognito for the thrill of getting caught. Living free means staying young at heart. If a cop gives her trouble, she'll make him something to eat.

Charles Schwarz and his wife got rid of their car in 2006, and they don't miss it. Going against the grain is a familiar idea to the Roxborough couple. Living among true believers is appealing, too.
“These are people that think about life,” Schwarz told PhillyVoice.com. “They think not only about their own life, but about life in general and society and their place in it.”
Still working at retirement age, Schwarz flinches from the thought of living in an over-60 community where everyone's the same, down to their race and religion. He’d rather take the risk of forging new ground in the company of other rogue explorers.
The hardest part of letting go will be deciding what to do with the artwork they’ve gathered over the years. It's a question of beauty over pragmatism: Do they ditch the one or two original paintings that now adorn their walls?
“We’ve done it before and we can do it again,” Schwarz said. “It’s amazing how quickly you forget about what you used to have.”
In architectural terms, Schwarz is considering a home inspired by a photograph in one of the big, thick books he reads with a friend. A picture in an textbook about the history of Arkansas features a two-room, 400 square foot house with a wraparound veranda. The look caught his eye, and stole his heart. But whether history will repeat itself in urban territory remains to be seen.
Stellarr Chance hopes to decorate her truck with imagery from Joss Whedon’s short-lived sci-fi cult series, Firefly. An exterior painted black “like the black of space” with the Firefly logo on one side would serve as a nod to fellow fans of the show, while inside, candles and curtains engulf you in the sense of being home. It's a fantasy come to life, plus gas and destination. On the back of the truck, the words will read: “We aim to misbehave.”

Sam, who asked that we not use his last name, went through a personal crisis two years ago that saw him switch from family doctor to union sheet metal worker. Now, “I get to use my hands and my mind, and I missed doing that,” he told PhillyVoice.com.
Part of his attraction to tiny house living is the hands-on connection to an earth that naturally produces no waste; a secret composting toilet in his West Philadelphia home also saves water.
As for the perfect tiny house,”It's this ephemeral thing in my head: Oh,it’ll be beautiful, it’ll be wonderful, but I just don't know what it’ll be yet.”
Dreams aside, building a house means getting your hands dirty, a task to which Sam is no stranger. Living off the grid — harvesting rainwater, insulating so as to get maximum efficiency from heating and cooling units, and even growing his own food -- appeals to the young urbanite. Being grid-tied, a way of selling back surplus electricity generated by a solar array to the electric company, offers an ecologically neat middle ground.
“Every living system on this planet except us produces waste. There’s no such thing as waste in nature; it's always some sort of cycle.” As to whether that cycle is irreparably broken, he can’t say. Sam has two young kids, and can't bear the thought of passing on a world doomed to death by
resource depletion. He wants to leave something that will last.
That means finding a community where apocalyptic worries can be remedied in peace, rather than in hiding: “I don¹t want to close myself off from the rest of the world because of my views. I think that’s wrong,” he said. “But I would like to be among like-minded people, but not be isolated.” 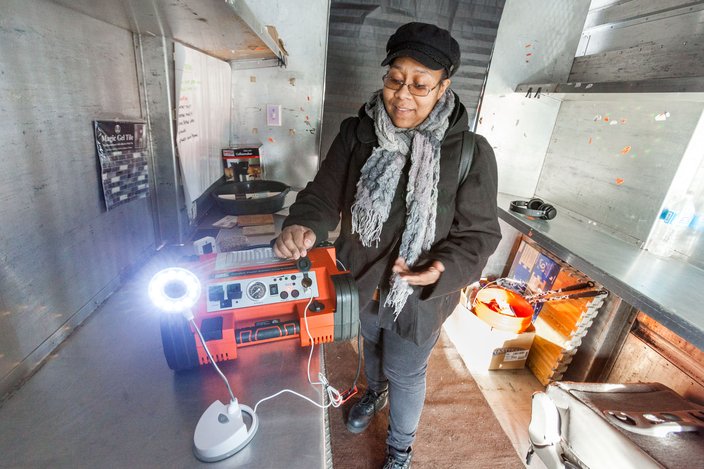 A generator powers electricity to the off-the-grid truck.  Thom Carroll / PhillyVoice
“It was the fire that made me realize I didn’t need a lot to be happy,”Chance said. In 2005, the house in Radnor where she was working as a live-in nanny burned down. She and her son, then 12 years old, were unharmed by the blaze, but they lost their clothes; thankfully, no pictures. Chance tried to wash out the mold that clung to sweater fibers, but it was no good. Their things were gone. Yet in the wake of loss, a vision emerged for a mobile lifestyle where people, novelty and dreams of a better tomorrow are always in supply.

For all their camaraderie, it’s diversity that unites these frontiersmen and women, and it’s diversity that may be their salvation.
One the biggest questions of founding a new community is neighborhood acceptance. In a city where affordable land and progressive civic attitudes don’t always go hand in hand, getting approval from residents of a part of the city is necessary to build.
“Germantown is more open to creative ideas, I think,” Greene said. “Nobody likes blight so if it’s filling in an area of blight, that’s good. But if you’re coming down to Kensington and Northern Liberties, there’s lots of blight, but land’s so expensive it’s hard to believe you can even afford to build a house on it. So how do you plan a community? You’re thrown to going to places that are on the fringe.”
You just don’t want to raise red flags in a city where blight is preferred over renewal.
“A house was being rehabbed, and all of a sudden, there was a sign for sale,” Allison Weiss, organizer of SoLo/Germantown Civic Association, told PhillyVoice.com, “In mid-process. So we contacted the realtor to find out what happened, and he said the neighbors didn’t like it, that he was fixing up the property. So he’s stopping… Change is hard sometimes. I think people are terrified of gentrification.”
Whether the tiny house movement is synonymous with gentrification remains to be seen. Right now, it is an innovative view of a fresh future for this city, not only for aging progressives but also for a younger generation disenchanted with a consumerist life of things. In a city of neighborhoods, the search for common ground has just begun.