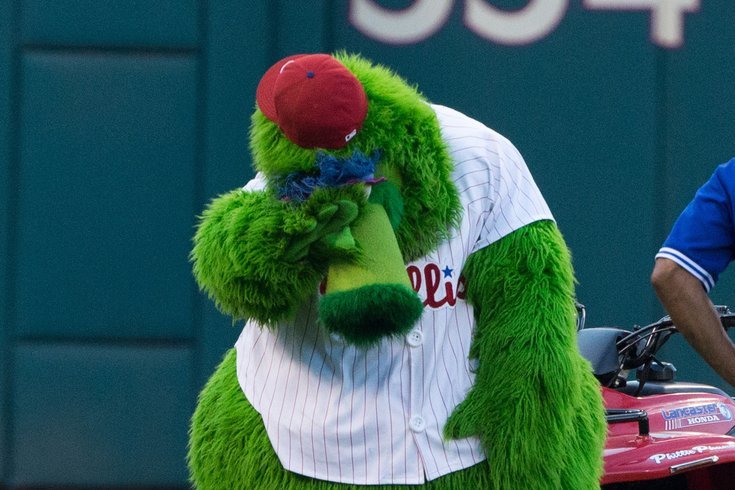 'Jeopardy' host Alex Trebek revealed on the game show that he isn't a fan of the Phillie Phanatic, although he does like the Philadelphia Phillies.

Philadelphia Phillies fans already have it bad enough: they have to watch the division rival Washington Nationals play in the World Series and they currently don't have a manager for their favorite team.

The last thing anyone needed was for "Jeopardy!" host Alex Trebek to pour salt on the wound.

On Friday evening, Trebek let it slip that he's not a fan of the Phillie Phanatic, the lovable Galapagos Island native who found a home in Philadelphia many moons ago.

Next thing he's going to tell us is he hates puppies, Lucky Charms, grandmas, sunsets, non-Canadian bacon and Mario Kart.

The Phillies were taken aback by Trebek's blasphemy.

In the past, "Jeopardy!" has paid homage to the Philadelphia Eagles winning Super Bowl LII and Nick Foles getting MVP honors. One man recently placed a wager in honor of the game's final score. This was just a gratuitous, deadpan shot at the Phanatic.

What does Alex Trebek have against the Philly Phanatic? #Jeopardy pic.twitter.com/vIi8vVNLDG

"I'm not a fan of the Philly Phanatic"

Well screw you too, Trebek!

Well Alex Trebek doesn’t like the Phillie Phanatic and now my heart is broken 😢. @Jeopardy @Phillies

Trebek did say he likes the Phillies, so he's not completely irredeemable.

Still, as others have pointed out, we may need to bring in reinforcements.

Trebek just said he isn’t a fan of the Phillie Phanatic. We need Gritty to pay the Jeopardy host a visit.