Are things breaking the Phillies way this season? 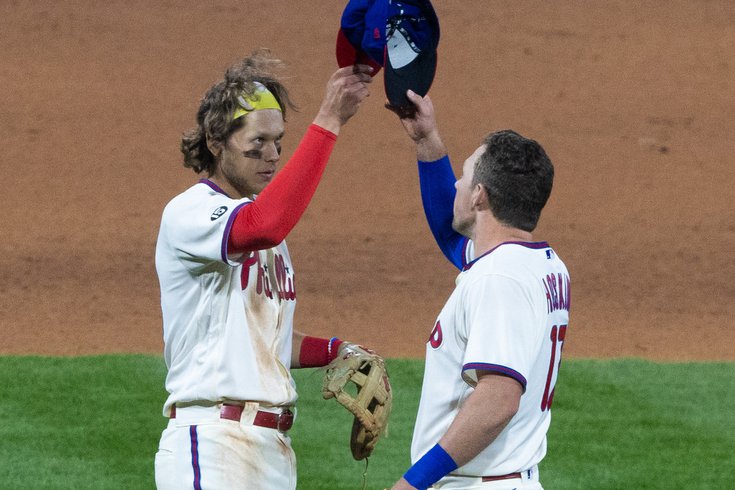 Rhys Hoskins and Alec Bohm have both been good to start the season.

There have only been six games played by the Phillies so far in this marathon, 162-game baseball season. But already, it feels like the baseball gods are smiling upon the team from South Philly.

It's been a decade since playoff baseball has been played in Citizens Bank Park — and nearly half of the teams that called that stadium home since 2011 have had playoff expectations. But something always went wrong. There were injuries. There were horrible, god awful bullpens. There were managers not up to the task, or players who faltered when things got serious come September.

It is way, way premature to proclaim this this season will be different, even after the Phillies impressively won five of their first six games against the two best teams in a loaded NL East.

However, things do seem to be breaking the Phillies way early. Here's why:

The Nationals were never really expected to threaten the Braves or the Mets for the division title, but most sports books and predictors expected them to at least be better than the Phillies this year. Due to some extremely bad luck as the MLB season progresses amid a pandemic, the Nats were hit hard, and the more than half dozen impact players who were put on the shelf to start the year in Washington are certainly going to put the team in a hole to start the year.

Nationals announce a flurry of roster moves. These players head for the IL with no reason given:

As Phillies fans know from experience, returning to play from COVID — or even from having to quarantine while healthy — can set back your form a great deal. In Scott Kingery's case, for example, it's yet to come back. It may be a struggle in Washington this season.

The NL East is just one part of a bigger playoff landscape the Phillies hope to play their way into — and that could include competing for a wild card spot with teams from different divisions. With the Dodgers runaway favorites in the NL West, the Padres were a leading candidate to take a wild card slot with their team stacked with talent.

One of the most popular picks to be the NL MVP this season, Fernando Tatis Jr., had a very bad setback during the season's first week, and it's possible San Diego will be without its most dynamic player. With a labrum tear — one that could make it hard for him to swing anytime soon — there is fear Tatis will be shut down for the year and may need surgery. It's a bad break for the Padres, but it does benefit Philly.

It goes without saying that we preface all of these insights by saying "it's early," but the NL East has not been impressive outside of the Phillies so far. In a division many thought would be the best in baseball, just one team has a winning record, and one team has a positive run differential.

Having a 2.5 game lead this early is pretty rare, and the Phillies will have a chance, with their next seven games against the Braves and Mets yet again, to make the divide even larger. Or they could relent it just as quickly as they ascended. We'll know a lot more by this time next week.

Still, as of now there is a lot more reason for optimism in the Northeast corridor if you are a Phillies fan than if you are a fan of a team that earned its second win of the season like this.

And now for what is probably the best sign of all. Rhys Hoskins and J.T. Realmuto had nagging injuries this spring that had fans and coaches alike a little concerned that the duo may not be ready for Opening Day. In addition, 34-year-old Andrew McCutchen, now almost two years removed from his ACL tear, has been on a decline and didn't look like himself much last year.

Hoskins has been on a tear to start the year, hitting .417 with six doubles. Realmuto has started five of six games behind the plate and is hitting .333 — and had a big three-run homer against the Mets earlier this week. McCutchen has drawn six walks and has shown he can still move, blasting a triple and stealing a base in the early going. Health will could be a determining factor in whether the Phillies can end their playoff draught.

The Phillies had one of the worst defenses in baseball last season, particularly in the infield where plays were not being made by first baseman Rhys Hoskins and rookie third baseman Alec Bohm.

And while the team has made three errors in the first two series of the year, none wound up costing them a game. The defense isn't perfect but it is definitely better, as the team sits in the middle of the pack by most metrics so far. Except for one.

According to Baseball References' "Defensive Runs Saved Above Average," the Phillies number, six, is the best in the majors with their defensive efficiency rating 11th. The eyeball test proves this, as Bohm has fielded third perfectly so far this season and has added a handful of highlight plays. Here's one you may have seen before:

Early candidate for Web gem of the year from Alec Bohm pic.twitter.com/2QEctePoQv

Many know about the trials and tribulations of the 2020 bullpen but it was also their bad defense that cost them a playoff spot. The early returns show the defense is better, and that could be the difference this fall.