Why the Phillies feel different this year 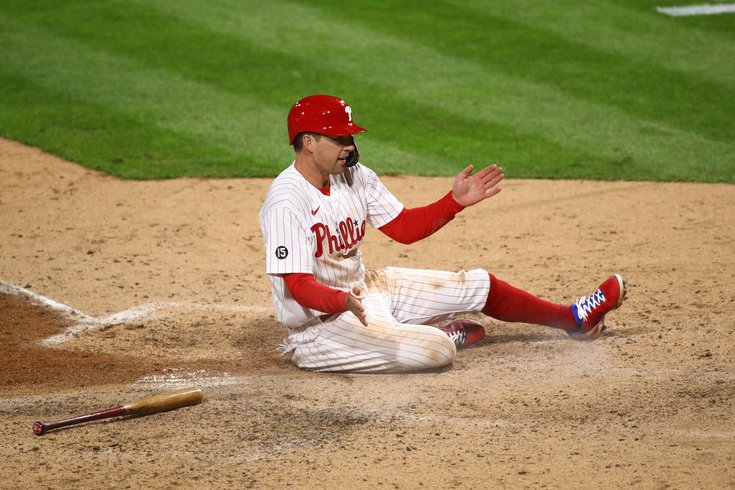 The Phillies have some mojo early this season.

The Phillies are not going to finish the season undefeated.

But that's not important. They've started 4-0, and even if they lose 70 times between now and the end of September, it will have been one of the most successful seasons in team history.

But they haven't lost yet. And there is no way to overlook what they've done to two really good baseball teams, beating the Braves thrice, and the Mets while facing the best pitching each has to offer.

It's rather impressive to see that the Phillies have moved the needle with their four straight wins. Starting the season with the fourth best odds of winning the NL East, Philly has actually — in just four games (2.5% of the season) changed their NL East odds from +850 to +775, via pa.unibet.com.

Over at fivethirtyeight, their projections started with the Phillies finishing below .500, and with a 23% chance of making the playoffs. Just four short games into the season, the analytics site now says the Phillies will finish 84-78, and have a 35% chance of being postseason participants (a single game behind the Braves and a record the same as the Nationals).

And for good measure, some typically skeptical columnists in the City of Brotherly Love are also hopping on the optimism train. Here's a snippet from The Inquirer's David Murphy:

For the last eight years, I’ve been the guy who shows up this time of year to tell you that the Phillies aren’t nearly as good as you hope they will be. Prior to that, I was the guy who dropped in to tell you to take a few tranquilizers and stop trying to bench the shortstop because of a few awful April losses. I was not a popular person, but I was usually right.

This year? I’m here to tell you to believe.

The Phillies might not go 162-0, and their bullpen might not go the entire season without surrendering a run, but they have a chance to surprise some people. And that would still be the case even if they weren’t 4-0.  [Inquirer.com]

Clearly their impressive streak to start the season is significant, and it's more than just encouragement for Phillies fans to believe in the team.

Jose Alvarado allowed the bullpen's first run of the year in the ninth Monday night, but it didn't matter much because the Phillies had a three-run lead when he took to the hill. The Phils' bullpen has been getting the job done, and it absolutely did not in 2021.

With a pitching staff that is looking like it has the stuff to be a postseason rotation, seeing a starting pitcher walk off the field — like Matt Moore did against the Mets in the fourth inning — is enough to make viewers find something else to watch. The Phillies, were, after all, down by two runs to one of the best pitchers in baseball in Jacob deGrom who was positively dealing, and were in the midst of a jam. But players whose names you'll no doubt learn soon like Sam Coonrad, Brandon Kintzler and Conner Brogden, came in and confidently kept things close.

"Just being able to keep us in the game," Bryce Harper told reporters after the game. "I think that is going to be the theme this year. Just keep us in it. We're going to battle."

Not to pile on with more intrigue from the Phillies' fourth game of the year, but they did something else that was really impressive Monday evening. Facing DeGrom, who threw six innings of almost untouchable stuff, Rhys Hoskins made a horrible base-running blunder that cost the Phillies their only real chance to score against the New York ace (when he tried to unsuccessfully stretch a double into a triple). On the field, Adam Haseley horribly misread a shallow fly ball that fell in for a hit. Gregorius also made a throwing error that could have cost the Phillies.

But somehow, the Phils were able to mitigate the impact of missteps, which is another thing they failed to do in the past. It's one thing to be a terrible fielding team — which the Phillies were last year and are probably going to be this year again. It's another thing for that not to be the key for unraveling of your club each night.

Anyone can be a hero

In Game 1, it was Jean Segura, hitting a walk-off single in the 10th inning after the Phillies bullpen walked a tightrope to keep the Phils in the game after Aaron Nola blew a solid start.

In Game 2, it was Zack Wheeler not only on the mound, but at the plate, driving in two runs to add insult to injury with the Phillies shutting out the NL East-favored Braves.

In Game 3, it was Rookie of the Year runner-up Alec Bohm, driving in a run with two men on and the game tied at 1 — after Andrew Knapp became the only Phillie to hit a homer this year earlier in the victory.

And in Game 4, it was heads up base-running that saw two runs score on a Mets throwing error that put the Phils ahead for good.

The Phillies don't need their biggest stars Harper or J.T. Realmuto to bail them out. Which will likely give them even more opportunities to contribute with the lineup up and down able to make clutch plays late in games.

If the Phillies are this confident, this early, it could wind up being the key ingredient for the first playoff run in South Philadelphia in a decade.