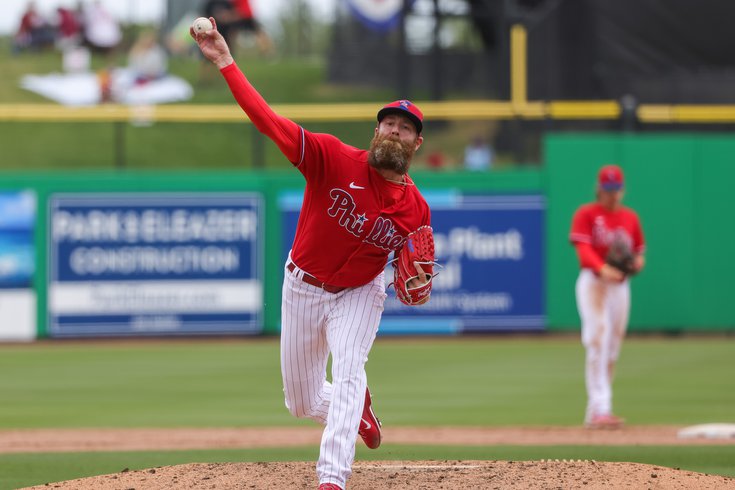 The Phillies' bullpen was so historically bad in 2020 that the team almost completely blew the thing up this offseason. Just as a quick refresher (and then we will never speak of it again), here is what the bullpen — a group of players that arguably single-handedly cost the Phillies a spot in the expanded 16-team playoff field, did last year:

You've all heard the hyperbole, but the Phillies bullpen during the shortened 2020 season was the worst performing in the history of the game.

Luckily, the Phils have completely overhauled the unit. Here's what a difference a year makes:

In addition, the Phillies in 2020 also made disastrous mid-season trades for Heath Hembree (12.54 ERA) and David Phelps (12.91 ERA), while relying on no fewer than seven arms who were 25 years old or younger and who were making their MLB debuts.

The new staff has been completely turned over, save for Neris whose 4.57 ERA in the pen last year was sadly one of the best of the unit — and well above his career average. There is a very solid combination of veteran experience with young talent in the 'pen.

The Phils also have some depth. Seranthony Dominguez is recovering from surgery last offseason and is, potentially, going to be pitching before the end of 2021. They also have arms from last year in JoJo Romero, Ranger Suarez, Ramon Rosso and Adonis Medina all on the 40-man roster and working in the minors — ready to pitch in should an injury or setback of some kind occur. In addition, their top pitching prospect Spencer Howard will begin in Triple-A, potentially shaking things up in the rotation or bullpen when he inevitably is worthy of MLB innings.

If every other facet of the 2021 Phillies plays close to the same as last year except the bullpen— performing more like an average relieving unit than the worst in baseball history — Philadelphia could have a fighting chance at a playoff spot this fall.

Just like with starting pitching, the Phillies look to have either the third or fourth best bullpen in the division by preseason rankings and projections. The thing about bullpens, though, is that it is pretty rare for a pitcher to maintain consistency over a long stretch of time. Which is why a bullpen projection in the spring rarely winds up accurate over the course of a 162-game season. Here's a look around the NL East:

The Mets return most of their relievers from 2020, a unit that ranked as the fourth best in baseball last year according to FanGraphs. The track record of arms like Diaz, Famillia and Betances will make it hard for the Phillies to score runs against their I-95 rivals.

The Braves also had a top 10 bullpen in 2020, but they are turning over their roster quite a bit ahead of 2021. Mark Meloncon, Shane Greene and Darren O'Day have all departed from Atlanta, leaving this group potentially a tad more vulnerable than they were last season.

The Nats' bullpen lost Sean Doolittle, but is returning most of the same arms for a second year after their World Series title in 2019.

Miami lost Brandon Kintzler, one of their best arms last season to the Phillies and will field an inexperienced bunch, just as they do in their rotation.

Perhaps one of the silver linings from last season's bullpen disaster is that a bunch of bullpen prospects got major league experience — albeit perhaps too soon or under stressful circumstances. As we mentioned earlier, there will be a bevy of arms in the minors this season who have pitched in the majors in some capacity.

Using that as a starting point, the Phillies hope their young arms can develop in Triple- and Double-A this summer in ways they weren't able to a season ago, with minor league seasons cancelled due to COVID.

Here are some young pitchers currently on the 40-man roster to keep an eye on, as they may appear in a game or seize a bullpen spot sometime over the summer months:

As you can see from the numbers for the Phillies 20-something pitchers in the minors right now, almost all of them have collected extensive innings across a number of levels of baseball — many of them including MLB. The hope is that some of those arms develop into bullpen staples for the Phils going forward, so they can avoid needing to bring in so many new faces year after year.