Whose stock is up, whose is down in Phillies spring training? 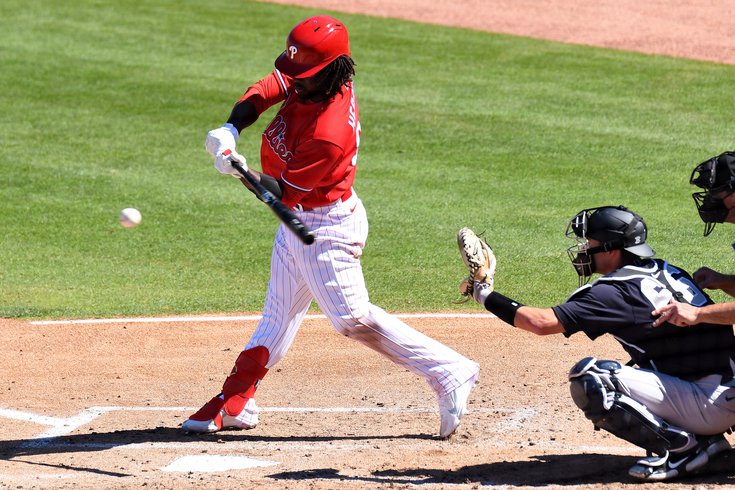 Odubel Herrera is making a strong case to make the Phillies 26-man roster.

The Phillies have been playing baseball games for about a week now, and whether it was Bryce Harper's homer on his first pitch, Spencer Howard's dazzling debut, or the ongoing battle to play centerfield on Opening Day, there has been no shortage of entertainment in Clearwater.

But just in case you don't have the time or the luxury of watching afternoon middle-of-the-week baseball and haven't been able to keep close tabs on the Phils in spring training, we've got you covered.

Here's a quick look at whose stock is up, and whose is down for the Phillies right now:

It's almost as if the Phillies pitching staff likes competition. The main candidates for the fourth and fifth starting pitching spots in the rotation have each pitched already. Spencer Howard had a dominating 1-2-3 inning Friday, making it pretty clear with his lively and overpowering fastball that he was determined to make it back to South Philly. Vince Velasquez tossed two perfect innings with three strikeouts making his opening case this week as well, with Chase Anderson doing the exact same. Matt Moore tossed two scoreless frames (one hit, one walk allowed).

Good luck to Joe Girardi and the Phillies pitching staff — it might be hard to decide what to do if this continues.

It stands to reason that if the Phillies want to make room for all four of the starters we mentioned above they could toss two of them into the bullpen (perhaps Velasquez and Howard?) to start the year. But the competition for the likely seven or eight bullpen spots has also been intense.

Scott Kingery was thought to be the most likely Opening Day centerfielder and that may be true, but with the Phillies intent on having their utility man pitch in all across the diamond, the team is most assuredly looking for someone who can man center every day. And an interesting candidate has emerged.

Coming off the bench in six games, Mickey Moniak — the until now underachieving former No. 1 overall pick — has been flashing some skills with the bat, hitting two homers in a game this past week and a boasting a .429 average early this spring.

Travis Janikowski and Roman Quinn are also playing very well to start the spring, as is Odubel Herrera, who made a sick play in the field paired with a deep homer during a start he made back on Thursday. Herrera's controversial outside shot at making it back to the bigs may actually be a possibility if he can keep playing well.

Realmuto hasn't yet appeared in a game — he his working back from that broken finger — but his stock is certainly rising as far as an Opening Day nod, as his cast came off on Friday and he is expected to slowly be able to inch toward throwing the ball and hitting, something he hasn't yet done in Clearwater.

For these intents and purposes we are obviously judging harshly from a small sample size, and the early work at the plate from former first round pick Stott has not been impressive. So far in five games he's mustered one hit and has struck out three times. He also doesn't have much of a path to the majors right now, with Didi Gregorius, Jean Segura and Kingery all under contract until at least 2022, blocking him from an every day job.

Joyce made an impressive play in the field and blasted a home run in the Phillies' second spring game, but he's done almost nothing since then and his quiet bat could cost him an elusive bench spot when camp breaks. Joyce plays very good corner outfield defense and is in theory battling it out with Moniak, Quinn, and Herrera (among others) for the role of back outfielder and pinch hitter.

Not everyone has pitched well so far, with the trio above sucking it up in their 2020 spring debuts. Nova pitched in the preseason opener and has given up five runs in 2.1 innings through two chances so far. Hammer walked three and gave up a two-run homer before being yanked prior to finishing a full inning. The sleeper prospect Falter was true to his name, surrendering three hits, a walk and a homer in his spring debut. With few games and many arms to feed, limited reps take on a big importance in spring training, and these fringe pitchers will have little room for error in their next appearances.

Haseley, who is one of the contenders to start in center, has a pair of hits including a homer this spring and has had a little hype surrounding him after he added some muscle this offseason. However, a groin strain that will force him to miss four weeks of action will not help his cause, as the timetable has him likely unready to play in the April 1 season opener. Will this effect his chances of making the team overall? Or will he find himself relegated to Triple-A waiting for another big league opportunity?