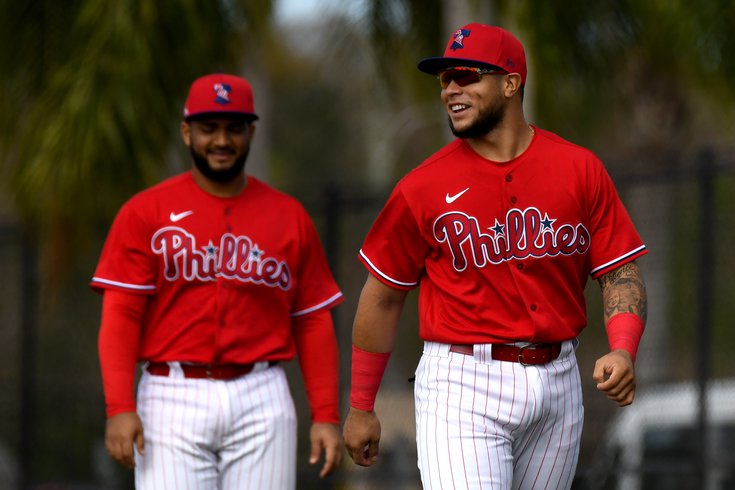 The Phillies implemented a strategy Eagles fans are probably quite (frustratingly) familiar with this offseason — the patented "old guy strategy." In addition to bringing back the entire starting lineup from 2020, the Phillies added a ton of depth this offseason by way of veterans who could take a handful of important 26-man roster spots when the 2021 season kicks off.

This "old guy" mentality is a necessity for a team that wants to compete but is extremely lacking in homegrown talent. In our latest 26-man roster projection, we expect the Phillies will only have 10 players who came up in their own farm system (38%). With an average age, we expect, of around 29.2 years old on Opening Day, it stands to reason that there will be injuries — and the team will need reinforcements.

Philadelphia has one of the worst farm systems in baseball, but it is probably a bit top heavy, as there are a bunch of players who will be knocking on the door for a big league job sometime soon.

Just below, we've broken down the top 10 prospects in the Phillies' minor league system, as rated by fangraphs.com. A short scouting report and the year they project to make an impact on the big league club are included. You'll no doubt notice some familiar names, former first round picks, and a few dark horses you've never heard of.

Howard already reached the big leagues last year, but he retains rookie eligibility (and has a +1500 chance of winning NL Rookie of the Year this season, the 7th best chance of any player according to Unibet). It is yet unclear if he will get a real crack at the Phillies starting rotation, as veterans have been brought in for depth and may snatch a job to start the year, but it seems possible if he pitches well in Clearwater he'll start in the bullpen and perhaps work his way into a starting gig. If his talent from the minors carries over, he could grab a starting spot this summer and not give it back.

Abel is the pitching prospect scouts dream of. He has been scouted since his sophomore year of high school and is big, at 6-foot-4. He has been known to throw in excess of 97 mph (as a teenager), and he was the first high school hurler drafted in the first round in 2020. Without a minor league season last year, his growth may have been stunted just a bit, but he has the talent to speed through the minor league system in two seasons and be in the mix to make the leap in 2023.

Morales is the third straight young pitcher in the top 3 and is a tall athletic hurler with a violent delivery. He is a little more raw than Abel, but he also has been pitching professionally since he was signed out of Venezuela in 2016. If he starts 2021 in Double-A, as is expected, he will have the chance to pitch his way to Triple-A and will likely be in big league camp a year from now. If he pitches to expectation he could make a push for a big league role — perhaps as a reliever if needed — in 2022.

Rojas is the kind of young ballplayer fans can be excited about. Though he is still lacking in plate discipline, he can absolutely hammer the baseball, and has a ton of raw power and elite speed. He could, potentially, be the centerfielder of the future — a spot on the lineup sheet that is certainly in need of some talent and excitement. Still pretty young, Rojas is a few years away but could be on track to make the jump in two or three years.

That Stott is currently roommates with Bryce Harper in spring training is enough to know the Phillies' franchise player is pretty wild about the former first-round pick. He is a big left-handed-hitting shortstop with power, a rarity and a very appealing talent for the Phillies. He is inconsistent and unproven but was a beast at UNLV and is currently in Clearwater making a case for a roster spot. He will likely be relegated to Triple-A to start the year, but he is a potential heir-apparent for Didi Gregorius (or for Jean Segura at second).

Being a catching prospect in Philly is... not great. You're pretty much blocked — at least for five years — by J.T. Realmuto and can either be a backup or a trade chip. That's precisely where Marchan falls, and he got a taste of MLB action at the tender age of 21 last season when Realmuto was briefly hurt. The only reason we don't project him to make the majors again in 2021 is because Andrew Knapp is the backup and the team has depth behind him with Jeff Mathis. Still, the team has some insurance for Realmuto in Marchan, and a potentially valuable trade piece for July.

A big arm — he is 6-foot-5 — and a power arm — he touches the upper 90s — Miller projects as a potential rotation piece in a few seasons. He will probably get a chance to play in Double-A this season, and will be on the same track as Morales, potentially jumping to Triple-A from good performance and getting himself in the mix in 2022 and in 2023.

Moniak has been in the Phillies farm system since being draft first overall way back in 2016, and he's just lacking that killer instinct and ability to turn his talent into results on the field. With two other former prospects battling it out in centerfield — Adam Haseley and Roman Quinn will start the year on the big league club we expect — Moniak will probably be in Triple-A to start the year. He made his MLB debut last season and could be called upon again if there's an injury or a slump to someone ahead of him on the depth chart.

Before the pandemic, Garcia was seen, like Stott, as a future middle infield staple. But COVID took a very important year of Single-A development from Garcia and as such, he's probably a year further from making the majors. Garcia will likely need at least two more years to develop his MLB case, but he does have the upside of an everyday shortstop or second baseman, and could potentially find a role as a utility man someday.

That Muzziotti is in spring training is certainly a vote of confidence for the Venezuelan, who boasts perhaps the best hands of any Phillies prospect and could be a great hitter for average someday. He lacks power and that is probably his biggest knock. With the outfield landscape wide open in 2022 after, we assume, Andrew McCutchen leaves, he'll certainly have a chance.

Other prospects to keep an eye on:

We looked at the top 10, now here's a look at 10 more prospects, each of whom has a reasonable shot of getting playing time in 2021:

The Phillies essentially have an entire bullpen's worth of pitching prospects knocking on the door. With their stable of veteran arms, there is a good chance most of the above hurlers are left in the minors to start the year, but almost all of them have a little MLB experience and the talent to seize and keep full-time reliving roles in South Philly. Be familiar with all of them, as they'll be the next men up should the Phils veteran experiment fail (due to injury or bad luck).

Medina is a special case, as he is a former top pitching prospect in the system and still projects as a back of the pen starter. If the Phillies wind up in a spot where they need a seventh or eighth man to sub in in the rotation, Medina would be the pitcher called. He has the potential to be a career big leaguer.

Falter is a sleeper pick to be the breakout farm system pitcher this year. Back from injury, and from having no minor league season in 2020, he has a lively fastball and has shown some real potential as a high-end starter. His secondary pitches are probably the missing ingredient and one worth watching in Reading or Lehigh Valley.

Maton is in the mix for a bench spot right now, and while he'll probably lose it to a veteran infielder, he has a future on the Phillies and could contribute as early as this summer. He is a very good defender and puts the ball in the air with the bat, which could be a useful talent in Citizens Bank Park.