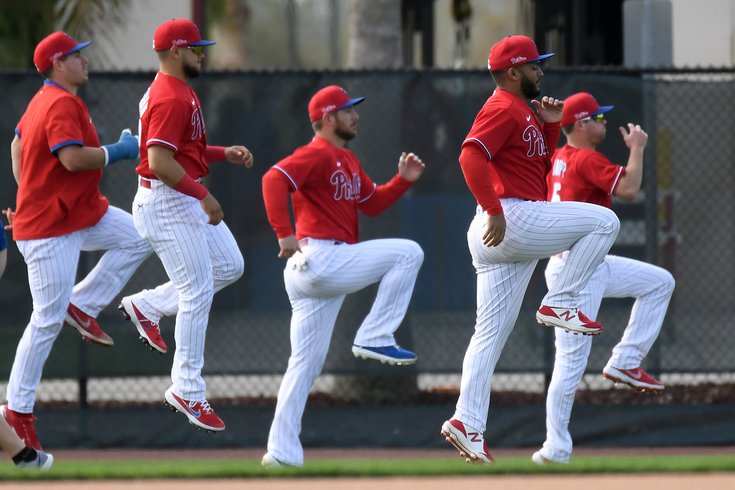 The pitchers are pitching, the catchers are catching, and the rest of the players are starting to report. Spring training baseball games are just about a week away, and the Phillies have more depth and positional battles than they've had in recent years.

And in addition to that, after committing over $160 million to offseason signings, they're hoping they can compete. Which makes this one of the more interesting and important spring training periods of the last decade for the Fightins.

We'll give projecting the roster another try, as we look to predict the 26 men who will be on the Opening Day roster because let's be honest, it's fun to try and predict things. The Phillies have added a handful of impactful veterans since our last try, so despite a few early injuries, here's how we see things shaping up ahead of April 1's scheduled opener vs the Braves:

Realmuto broke his throwing-hand thumb in a freak accident while blocking a ball from new Phils' reliever Jose Alvarado last week, but he and the Phillies are optimistic that it won't cost him his Opening Day roster spot. In fact, it hasn't really even cost him time practicing with his teammates, as he's been doing a lot to prepare for the season with a cast on.

“I like the color. It’s blue,” Joe Girardi told the media last week. “He looks good. ... He basically catches it, flips it, and someone throws it back. We’ll keep his legs going. He’ll hit with just the left hand and do some drill work. There’s a lot of things that we can do so when he is ready to go, he’s not like building from scratch.”

If Realmuto misses a few games, it'll be Andrew Knapp behind the plate with either Jeff Mathis or Rafael Marchan as the backup on April 1.

Another injured Phillies slugger, Hoskins, is coming back from offseason elbow surgery, and like Realmuto the team is spreading optimism about his ability for the start of the season. Just like Realmuto, Hoskins is doing everything he can to prepare in Clearwater.

“I think our expectations are he’ll be ready to play the field on Opening Day,” Girardi said, commenting on whether the first baseman can hit and field yet. “We’ll continue to progress through his rehab, but he’s doing extremely well. Maybe if you had a DH, you would think about it, but he’s taking ground balls. He’s going through all his progressions, which is really good.”

Girardi's expectations were given a vote of confidence Monday, when Hoskins told reporters he was good to go:

Rhys Hoskins said he was medically cleared yesterday, and is hopeful that he can be ready for opening day.

The Phillies decision to bring back Didi Gregorius locks Segura into second base, a spot where he did not make an error in 32 games last season and has a career .988 fielding percentage. If his defense is elite it will help, but the recent power outage is a concern and a reason why he likely won't sniff the heart of the batting order.

In two seasons in Philly, he's hit just 19 total homers and knocked in 75 runs. But he has a career .285 batting average and should be a reliable everyday hitter in the bottom half of the lineup.

Gregorius returns to Philly with a little more job security — he has a two-year deal now — and the Phillies hope they can get a full season of production like he gave in 60 games last season. Gregorius' power production will be key for the Phils, who are a team that has shown that they can get on base, a lot. He'll be one of the few infield staples for Girardi, with other shuffle-able pieces likely moving around throughout the season.

Bohm was the runner up for NL Rookie of the Year last season and probably could have won the award had he been called up sooner. But in 44 games, the now 24-year-old hit .338 and recorded 23 RBI — an 85 RBI pace over a 162-game season.

Bohm can play first, which will put a little pressure on Hoskins (which is a good thing as has he's struggled in recent seasons). It'll be interesting to see if he improves defensively at the hot corner, by far his biggest weakness. There's a chance he hits well and finds himself as the first baseman going forward depending on how things go down with Hoskins, the DH and obviously how Bohm performs in his sophomore season.

Harper was an All-Star in six of seven seasons spent in Washington. He has yet to make it to the mid-summer classic as a Phillie — and that has to change sometime soon. In two seasons with the Phils, Harper has produced to the tune of a 48-HR, 145-RBI pace (if you extrapolate it into two full seasons). He's been on base 38.5% of the time and has great range and a great arm in right field.

With a lineup around him that'll force pitchers to pick their poison, Harper could have an even more productive year in 2021.

The centerfield situation isn't great and it's one the Phillies have been forced to financially retreat on. They'll likely be using either Roman Quinn or Adam Haseley in center, keeping Kingery as an available fill-in throughout the infield whenever someone needs a day off, or in case of injury.

However, we have him starting on Opening Day in center because he is their best remaining position player. He gives Girardi some real flexibility, and it will be routine to see him start the game somewhere and finish it somewhere else. If his bat returns to pre-COVID form, he'll show what a luxury he really is.

Cutch will probably have one last season in Philly before their ballooning payroll will force them to part ways. McCutchen can hit leadoff and still has some wheels. He also will join Harper and Hoskins as a trio of Phillies hitters that can all lead the entire league in walks. It's not flashy, but it's a winning formula.

McCutchen has a career .376 on-base percentage and is a shoe-in to hit double-digit home runs every season. At 34, he may not be on the field every single day, but he will provide some pop and leadership in the locker room.

It's anyone's guess as to how long they'll keep big league jobs, but it appears at least for now that Haseley and Quinn will be the fourth and fifth outfielder on Girardi's bench.

Knapp is Realmuto's backup and had a breakout year in 2020, he's got his job sewn up too.

Brad Miller was inked late in free agency and will assume the role of pinch hitter and role player fill-in for 2021. Chatham is a 24-year-old infielder who has yet to play in the bigs, but has ties to Dave Dombrowski and will be fighting for the final bench spot — assuming they field a five-man bench. The Phillies will no doubt be wanting an infielder for that final slot, and Chatham has some skill with the bat, with a .298 career average in the minors.

The top trio are locks, with Nola and Wheeler likely to be Cy Young candidates from Day 1. In our first two 26-man roster projections, we went with Spencer Howard as the fifth starter, and while that definitely remains a possibility, the Phillies spent a little cash to bring in veteran hurlers Anderson and Moore, and each could have an inside track at a rotation slot.

Howard, assuming there is a Triple-A season, will be the ace in Lehigh Valley and the first man called up if and when someone struggles or is hurt. He'll be on an innings limit and monitored closely so he can be a contributor in the MLB when it is needed.

There are a lot of new faces in this projected bullpen. In fact, just Neris and Hale are technically holdovers from 2020, while Velasquez will be a long man and spot starter. Alvarado was acquired via trade, Bradley signed a big offseason deal and Kinzler and Watson were veteran signings late this winter each of whom boasts an impressive track record.

The bullpen arms competing for what will be either seven or eight spots have a lot of experience, and the Phillies will probably lean toward an older unit to open the year, giving them the option to add younger arms like JoJo Romero, Connor Brogden or Ranger Suarez if they need to during the year — while allowing young pitchers to develop. Expect one of the three we just mentioned to be bullpen pitcher No. 8 if Girardi elects to go heavy on pitching and keep a light bench.

*Italicized players are new additions to our projected 26-man roster