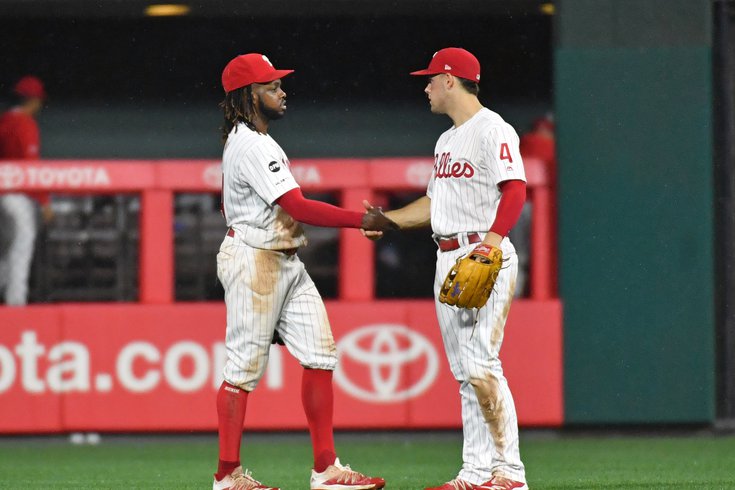 The Phillies do not yet know who they'll start in centerfield on Opening Day.

The Phillies brought back most of the lineup from 2020 for another run in 2021, but they did not fall into the mistake of being completely complacent.

After blowing what should have been an easy playoff berth last season — it would've been their first in a decade —due to a ridiculously bad bullpen and some unfortunately timed injuries, the Phillies are entering spring training this year with more depth than they have had in recent seasons.

The hopes for this plan are twofold. They are hoping to have some better options to help them overcome another visit from the injury bug, particularly when it comes to pitching. They also want to create more competition for roster spots, something that we are about to dive into below.

There are really four main positional battles that will heat up when games begin in Florida next week. We've broken them down below, and have slotted the contenders in the order of likeliness — we believe — of them earning the job. It's also worth mentioning that some players can fall into more than one category, so a player vying for a rotation spot, for example, could also win a bullpen battle.

Here's an overview of the brewing fight for a handful of wide open roster spots:

The 4th and 5th starter

This is the most important and interesting battle in Clearwater, as there are two open spots in the rotation behind Aaron Nola, Zack Wheeler and Zach Eflin. The candidates:

Vince Velasquez: The 29-year-old has started 99 games for the Phillies and was signed to a one-year, $4 million deal to avoid arbitration this offseason, an early signal one of the last rotation spots was his. But more competition was brought in and it's now possible he is relegated to the bullpen. As a Phillie, VV is 27-34 with a 4.76 ERA.

Matt Moore: The Phillies haven't had a lefty in the rotation since Cole Hamels, and after inking a $3 million deal Moore has an inside track toward breaking that streak. He's a former All-Star and pitched well in Japan last year.

Chase Anderson: Anderson, like Moore, has shown he can be a solid starting pitcher in the big leagues and signed a $4 million deal. He's a reclamation project who struggled in recent seasons after posting a 3.94 ERA over his first six.

Spencer Howard: He's the organization's top pitching prospect and found his way into the rotation in 2020 where he struggled a bit. It's probably a coin flip as to whether he'll earn the No.5. spot or pitch in Triple-A.

Ivan Nova: Nova is a veteran starter with playoff experience and ties to manager Joe Girardi. He is in Clearwater on a minor-league deal and is there for depth, but has an outside shot at a roster spot.

Adonis Medina: Medina is another prospect who was probably forced into active duty too soon. He'll likely be one of the top pitchers in Lehigh Valley.

Due to the way the roster is constructed, there isn't a ton of doubt as to which outfielders will break camp on the 26-man roster. But playing time among that pool of centerfielders is up in the air. Here's who'll be vying for at-bats:

Scott Kingery: Kingery could be the Opening Day centerfielder but he might not be there everyday, as the super utility man gives Girardi unique flexibility. He will probably find his way all over the infield depending on whose turn it is to have a day off, but with no clear everyday centerfielder, there's a chance he finds himself there most often.

Adam Haseley: The Phillies are not yet ready to throw in the towel in the recent first-round pick, and Haseley has shown flashes of being able to hit at a big league level (he has a .269 career average). However, his defense and his lack of power — just five homers and 39 RBI in 333 at bats — leave a lot to be desired.

Roman Quinn: Quinn has no more options left, and will at least get one last chance to try and hit in the big leagues, something he has struggled with during stints over the last few years. He has elite speed, and if he can stay healthy he could be a valuable bench option.

Matt Joyce: The Phillies will need a lefty off the bench and Joyce could show he has some power left in his bat if he makes good on a minor-league deal.

Mickey Moniak: Could Moniak go down as one of the biggest busts in Phillies history? The former No. 1 overall pick from 2016 hasn't shown to be worthy of his draft position, and there may not be a roster spot for him to get the chance this season.

Odubel Herrera: Herrera is controversial and is last on our list, as he is not even on the official spring training roster — he is in minicamp. But, based on track record alone, the former All-Star has the best talent of any candidate to play center. His off-the-field issues that led to his suspension and ultimate demotion a few seasons ago loom large, and unless injuries to players above him on this list and incredible production in the limited chances he's expected to get emerge, his chances of being on the 26-man roster are extremely slim.

There are a few bench pieces that are more or less locked in. Brad Miller will be a utility man on the MLB club, with Andrew Knapp the backup catcher and two of the above non-starting outfielders. But if Joe Girardi goes with a five-man bench, he'll need one more guy.

Ronald Torreyes: In three partial seasons with the Yankees, Torreys hit .281 with 55 RBI in just over 600 at bats. He's a serious contender for a bench role.

Nick Maton: Maton is 24 but has no MLB experience despite being on the 40-man roster. Triple-A is a likely destination.

We've written pretty extensively about the turnover in the bullpen, including yesterday when we ranked it as the teams biggest weakness despite the changes. There are a handful of guys who we can probably pencil in as being in the 'pen for sure: Jose Alvarado, Archie Bradley, Hector Neris, Brandon Kintzler, and David Hale. And while those are surely not yet written in stone with an entire spring training ahead, we'll assume their accolades and qualifications for this year's club speak for themselves. With either two or three relief spots up for grabs, here are the borderline arms to keep an eye on:

Connor Brogden: Was a rookie in 2020 and saw a lot of action in the Phillies' disaster of a bullpen. He had a relatively respectable 3.97 ERA in 11.1 innings and has a solid chance of staying in South Philly.

JoJo Romero: Romero is a lefty who, like Brogden, made his MLB debut in the rocky 'pen last year. He will most definitely be looking to turn around his ugly 7.59 ERA in 10.2 innings.

Sam Coonrad: With a 98+ MPH fastball, Coonrad could add a much-needed dose of flame-throwing to the Phillies bullpen. He was acquired in a marginal move this offseason.

Tony Watson: Watson is 36, a former All-Star and has a career 2.80 ERA over an impressive 591 big league innings. If he can beat back age for another season, he could be a much-needed veteran arm at the back end of the pen.

Ranger Suarez: A former top prospect, the left-handed Suarez impressed in 2019 before taking a step back in limited action in 2020. If he had had more time to pitch last year he may have solidified his bullpen role. He will have a good chance to earn one in spring training.

Ramon Rosso: Rosso struggled last year as the Phillies bullpen fell apart and the team was forced to deputize prospects into duty. He is a prime bounce-back candidate.

Kyle Dohy: If not for COVID cancelling Triple-A in 2020, Dohy was on track to make it to the big leagues. He is a talented lefty prospect who will probably start the year in Lehigh Valley.

Neftali Feliz: Felix has 107 career MLB saves and a 3.49 career ERA but he has not pitched since 2017. He is still just 32 and will try and show he still has good stuff.

David Paulino: He has relieved for three seasons in the Houston and Toronto bullpen and is a dark horse to win a spot.

Bryan Mitchell: He has five years in The Show but hasn't thrown an MLB pitch since 2018.