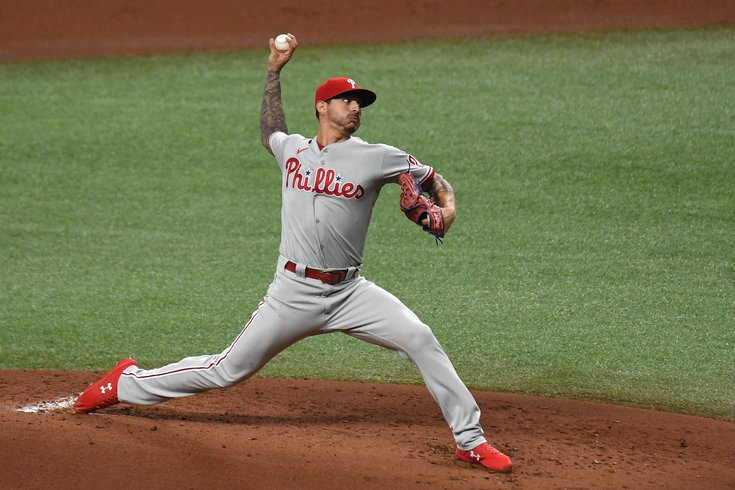 The Phillies made their first big move of the 2021 MLB offseason on Thursday night when they signed reliever Archie Bradley to a one-year deal, adding a much-needed arm to a bullpen that finished last season as the worst in baseball history.

A day later, the Phillies have reportedly reached deals with two other pitchers, and they didn't have to look very far to make the moves.

Let's take a look at the two signings...

The immediate reaction from the fanbase to seeing a headline that says something to the effect of "Phillies, Vince Velasquez reach deal" is probably going to be a negative one. But, considering the circumstances, this shouldn't be viewed as such. By signing the 28-year-old pitcher to a reported $4 million deal, they've avoided arbitration and have added some depth for relatively cheap.

Phillies and Vinny Velasquez avoid arb, agree at $4 million for 2021

Sure, Velasquez had a 5.56 ERA in 34 innings last year, but it's not like the team was expecting him to be Aaron Nola. And while that ERA was the highest of his career, he was able to lower his FIP by more than a run from his 2019 number. His strikeouts per nine number was the best of his career (12.2).

As of right now, Velasquez appears to be penciled in as the team's fifth starter, but with plenty of time left in free agency, that could always change and Velasquez could be moved to the bullpen, as he has gained experience there in each of the last two seasons. Moreover, if Velasquez does get moved to the 'pen, he's a ready option for the Phillies to move back into their starting rotation if/when one of their starters inevitably gets hurt. Last season, the Phillies needed plenty of depth in the starting rotation — and if this season begins before everyone has been vaccinated for COVID-19 (as it appears will be the case), the threat of players missing games once again extends beyond traditional baseball-related injuries.

One of the options the Phillies could look to bring in to fill out the starting rotation is Anibal Sanchez, who has connections to both manager Joe Girardi and new president of baseball operations Dave Dombrowski. More importantly, he has been linked to the team in recent days.

Without any more moves, however, the Phillies starting rotation will likely include Nola, Zack Wheeler, Eflin, Spencer Howard and Velasquez.

Prior to the signing of Bradley this week, the Alvarado trade was arguably the biggest offseason move for the Phillies — and many fans are hoping a J.T. Realmuto signing will trump all these other moves — but there was still some work left to be done with the 25-year-old lefty, who was eligible for arbitration for the first time.

All the reports suggested that he could be in line to make a little more than a million dollars in arbitration, and he and the team reportedly agreed to a deal right at $1 million to avoid the process entirely.

UPDATE: The Phillies have reportedly signed Hoskins to a one-year deal, avoiding arbitration.