How can the Phillies fix their bullpen problem? 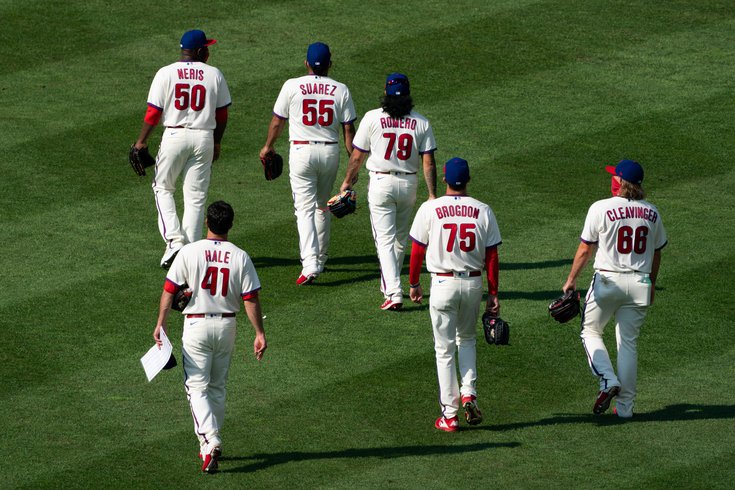 The Phillies will not be better in 2021 if their bullpen does not improve.

Last week, Phillies President of Baseball Operations Dave Dombrowski went on the radio and said the Phillies three main priorities are, in this order, the bullpen, catcher and shortstop.

A lot has happened since then — and we mean a lot — from the Eagles firing their head coach to the Sixers electing not to trade for James Harden to the Flyers starting the 2021 season and even the Phillies making some of their own headlines, with rumors swirling about not only trades for superstar players, but them potentially retaining their own stars.

After we took some deep dives into the Phillies options at shortstop and catcher, we are going to finally look at the bullpen situation, with an eye toward what they can do to address the issue (assuming they do at all).

The pressure is on for the Phillies to do something noteworthy, with spring training a month away and their hated rivals to the north improving so much that the Mets' World Series odds have skyrocketed from +3300 to +1200, according to DraftKings via TheLines.com. The Phillies haven't budged from +3000.

Here's a look at what they can to transaction-wise to solidify the worst bullpen in baseball history:

Stick with what they currently have, and hope...

This was the option we started with for catcher and shortstop, but it realistically is not one for the pen. For starters, they've already made a few moves to get outside help, though relatively minor ones as they traded Garret Cleavenger for Jose Alvarado, a Rays reliever who struggled in 2020 but has a solid track record with a career 3.46 ERA. He will help.

They also traded recently-drafted hurler Carson Ragsdale for reliever San Coonrad, as well as acquired Johan Quezada and Ian Hamilton off of waivers. A look at their four newcomers so far:

Obviously the last two signings have little by way of MLB track record. Quezada never pitched above Single-A before he jumped to the majors at age 25. Hamilton had three stellar seasons in the minors and then three pretty bad ones.

If no other moves follow, here's what the Phillies have to offer in their pen in 2021 (and for those wondering, Seranthony Dominguez is still a Phillie, but is likely to miss next season as he recovers from surgery):

That doesn't look all that bad right? Well, that's because 13 of the 24 pitchers who pitched in relief for the Phillies in 2020 are no longer with the team. Those 13 pitchers combined for an ERA of 7.81 in 100.1 innings pitched.

Here's how the entire bullpen was, collectively, in 2020:

The unit gave up 41 homers in 177 innings (2.08 per nine innings) and almost had a worse slash line against them than Joe DiMaggio had in his entire career. It was a bloodbath, and arguably one that cost the Phillies an easy playoff spot last September.

The Phillies are clearly banking on the fact that they have moved on from a large portion of the pitchers who, frankly, sucked in 2020. They are also hopeful that some of the players retained, as you can see from their career ERA's above, rebound toward the mean in 2021.

Before we explore their outside options, it's worth noting that the team's current 40-man roster includes seven pitchers who have either never appeared in an MLB game or who had only one appearance during a weird season in 2020.

There is a realistic chance they find some kind of answer out of one of the following youngsters, and all will likely be in the mix for jobs in the bullpen when spring training begins in mid-February. The stats we've included are from their combined minor league performance:

Chances are you'll see at least one of, if not multiple players listed in this section appear in the bullpen next season. The asterisked players have primarily appeared in the minors as a starter. That really doesn't mean much for this context, except that perhaps some of the prospect arms would be better utilized as a spot or injury replacement starting pitcher. Medina and Morales, particularly, are among the Phillies top prospects and are viewed as future starting pitchers. Only Medina and Llovera pitched in 2020, with the others' minor league seasons cancelled.

Most of these guys, if not all of them, will begin the 2021 season in Double or Triple-A. However, that is yet unclear as the pandemic laid waste to the entire 2020 minor league season and could make things messy and complicated again.

We'll start with the most recent rumor, that the Phillies are interested in Alex Colome, who had a ridiculous 2020. In 21 appearances, the 32-year-old reliever allowed just two earned runs, posting a 0.87 ERA. His career 2.95 ERA and 138 saves are no doubt extremely appealing as well.

Now that Liam Hendriks has signed with the White Sox, Alex Colomé will be pitching elsewhere in 2021. The Padres, Phillies, Red Sox and Twins appear to be among those in the mix for Colomé, who had two outstanding seasons in Chicago.

According to Spotrac.com, Colome's market value is around $7 million — he earned over $10 million last year. The Phillies, depending on what they do at catcher and shortstop, appear to have enough cash left under the luxury tax threshold to ink at least one big money reliever to help overhaul their pen.

Here are some other free agent options still available:

Many free agents are old. Most of them, at this point in the offseason, could likely be swayed to join the team on a one-year deal. There are dozens of arms available, both on the open market and via trade — too many for us to mention or breakdown all of them.

Expect to see a bunch of veterans inked at the last minute to minor league deals with the opportunity to compete for a job on the 40-man roster. There could also be some more marginal moves, or player for player trades in the frame of the deal that acquired Alvarado.

The Phillies will need to weigh just how much production in the pen they want to outsource, and how much they think they can develop and rely on their own guys. The biggest mistakes of prior offseasons with regard to the bullpen is the Phillies made bad decisions with free agents (like David Robertson or Tommy Hunter), and both injuries and poor performances forced them to rely too much on unproven arms they had in the minor league ranks.

If they can get that particularly difficult series of decisions correct, it could result in a much more competitive pitching staff and perhaps a team that doesn't collapse down the stretch for once.