Eytan Shander: Doug Pederson was Eagles' latest scapegoat, but he won't be the last

Will Carson Wentz be next? 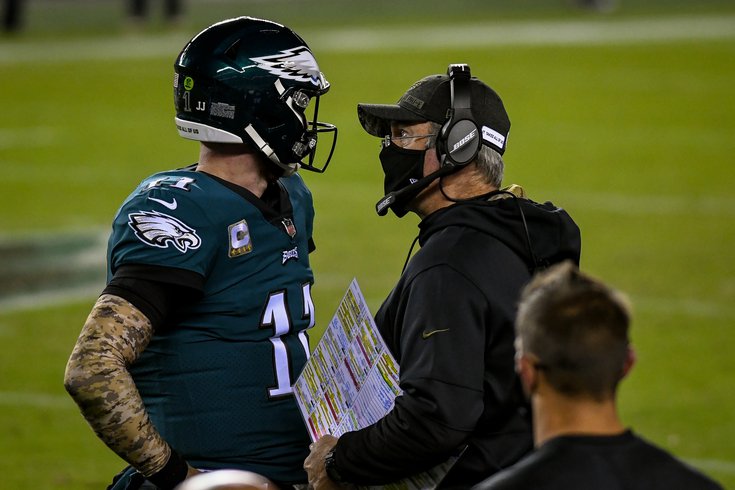 We all did. This is just another chapter in the book on subterfuge, masterfully crafted by Jeff Lurie and executed through Howie Roseman. The same one that could serve as a textbook for most universities.

I am as disgusted as the next person at how – once again – ugly things turned with an employee’s termination. From “He’s in a gang!” to “He’s a moron unfit to coach!” the mud that’s thrown seems shot out of a catapult.

Good teams don’t just fire a head coach who made the playoffs three straight years, including winning a Super Bowl. But someone had to take the fall for Roseman, and Schwartz was already out of here. Without an offensive coordinator, the only person left was Pederson. So, they trashed him in a deplorable way, the only way they know how.

For anyone who still doesn’t see the bigger issue at hand, I simply direct you to last week’s column — the one where Jim Schwartz was the smartest person in the room for bailing. Now, Pederson follows suit being relieved of his duties, but he's also no doubt in a state of relief.

No, this one is about one of the big remaining pieces not named “Roseman” or “Lurie.” It’s about a major power play in the backdrop of one of the worst seasons of regression we’ve seen in history. It’s about the continued optics of a player who – despite how good he can be – once again butts heads with a coach or player.

It’s all about Carson Wentz.

If you listened to any of Lurie’s press conference on Monday it was clear that Roseman is cemented in his position forever. Part of how this team operates is to never have the struggle be between “Roseman & ____.” Rather, it’s always two people not named Roseman. Even if they have to blame a position coach, it won’t ever be Roseman.

So that leaves the QB who is owed way too much money to trade, a history of just not working well with coaches – including the head coach as the latest casualty – and every year some sort of report seems to come out of the building about how difficult he can be.

The problem in all of this is that by forcing Pederson and other coaches out of the door, or at least by helping to facilitate their exit, Wentz has removed any shield of blame around him. We know Roseman is bulletproof. But Wentz? Not as much.

The bar is set so low for the next head coach that all he has to do is come in and not embarrass himself. Mainly because all of the people who were here with Wentz, through the good and bad, are gone. If the offense sputters next year, there’s nobody left to point to except Wentz.

That’s how he wanted it, no matter how many times Lurie and others will tell you the opposite, this is how Wentz wanted it. The latest victim in all of this was a guy who helped win a Super Bowl.

The room was cleared out and reset once again as blame was conveniently heaped on the shoulders of the coaching staff. Yes, the GM gets away with not stocking the roster, but so does the QB for inexcusable play this season. It will be – I already see it online – chalked up to bad play calling and zero innovation with the offense.

I can already see the tweets and hear the phone calls on the radio. This is all part of the deeper issue.

Go ahead and take the bait about some list of names that came out in a meeting with the owner. It might make you feel better about having a single person to blame in all of this. Of course, if you have been paying attention, you realize the deck is being stacked against Wentz despite the victory over Pederson.

That’s right. The power Wentz wields right now is a façade, a mirage, an illusion to pacify the QB until it’s time to turn him into the next scapegoat for Roseman to sacrifice.

MORE: Why would any coach sign up to be the next Doug Pederson? | With Pederson gone, Lurie leaves door wide open for Wentz to be back with Eagles

Last week I had a truly insightful conversation with FOX 29’s Kristen Rodgers – she provided the majority of it – specifically with the impact on the Eagles vs. other teams around the league. I was reminded about it when I heard Brandon Graham jump on with Jon Marks & Ike Reese on 94.1 WIP.

Both Graham on Monday and Rodgers last week echoed how vital it is for Pederson to have in-person with meetings and practice, especially through times of adversity.

You can hear Graham offer his own insights into how much of this team’s success – which is a lot over a three-year stretch – came from human-to-human interaction, specifically from the head coach.

This was Kristen Rodgers from last week’s column:

The play here is taking advantage of how strong the Chiefs are after a bye — Andy Reid and company put up points, 38 per-game to be exact. Going on that alone it’s worth taking a shot on the Chiefs total points going over 34. It’s the most likely scenario no matter how the Browns play.

If Cleveland has a strong performance on offense, then the Chiefs are going to simply reply and push this game over the total. Even if the Browns come out firing on defense, nobody is going to limit this Chiefs team for all four quarters. Kansas City has the ability to explode for two or three touchdowns in any quarter. Go OVER 34 total points for KC.

We hit you with a dose of reaction on the firing of Doug Pederson:

Doug Pederson was FIRED as #Eagles head coach, so @shandershow and @bbrooks72NBCS came together for an emergency reaction to the news!