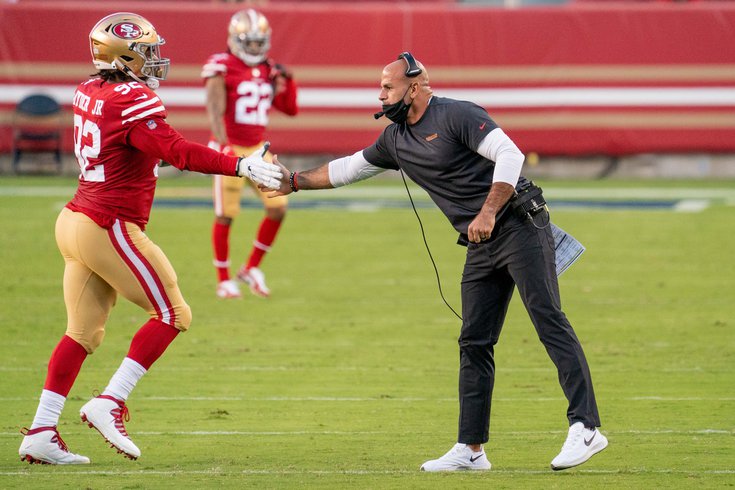 The Philadelphia Eagles have requested to interview San Francisco 49ers defensive coordinator Robert Saleh for their vacant head coaching job, according to a report from Adam Schefter of ESPN:

Eagles have requested permission to interview 49ers’ DC Robert Saleh for their HC job, per source.

Saleh would likely already be a head coach, if not for a coaching search a year ago that worked against him. He was a hot name, but because the 49ers went to the Super Bowl, and because there were only three head coaching openings, he had to wait a year.

Saleh has been around the league a bit, as he has had jobs with four NFL teams, and three colleges:

Here are the Niners' defensive rankings in the four years Saleh has been their defensive coordinator:

The Niners' defense was outstanding in 2019, and Saleh kept that unit playing at a high level (sixth in DVOA) in 2020 despite suffering an abnormal number of injuries at all three levels of the defense.

MORE: Report: Eagles have already reached out to Oklahoma head coach Lincoln Riley | What is Jeffrey Lurie looking for in the next head coach of the Eagles?

Saleh is known for his demonstrative emotion on the sidelines during games, something his players seem to respond to:

If the Eagles were to hire Saleh, that would come as something of a surprise, given Jeffrey Lurie's strong leanings toward offensive-minded head coaches, though it is believed that Saleh could bring a Kyle Shanahan understudy with him wherever he lands:

3) Meanwhile, another HC candidate, Niners DC Robert Saleh, would likely bring SF passing game coordinator Mike LaFleur as his OC. (Both LaFleur and McDaniel have been blocked in previous years by the Niners.)

Next up: Arthur Smith.

MORE: With Pederson gone, Lurie leaves door wide open for Wentz to be back with Eagles | Why would any coach sign up to be the next Doug Pederson?