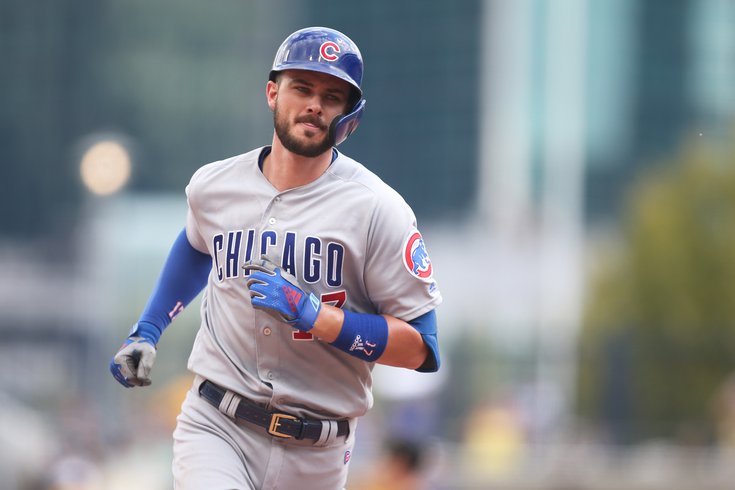 The MLB offseason is starting to heat up. Well, for some teams at least.

The Phillies sat and watched the Mets make a monster trade this past week, acquiring one of the best shortstops in baseball in Francisco Lindor from Cleveland. They also have seen the Nationals sign a big bat in Kyle Schwarber.

And as the Phillies sit quietly, considering how much to offer free agents such as J.T. Realmuto and Didi Gregorius, spring training quickly approaches.

In their inaction, the Phillies have also seen a bevy of trade rumors surface and dissipate (or in the case of the Mets, be consummated with a trade). Two such rumors arose this weekend, with word from Chicago that the Cubs are hoping to trade former MVP Kris Bryant, and the Red Sox looking to move outfielder Andrew Benintendi. Are the Phillies simply remaining in the background so that they can pounce and make a deal to keep pace with the Mets — who jumped from +3300 to +1200 to win the World Series with their recent moves, according to TheLines.com?

Or are these two players too pricy or bad fits for the club?

Kris Bryant, 3B, corner OF

Let's start with Bryant, who has been rumored to the Phillies a handful of times before. The Cubs appear eager to rebuild, and Bryant's $18.6 million contract in 2021 and impending 2022 free agency make him an understandable trade block candidate. That's strike No. 1 for the Phillies, who clearly do not have the best track record at trading for a team-controlled All-Star player and retaining him when free agency hits (Realmuto, ahem).

Even if the Phillies were a) willing to take that risk, b) comfortable assuming the $18.6 million for this season and c) willing to cough up the prospects it would require to trade for Bryant, he would not be a particular fit with the roster as currently constructed.

Philly already has a third baseman in Alec Bohm, who is not going anywhere. He can play first as well, but that would mean the Phillies would be forced to either move Rhys Hoskins (or perhaps Bryant) to a corner outfield spot to play regularly, and then move either Andrew McCutchen or Bryce Harper to play centerfield — a spot they currently have no everyday player penciled in to play.

Could they negotiate a team-friendly deal for the 29-year-old Bryant? It would make no sense without an extension in mind, as the team is not built to compete for a World Series this season. Bryant had a down year in 2020, hitting .206 in just 34 games, but his career numbers suggest he'll bounce back with aplomb (he had a wrist injury). If the Phillies want to get better power numbers playing in hitter-friendly Citizens Bank Park, they can't find a better bat than Bryant. The only way this deal makes sense for Philadelphia, though, is if they can get Bryant for Hoskins, and have the former agree to an extension.

Benintendi is a different story. First, his contract is relatively team-friendly, as the 26-year-old will earn $6 million in 2021 and has one year of arbitration ahead of him before hitting free agency in 2023. That's roughly the same contract situation Realmuto had before he came to Philly. Benintendi is younger, and has ties to Dave Dombrowski, who drafted him in Boston in 2015 and saw him make the quick jump to the big leagues a year later. Dombrowski reportedly had interest earlier this offseason (and still may) in another former outfielder of his with the Red Sox in Jackie Bradley Jr. Benintendi. however, is younger and cheaper.

According to multiple sources the #RedSox have been in serious trade talks with multiple teams re: OF Andrew Benintendi looking for prospect(s) type return with emphasis on P & OF....nothing imminent though

The Phillies have numerous pitching prospects they would be able to part with, like Francisco Morales, Adonis Medina, JoJo Romero and more. Frankly speaking, other teams have had better success of late with Phillies pitching prospects than the team itself has (Sixto Sanchez, ahem). Depending on how many pieces Boston wants, there could be the ingredients for a deal.

If the price is right, where would Benintendi play? Though he's played the majority of his innings in left field, he has played 75 career games in center. He is a left-handed bat, something the Phillies don't have much of in their line up aside from Harper. His 162-game averages through five seasons are 17 homers and 87 RBI with a .273 career batting average. The production is there, and the two years of team control gives the Phillies time, in theory to better formulate a plan for their future and perhaps get back in the black after losing a bunch of revenue due to COVID-19 in 2020.

Time is running out, and Dombrowski will certainly do something. He's not known for his failure to complete transactions, that's for sure.