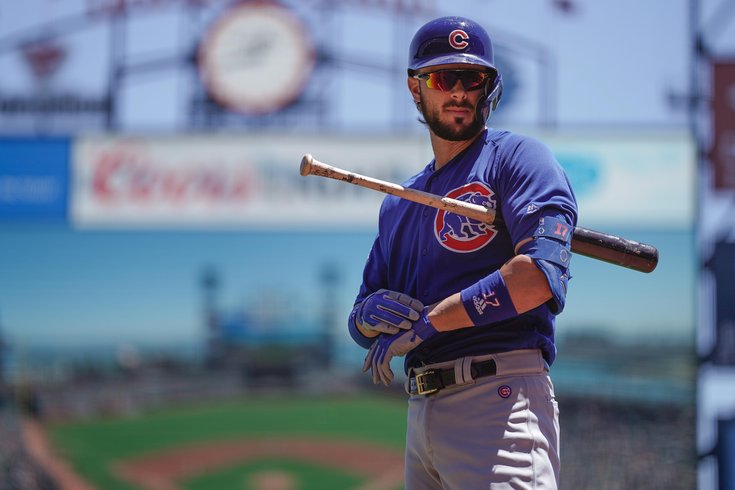 You know that gaping hole NL East teams have at third base right now? Well, according to USA TODAY's baseball insider Bob Nightengale, Kris Bryant is "on the clock" and could be the next big piece to be traded on the MLB hot stove.

A day after word broke of a monster blockbuster trade sending Mookie Betts from Boston to L.A., the buzz is that the Cubs are looking to make a similar move as they plot a rebuild under the luxury tax threshold.

The Phillies are one of two teams reportedly interested, along with rivals and defending World Series champs the Nationals.

Now, #Cubs third baseman Kris Bryant is on the trade clock with the #Phillies and #Nats showing at least exploratory interest.

With Nolan Arenado rumors getting quiet — at least for now — Bryant seems to be the next most likely star to be sent packing. He is 28 and a former MVP. He fills a perfect need in Philadelphia (and in Washington) as neither has a reliable option at third base lined up to start the year.

The Phillies currently hope they can either depend on a jump from Double-A to the big leagues from top prospect Alec Bohm, or a new everyday role at third for either Jean Segura or, more likely, Scott Kingery. The Nats are looking at starting Asdrubal Cabrera at the hot corner.

Neither the Mets nor Braves have a solid third baseman either, though neither appears to currently be interested in Bryant (the Braves have considerable interest in Arenado though).

Bryant, who has two years left under team control, would be a perfect fit for the Phillies and Nationals, each of whom would need to be savvy with their future signings, as Bryant's current $18.6 million would push both clubs over the luxury tax line. Philadelphia would, theoretically, have some relief coming when several players drop off their payroll in 2021, like David Robertson and Jake Arrieta, but the team is also keen on inking J.T. Realmuto to what will likely be the biggest contract ever for an MLB catcher. (And, as many readers will point out after reading this, they also need money to spend on pitching upgrades.)

The price for Bryant will likely be slightly less than the two top prospects the Red Sox landed for Betts yesterday. Expect either Bohm or top pitching prospect Spencer Howard — plus another top 10 or 15 player to make up a reasonable offer (with Bohm making more sense, as the Phils would be getting a prime third baseman back).

The Phillies will need to make some kind of splash — or greatly exceed expectations with their mildly improved roster in 2020 — as they are being projected by sports books to win 85 games and finish third in their division.

Bryant is the game-changing player the Phillies desperately need to help them solidify a core that can contend for championships again in Philadelphia. Bryce Harper-Realmuto-Byant is a pretty solid trio at three very important positions.

The price may be high, but the real question the Phillies should be asking is, "How can we afford not to?"