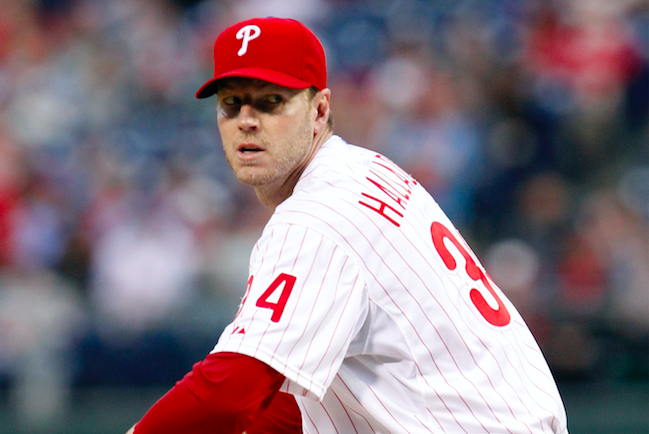 Roy Halladay will have his number 34 retired on May 29, 2020, when the Philadelphia Phillies face the Washington Nationals at Citizens Bank Park.

The Philadelphia Phillies will honor the late Roy Halladay next season by retiring his No. 34 jersey on the 10th anniversary of his perfect game against the Florida Marlins.

The organization announced the retirement ceremony will be held on May 29 against the Washington Nationals at Citizens Bank Park. A six-foot high, No. 34 statue also will be unveiled at the Third Base Plaza

On May 29, the 10th anniversary of his perfect game, Roy Halladay’s number will be retired in Philadelphia: https://t.co/vOgLdrSo68 pic.twitter.com/kEB7cf7jL2

The Phillies beat the Marlins 1-0 at Sun Life Stadium in Miami, led by a dominant performance from Halladay, who struck out 11 batters and retired all 27. The final out was fielded by Juan Castro, who saved the perfect game with a tough play to throw out Ronny Paulino at first base.

May 29th, 2010 - Roy Halladay throws a Perfect Game against the Marlins

We miss you, Doc! pic.twitter.com/crL89kC19d

Halladay tragically died Nov. 7, 2017 when his two-seater plane crashed into the Gulf of Mexico. The circumstances surrounding his death were further explored last year by Sports Illustrated, which detailed his struggles with addiction after his retirement in 2013 (the Toronto Blue Jays retired Halladay's No. 32 jersey during the 2018 season). He was posthumously inducted into the National Baseball Hall of Fame last July.

“Roy Halladay made an indelible mark on Phillies history with so many spectacular moments, including his perfect game and postseason no-hitter,” said Phillies executive vice president David Buck. “His impact on the game was evident by his induction into the Hall of Fame. We are honored to have Roy join an elite group of players to have their numbers retired by the Phillies.”

The retirement of Halladay's jersey number will put him in the company of Richie Ashburn (1), Jim Bunning (14), Mike Schmidt (20), Steve Carlton (32), Robin Roberts (36), and Jackie Robinson (42), whose number was retired league-wide.