And his widow Brandy, just like her late husband, delivered a perfect pitch. 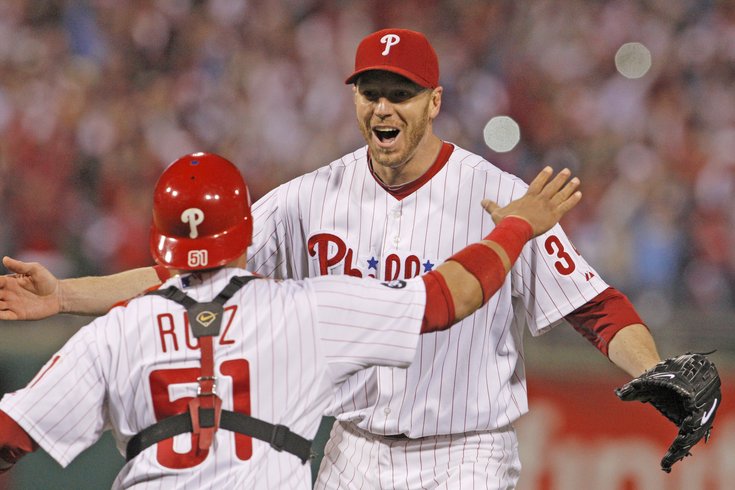 Phillies pitcher Roy Halladay and catcher Carlos Ruiz celebrate a Halladay's no-hitter in Game 1 of the 2010 NLDS against the Cincinnati Reds.

COOPERSTOWN, N.Y. – The last time I saw Roy Halladay was two years ago, after an interview with Anton Kuznetsov, the Phillies pitching prospect from Russia, on the second floor of the training center at the Carpenter Complex in Clearwater.

Exiting the deserted building, there was one open door in a long hallway. And there was Halladay, who had been hired to work for the Phillies, hanging a bulletin board in his new office. We chatted for a few minutes.

Two months later he was killed when the small plane he was piloting crashed into the Gulf of Mexico.

Turns out, from everything we’ve learned since, he wasn’t happy after all.

Baseball players are our constant summer companions. We spend virtual time with them night after night. We know where they’re from and when they’re celebrating a birthday and when their wives have babies. We know how much money they make. High-def television makes them seem so close. Our emotions become entwined with their successes and failures.

We don’t know them at all.

Halladay was posthumously enshrined into the National Baseball Hall of Fame on Sunday. It’s the highest honor a ballplayer can receive and usually an occasion of unalloyed joy. With apologies to Disneyland, on Induction Weekend this tiny village in upstate New York is the happiest place on earth.

Not this year. Not, at least, when it came time for Doc – we all had the right to call him by his nickname, right? – to formally join the best of the best in baseball history. That part, following Mike Mussina but before Harold Baines, Lee Smith, Edgar Martinez and Mariano Rivera was both upliftingly exuberant and unspeakably sad.

RELATED: On the night of Roy Halladay's untimely passing, the collective heart of the Phillies family breaks

It was impossible to not be acutely aware that he should have been on that stage, should have basked in the appreciation, should have enjoyed one last standing ovation. And the only reason he wasn’t was that he got into his plane with narcotics in his system and flew, dangerously and erratically, and was killed as a result.

This was a guy who was famously so meticulous about preparing for his next start that he didn’t drink.

A story in Sports Illustrated last week reported that he’d been to rehab and hinted strongly that he may have been suicidal.

We don’t know them at all.

All of this put Brandy Halladay, who spoke for her late husband, in a jam. What could she possibly say that would make sense of it all?

She spoke for barely seven minutes, holding back tears for much of that time. She began with several disclaimers, acknowledging that she was trying to channel what he would have wanted to say. And then, just like he did so often with runners in scoring position and the game on the line, she delivered a perfect pitch.

"I think Roy would want everyone to know people are not perfect,” she said in conclusion. “We are all imperfect and flawed in one way or another. We all struggle. But with hard work, humility and dedication, imperfect people can still have perfect moments.

"Roy was blessed in his life and in his career to have some perfect moments. But I believe they were only possible because of the man who strived to be the teammate that he was and the people he was so blessed to be on the field with.”

Phillies fans were well-represented at the Clark Sports Center. Even though he spent the bulk of his career with the Blue Jays, his plaque features a blank cap. It’s a tacit acknowledgement of the impact he had in Philadelphia. So was the fact that the two organizations co-hosted a party in his honor Saturday night.

He had just two superb seasons in red pinstripes before his shoulder betrayed him. The first, in 2010, was one of the greatest years a Phillies pitcher has ever had: 21-10 with a 2.44 earned run average. A perfect game in the regular season and a no-hitter in the playoffs. His second Cy Young Award.

RELATED: For nearly 20 years, from baseball fan to beat writer, Roy Halladay was a personal favorite

It’s possible to applaud that part of his legacy and many did. Chris Carpenter, a Blue Jays teammate and one of his closest friends, was the focal point of a short video that played before Brandy spoke. He talked, of course, about how hard Halladay had worked at his craft. And he left no doubt about how he thought this moment should be remembered.

That’s certainly an appropriate response. But so are sorrow and confusion and even anger.

Halladay excelled at what he did in part because he worked so hard to control every possible variable to become the best pitcher he could possibly be. And then when it came to the cool of the evening, when he should have been able to relax and enjoy the benefits of all that sacrifice, he apparently lost control. Of his life. Of his plane. Of it all.

Turns out we didn’t know him at all.