What they're saying: How good is the Phillies roster? How high should expectations actually be? 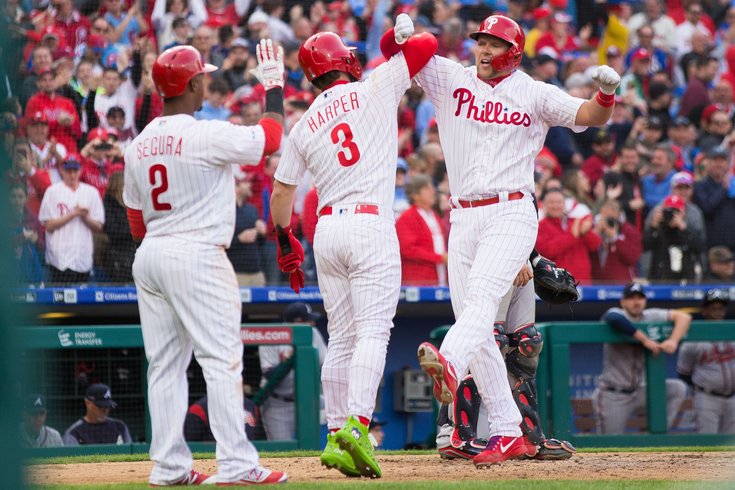 The Phillies' have high expectations — at least in Philly, where the team is on its second campaign of what is expected to be a new era of competitiveness.

But despite spending millions upon millions to add pieces like Zack Wheeler, Didi Gregoruis and a World Series-winning manager in Joe Girardi, the baseball watching world is extremely skeptical.

According to most gambling outlets, the team's over/under win total for the 2020 season is 84.5 — an increase of less than four wins over last year's middling 81-81 team, which is an improvement to be sure — just nowhere near the result fans and ownership is looking for.

In no season during the Wild Card era (since 1995) has a NL team made the postseason with 85 wins. Only twice (in 2016), has a team made it with as few as 87 wins, and that season contained a three-team tie for the final two spots.

The Phillies also, according to the data compiled at OddsShark.com, has anywhere from a 14-1 shot at winning a championship to a 20-1 shot. Interestingly, somehow, Philly clocks in with the sixth best odds of winning it all, still long shots behind the juggernaut Yankees, Astros and Dodgers — as well as division rivals the Braves and Nationals.

Trying to make sense of the NL East and predict just how talented the 2020 Phillies are is the subject of today's what they're saying about the Phillies. How high SHOULD expectations reasonably be for Philadelphia this season?

The Phillies were not nearly as aggressive as many hoped or expected them to be this offseason, but according to Seidman, they didn't have to be. The way the chips wound up falling actually benefitted the Phils despite their relative lack of activity.

All told, the NL East (aside from the Phillies) lost more than it gained this offseason. Out are Donaldson, Rendon and Dallas Keuchel. In are Hamels and Smith in Atlanta; Dellin Betances, Rick Porcello and Michael Wacha in New York; Will Harris, Castro and Eric Thames in Washington; Corey Dickerson in Miami.

Aaron Nola will not miss facing Donaldson and Rendon. Those two hit a combined .345/.456/.545 with four homers and three doubles in 68 plate appearances against the Phillies' top starter.

Donaldson is also 9 for 16 lifetime against Zack Wheeler, 6 for 14 with five extra-base hits off Zach Eflin and 4 for 12 with three homers vs. Nick Pivetta. Rendon is 11 for 21 with four homers and 10 RBI off Pivetta.

Phillies fans may be frustrated by the post-Wheeler/Didi Gregorius period of the offseason, but Phillies pitchers are cool with how it's played out. [NBC Sports]

The Phillies, according to MLB.com, have two position players listed among their top 10 for each slot (the list for shortstop and third base have yet to be revealed but no Phils player will make the cut).

First at catcher, somehow Yasmani Grandal is slotted ahead of J.T. Realmuto.

There's a familiar name at No. 2, as J.T. Realmuto remains in the same spot after putting together another superb all-around campaign in 2019. He posted an .820 OPS and hit 25 homers while throwing out an MLB-best 47 percent of runners attempting to steal. [MLB.com]

The numbers suggest they got it wrong:

The offensive numbers — both historically and last season favor Realmuto. The Phillies' star was arguably the best defensive catcher in baseball last year while also winning NL Gold Glove and Silver Slugger honors. MLB.com can have Grandal to start a franchise, if it wants. But Realmuto is the best catcher in baseball.

The second MLB.com choice was Bryce Harper as a Top 10 right fielder. The website DID get it right, slotting him sixth, as it is hard to see him being better than any of the top 5.

While we are on the subject of MLB.com ranking Phillies players, three of the franchise's prospects made MLB Pipeline's top 100 list (including Alec Bohm as their top third base prospect). Here's a brief look at what the site had to say about Bohm, Spencer Howard and Bryson Stott:

The Phillies' system has been thinned out a bit, with players graduating to the big leagues and/or being dealt to help the big league team out. The addition of Bohm, who reached Double-A in his first full season and then raked in the Arizona Fall League, in the 2018 Draft and Stott from last year’s Draft helps considerably, as does the big step forward by Howard to give them a legitimate top pitching prospect. [MLB.com]

Rhys Hoskins looked like he was on track to become a premiere offensive first baseman last season, before he completely fell apart in the second half. Through 89 games, he hit .263 with 20 homers. In his final 71 games, he hit .180 with just nine. Hoskins knows he has to figure it out, and he's been tinkering with his swing all offseason long:

“It’s funny because, it probably won’t look like there are big differences, but they feel huge to me,” Hoskins said after reading “The Phillie Phanatic’s Best Rain Delay Ever” to students at St. Peter Cathedral School as part of the Phanatic About Reading program. “I think I’ve come to the realization that not all change is necessarily bad.”

Hoskins experimented with changes last summer as his season began spiraling. He narrowed his stance and shortened his stride. He closed up his front side and tried using the whole field rather than flying open and pulling everything to left field. He worked with hitting coach John Mallee, then listened to Charlie Manuel’s opinion after Mallee got fired.

In particular, Hoskins struggled to hit breaking pitches. He swung at and missed 39.6% of curveballs and sliders compared with 33.3% the year before. Consequently, he saw an increase of nearly 200 breaking pitches from 2018 to 2019. [Inquirer.com]

And finally, let's turn our attention to one of the biggest battles sure to command attention at spring training: the fifth starter's job. According to Montemurro, the last job in the rotation could come down to a duel between Vince Velasquez and Nick Pivetta, with the loser relegated to the bullpen.

For Girardi, it’s two-fold. He wants to make sure the starting pitchers are in game shape and explained he likely won’t weigh their first start or two of the spring. The pitchers’ stuff will also be really important throughout the evaluation process. Girardi values real-time evaluation; he wants to see the type of swings hitters put on pitches and if a pitcher is able to generate swings and misses. Locating the ball consistently is a must.

“Then you look, if two guys are close and you think that one pitcher has a much better opportunity to be successful in the bullpen than the other, you do it that way,” Girardi said.

Not every pitcher is capable of successfully switching from starter to reliever. It’s not as simple as having a power arm with a fastball that consistently sits at 95-plus mph. Last season, the coaching staff pointed to Velasquez’s need for routine as one of the reasons he returned to the rotation after three weeks in the bullpen. Meanwhile, Pivetta’s performance cast some doubt on whether he could be a big-league starter.

They both get another chance to prove they deserve to start. A spring competition should bring out the best in Velasquez, Pivetta and other pitchers vying for the No. 5 spot — non-roster invitees, particularly any veterans who are signed before camp opens, will be in the mix, too. Depth at Triple A, in the Cole Irvin and Ranger Suárez mold, could also get a look. [The Athletic]