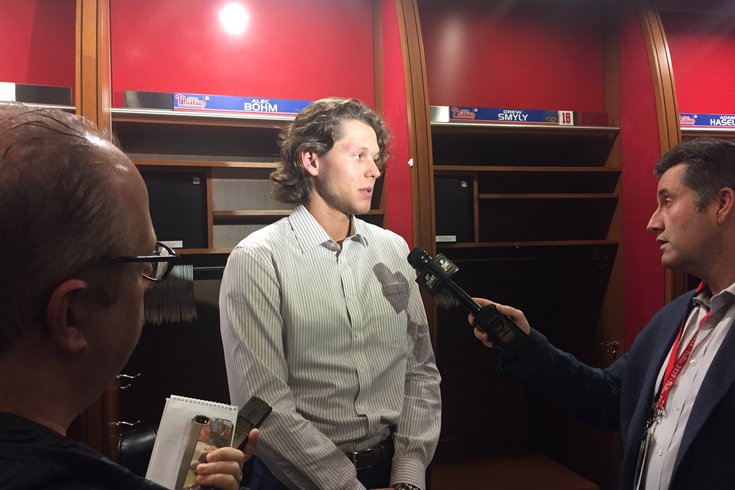 Two years ago, Alec Bohm was a 21-year-old college student getting ready to start his third baseball season in Wichita, Kansas. Juggling school, a social life and a serious baseball career was taxing, which is one of the reasons why the career .317 hitter in the NCAA ranks took the Phillies up on their offer to sign him after a first round selection in the 2018 draft.

Two years later, Bohm has propelled himself onto the national scene. He is the Phillies' top prospect and a player many project as the future franchise third baseman.

Bohm walked into Citizens Bank Park Wednesday, along with a dozen or so other prospects as they prepared for spring training and various other events. Answering questions in the big league clubhouse for the first time, he saw his future.

"It's hard to not do that when you walk through the clubhouse," Bohm, tall and slender with wavy blonde hair, said with a smile. "The stadium and the concourse, you get those pictures in your head that this is a reality."

Bohm walked past plaques honoring Roy Halladay and Steve Carlton's Cy Young awards and stood in a locker room that 12 years ago witnessed a World Series celebration. He should have been positively giddy. But he was serene and had his game face on.

What he is doing is torching his way through the minors:

In 184 total games — just under a season and a half (including the fall league), Bohm has ascended through six levels of the minors. It takes most players years to do that, if they can do it at all. He's also hit 21 combined homers and 97 combined RBI at both third and first base.

Oh yeah, he also played for Team USA, starting nine games this fall. You could say it's all going the way he drew it up, but Bohm — a business first kind of young man — doesn't see it that way.

"Going into it, I didn't set a timeline like, 'I want to be there in two years or three or four,'" he admitted. "For me, going in, I wanted to stay healthy. Coming into my first full year I had some success and put myself in a really good position to start my dream of being a Major League Baseball player."

"I think that can be a slippery slope," he added, "trying to put a timeline on things. For me, I just want to focus on myself, where I'm at at the current moment."

The Phillies, in addition to inviting him to camp after just one and a half season in the minors, are giving the prospect a subtle but hard-to-ignore vote of confidence. Instead of ponying up big bucks for Josh Donaldson or Anthony Rendon to man the hot corner, the team felt that between their ultra-utility man Scott Kingery and up-and-coming Bohm, they were good at the position.

In camp, Bohm hopes being exposed to All-Star caliber major leaguers every day will help him make yet another jump.

"I am really excited," Bohm said. "For me, starting with a short season and having a slow start to my career, and then getting up to Double-A last year is something I am pretty proud of. Now I am able to experience my first big league camp and work alongside guys like [Rhys] Hoskins and [Bryce] Harper and see how they go about their business, [that] is something I am really excited about."

Bohm's busy two years will no doubt continue, as March 27th will be a key moment during the spring. He'll either ascend to a spot on the Phillies' 26-man roster, or he'll suit up for Team USA once again.

For all his relaxed answers, Bohm did perk up when he was asked to imagine playing in front of Philadelphia fans for the first time in Clearwater next month.

"I'd say they're the most passionate fans in the sport, I'd say that for all sports," Bohm said. "They'll support you to no end, but you have to give them your full effort."