Phillies prospect watch: When will Alec Bohm make it to the show? Spencer Howard? Mickey Moniak? 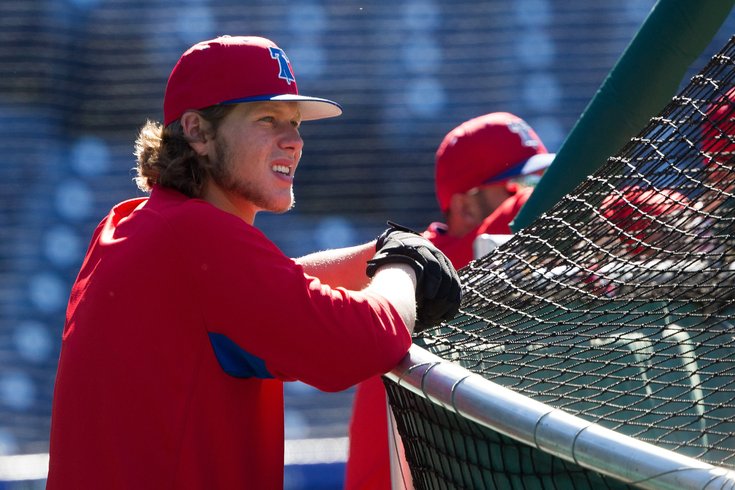 Alec Bohm projects as the Phillies' third baseman of the future.

With a month until pitchers and catchers report for the Phillies to spring training, most of the team's slate of players for Clearwater has been set — with one big exception: their prospects.

It is yet unknown which of their youngsters will get the chance to try and play their way onto the 26-man big-league roster, but there is a tradition in Philly of prospects impressing in camp and seeing dividends down the line shortly after. Last February and March, outfielders Mickey Moniak and Adam Haseley got meaningful reps with the Phillies and Haseley was called upon to join their ranks not far into the season.

Which of the team's top 10 prospects (according to Baseball Prospectus) will get their big break in 2020? And how far from being big league ready are the ones who won't this year? Here's a look at our MLB ETA projections:

Howard is the top arm in the Phillies farm system and looks to have an outside chance of earning a spot in the rotation this season, competing against familiar names (and busts) like Zach Eflin, Vince Velasquez and Nick Pivetta.

In his ascending 2019 minors campaign, Howard made 15 starts across four different levels of competition and went 3-1 with a 2.03 ERA. While many are concerned with control as his number one weakness, Howard struck out 94 while walking just 16 in 71 innings.

There's a good chance Bohm has figured into the Phillies lack of attention to third base this offseason. Though Scott Kingery is likely the odds-on favorite to start the year at the spot, Bohm is the most likely of the top 10 to appear in big league camp and look to show he has what it takes to be on the squad.

Bohm was drafted in 2018 and has just one full minor league season to his credit, but quickly rose from the ranks of Single-A to Reading with a .305 batting average and 21 homers over 122 games in three different levels of the farm system. He projects, the Phillies hope, as their third baseman of the future.

Morales needs fine tuning but could be a solid bullpen arm, if not an end-of-game reliever in the majors someday. He was an internationally signed player (not drafted) and at age 20 actually started 15 games in 2019. As both a starter and reliever, Morales had a 3.82 ERA in Single-A Lakewood. At 6-foot-4, the big arm has a 96 mph fastball already.

Stott, Philly's first-round pick a year ago, was a college star and as such he will be expected to make the jump to MLB competition rather quickly. However, he hasn't had many at-bats as a pro baseball player yet and will be expected to jump to Double- or Triple-A during 2020. If he makes quick work of these challenges, he could be a spring training invitee a year from now.

Medina is a name most Phillies fans probably have heard, as he spent some time as the team's top pitching prospect. As a member of the team's current 40-man roster, he will be at spring training and will be one of the players expected to contribute in 2020. The Phils may opt to start him in Lehigh Valley, to determine whether his down 2019 season, after impressive campaigns his first few pro seasons, was just a fluke.

Garcia is a player with impressive tools, but at 19, he hasn't shown much yet. He's listed as BP's No. 6 prospect for the Phillies based mostly on potential, as he hit .186 during a down year in Lakewood in 2019. A 2022 ETA may be optimistic, but if he can show improvement to justify his top 10 spot it is still an attainable goal.

Moniak has been inconsistent in the minors since being tagged as 2016's No. 1 overall pick. The outfielder has shown flashes but has not looked ready to contribute yet. Still, at 21-years-old, that's OK. It doesn't really look like the team will have a spot open when training camp breaks for Moniak, but if he can handle the bat well in the high minors he may be the first bat added to the team when a need does arise.

A 19-year-old international signee, Rojas is a new addition to the top prospect list after an impressive showing in rookie ball. Just 19, Rojas can hit for average, run, and get on base and could be a leadoff hitter in the way, way future. He has a lot of work ahead to get on Phillies fans' radar.

A 20-year-old inked out of Venezuela, he's kind of like Carlos Ruiz but with a little less power and a little more batting average. He's small but athletic and has a great arm. If the Phillies can work him into Double-A sometime in 2020 they'll be pleased. He could be a big leaguer two seasons from now.